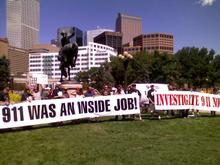 Photo by Kristi Mohrbacher © The Rocky

CIVIC CENTER — Chanting “9/11 was an inside job!” protesters congregated here before hitting the parade route this afternoon, cameras in hand to document everything that happened and supply their live feed to those watching online.

Organized by We Are Change, the march brought calls of “9/11 truth now!” and signs calling for an investigation of the Sept. 11 attacks.

We Are Change has been filming protests this week in an effort to catch illegal action — whether by protesters or cops.

Luke Rudkowski, founder of We Are Change in New York, told the crowd it can’t rely on the mainstream media.

Besides protesters carrying banners and signs, there was a bus in support of Buddy Moore for U.S. Senate for Colorado and a trailer with a chain-link “cage” on it. Labeled “God’s Gitmo,” it had protesters wearing rubber masks of George W. Bush, John McCain, Barack Obama and others inside.

People stopped to watch the group proceed by.

“Rabble-rousers rousing a whole lot of rabble is what it is,” said James Baum of Ohio as he sat on his bike and waited for the march to pass. “People can find anything to protest.”

As Ellen Gilman of Denver passed, she pointed at the group and told her friend, “That’s democracy in action.”

When asked what she thought of the protest, Gilman said, “They won’t be happy until somebody agrees with them.”

Arlette Lucero of Denver said she was marching to raise awareness and get people asking questions about what happened on Sept. 11, 2001.

“A lot of people are not willing to listen,” she said.

“That needs to happen,” she said.