A number of 9/11 Truth activists converged from San Jose, Los Gatos, the East Bay, the Peninsula, San Francisco to make a sizable contingent with multiple banners and many, many signs at the anti war rally at Justin Herman Plaza and in the march. After much police harassment at the Civic Center for attempting to attach our large banners to trees, we broke down and bought a decent awning, so that we could legally put up our banners, and fend off the rain. The weather report was not promising, nor the looming clouds when I left Palo Alto at 8 am heading north. It is hard, if not impossible to pass out flyers, and not ruin our sound system, books, and educational materials when it is raining, and the turnout at rallies and marches is certainly smaller when the weather is bad.

The favorite spot of the Northern California 9/11 Truth Alliance at the Civic Center is away from the stage facing south, outside of the trees, where we generally have hoisted a giant banner of the Deception Dollar. Often the center of the Civic Center is full and the traffic is better on the outside. When we arrived at the Civic Center- all of the awnings had been set up on the inside of the trees which indicated that a small turnout was likely. Dedicated peace activists are part of a community and we help one another out and work together. We saved a spot for Bonnie Faulkner, host of KPFA’s Guns and Butter; George Johnson of Veterans for Peace, in addition to setting up the booth for Veterans for Peace, provided an extra awning for Bonnie, which many of us helped to put up.

We had printed 500 flyers for the upcoming Richard Gage, AIA (Founder of Architects and Engineers for 9/11 Truth) event on Saturday March 28th at Berkeley Fellowship of Unitarian Universalist Hall, 1924 Cedar Street in Berkeley, as well as a number of other film screenings, speaking events, actions and our upcoming meeting to pass out at the rallies and on the march. We left some at the Civic Center and took the sound system, plus more generic educational flyers to Justin Herman Plaza via BART. We were a bit late for the rally, but glad to see many large 9/11 Truth banners, and signs, actually we had almost more than we could feasibly carry and all the cars were parked at the Civic Center, so it was a logistical challenge to find enough people to carry everything. The number of people was disappointingly small; I was expecting between 5 and 15 thousand, but I wondered if there were even a thousand people. Sometimes people will go to one end of the rally or the other or avoid the rallies totally and just participate in the march, it is impossible to count noses and those in helicopters might be able to figure out the numbers more accurately. I did see lots of familiar faces and old friends. I didn’t have much trouble finding people to carry our 9/11 TRUTH NOW signs or passing out our flyers. Probably more Deception Dollars have been passed out in San Francisco than in any other city, so I didn’t really push them, but a few people noticed them, and hadn’t seen them before, and asked for them. It began to sprinkle and I had to struggle to protect the equipment and paper. Musician, Vic Sadot was gathering interviews for NO LIES Radio. The speeches were the usual, predictable condemnations of the criminal behavior of the war making government and the increasingly blatant criminality of the entire capitalist system. 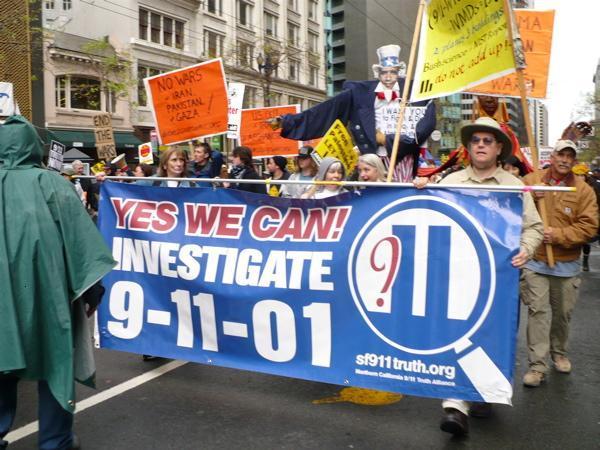 As the march proceeded down Market Street, there was a distinct bottleneck as the crowd tried to get in. The police had blocked off the entire street, so we had all the lanes, in addition to a police escort much of the time- which made it more challenging to pass out flyers and interact with the general public, caught by surprise, observing us from the sidewalks. There were multiple musicians, sound systems, chants from the various groups in the march. It was a challenge for any group to stay together without a giant tall prop/sign or sound system to help a group find itself in the midst of a giant crowd, moving forward. I had trouble with my sound system, and trying to help carry an incredibly awkward box, our extra box of flyers, an extra sign. I had a microphone and an ipod with 9/11 Truth songs mixed with Impeachment songs. I tried to lead a few chants, realized our favorite chant was outdated and finally gave up on chanting and switched to the music system. The 9 watt system has a pretty small range, so I received a few complaints, but many people appreciated it, and it was one of the few ways to get out our message and salient facts beyond the tiny visual soundbites we could fit on a banner or sign.

Generally anti-war rallies attract the most people when they are trying to stave off a war, once the war is “in progress” numbers diminish. Unfortunately, under a new administration, it seems that people have been lulled into the false belief that the war will end or diminish under Obama. In California, at least, there are greater turnouts against the war when the wars are being waged by Republicans rather than Democrats. However, compared to some of the old-timers, I am still relatively new to this. I missed all the anti-war rallies against the first Gulf War. My activism didn’t begin until 1992, when Clinton was elected.

Organizing has also evolved with the spread of the internet, there are more, smaller, local events, happening simultaneously across the country and across the world. Many people are deeply offended by ANSWER and refuse to attend their rallies and marches. United for Peace and Justice was created by a coalition of groups who did not want to be led by ANSWER. There are a multitude of smaller peace groups scattered across the world, and the US. For years the Truth movement has tried to join in alliance with the Peace and Justice movement, with varying success from locality to locality. The Truth movement finds allies most often
with grassroots activists and finds the most resistance at the heads of larger organizations who are simply frightened to take a position, or fear the backlash should they take a stance. Despite the fear of being public about 9/11 Truth, the majority of people do question or doubt the official version of events and suspect that the government either “allowed it to happen” or “made it happen.”

At past anti-war rallies and marches we have passed out large numbers of signs and flyers, wheeled a huge replica of the 9/11 Report with enormous holes in it through the streets, as well as an evolution of large banners. Numbers and level of organization has always been problematic for us, as getting 9/11 Truth activists to work together is often compared to herding cats. Making picket signs, passing them out is a big job and they usually do get lost in the sea of protesters. 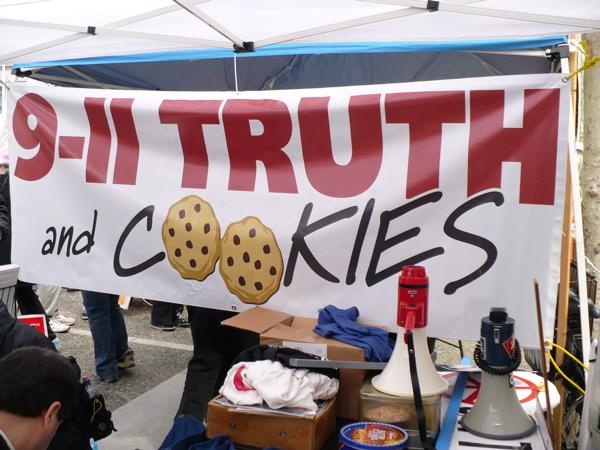 When we reached the Civic Center, I hurried to help out at the booth. We always had lots of people at our table. I received an email the next day from my friend, Dennis Riley of Veterans for Peace: “I saw you in your booth today and FYI you had the busiest booth. I wanted to say hi but you were way too busy.” Perhaps the new banner and offers of cookies had a little to do with the popularity of our booth. However, we always have the most popular booth (and although I usually bake cookies- I usually don’t have enough to offer them to  everyone at the anti-war rallies).

However the Civic Center never began to fill up with people. Some people wandered around, visiting the booths. There was a small crowd near the stage. The pro-Israel folks were across the street. There was some brutal police violence against an 8 year old Palestinian kid who was on a skateboard and a few other people, which drew a crowd and the organizer, interrupted the rally to tell the police to back off. Between the police aggression and the rain the people did disperse for the most part before the rally was formally over.

One of our staunchest tablers said that he would never attend another ANSWER rally, however I was glad that we were there. We passed out all the flyers for our upcoming events; we definitely were visible and felt the support of the peace movement. We also received a stark reality check of what we are up against. I suspect the calculated violence against a child and protesters was designed to frighten more people away from anti-war rallies.

A recent Rolling Stone article, entitled The Big Takeover- The global economic crisis isn’t about money – it’s about power. How Wall Street insiders are using the bailout to stage a revolution by Matt Taibbi succinctly notes:

“The mistake most people make in looking at the financial crisis is thinking of it in terms of money, a habit that might lead you to look at the unfolding mess as a huge bonus-killing downer for the Wall Street class. But if you look at it in purely Machiavellian terms, what you see is a colossal power grab that threatens to turn the federal government into a kind of giant Enron — a huge, impenetrable black box filled with self-dealing insiders whose scheme is the securing of individual profits at the expense of an ocean of unwitting involuntary shareholders, previously known as taxpayers.”

As long as people remain frightened, they remain easy to control, to exploit, to loot. That is why non-violent movements are such a threat and there are so many efforts undertaken to destroy, co-opt, subvert movements. So much wind was sucked out of the movements to elect Obama, in hopes of changing course, but what we see is a change of rhetoric with horrific “continuity of government.” We need to continue to organize, be courageous, inspire resistance, oppose the consolidation of empire, and the trampling of human rights. We need to challenge the war criminals, the torturers, the looting of the world. We need to inspire, create and strengthen local efforts to meet human needs and fend off the looming privatization of the commons by the corporate financial vultures who feed off death industry and the controlled demolition of the economy. We need to continue to champion truth, expose the lies and deceptions. We have a daunting task ahead of us.

The day after the anti-war rally, I received a call from a journalist, in addition to being a journalist, he was also a publisher, who started a major city independent weekly and sold it off years ago. He was working on an article featuring Richard Gage. I was heartened by his courage and hope that more and more journalists will realize that their job is to serve the public and that the public is abandoning the corporate press which has fed them so many lies over the years. Both press and the government are losing the public’s trust and their legitimacy. More and more, people are turning to the internet and one another for the critical information to help us understand what is truly happening in the world today, so that we can do something about it, and not be helplessly swept away by the flood of events.

Why Resistance is Essential

Facing the Shadow: How We Can Take Back Control