Today was a historic day that went completely unnoticed by the main stream
media in Denver Colorado. September 11th questioners have become accustomed to
such blatant disregard, so I felt that call to “be the media” with this article
for my friends, Brother Raymond and Brother Elliott. This is what should have
been but was not reported on by the Denver Post, The Rocky Mountain
News, and other media outlets in the Denver area. 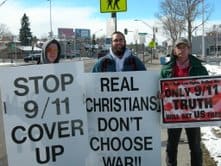 Today, these young truth seekers embarked on a journey which will not
only test their physical endurance and mental clarity, but will also
call on them to rely more heavily on their faith than at any other
time in their lives. After a two hour rally on the capitol steps in
Denver, Brother Raymond and Brother Elliott began their Denver to D.C.
Walk for Truth in protest of the illegal and un-Constitutional wars in
Afghanistan and Iraq and the crimes of 9-11 and subsequent cover-up.

I first met Brother Elliott not long after I went public with my 9-11
activism here in Colorado. I was impressed with his enthusiasm for
the truth, and specifically for 9-11 truth. I was also impressed with
the fact that Elliot was only 19 years old when we first met. Elliott
contributed much time in our efforts here in Northern Colorado,
helping to organize town hall meetings, video screenings, burning
DVD’s and more. When he broke off from our group to do other things,
I fully supported his decisions, but his help was very much missed.

I met Brother Raymond in 2005 when he approached me about helping our now well established group, Colorado 9-11 Visibility. Every year in
Fort Collins Colorado, they have a big street festival called West
Fest. Raymond had reserved a booth on the street, a cost of $300, and
offered to share it with Colorado 9-11 Visibility free of charge. We
gratefully accepted and brought all our signs, banners, and of course,
flyers and DVD’s to the booth for the weekend long event. We talked
to hundreds of people over that weekend and gave out over 600 DVD’s.
It was amazing the reception we were getting, as it was about this
time that public attitudes toward 9-11 truth were becoming much less
hostile. Brother Raymond again offered his booth the following year
in 2006.

Raymond and Elliott recently approached me and told me of their plans
for a protest walk across the country to protest the wars. I was not
surprised to hear that they were including 9-11 truth on their
platform. I also was not surprised to learn that they were aiming
their message at Americans who identify themselves as Christians.
This is perhaps taking from the lead of Dr. David Ray Griffin, who in
2006, published his book Christian Faith and the Truth Behind 9-11,
which was targeted at Christians who support the regime of G.B. Bush.
The brothers, as indeed does Dr. Griffin, recognize the need to
educate the “religious right”, which are unilaterally credited with
giving the majority of the support to the regime. I was excited about
their plans, knew that they would indeed carry through with them, and
interviewed them both on my program, Visibility 9-11 to give them much
needed publicity. This program was low on popularity, perhaps because
of the religious tone, but nonetheless, and whether one identifies as
religious or not, one cannot deny the importance of appealing to this
particular segment of American society as it represents the core of
support for the current regime.

Funding for this journey is vital, and even though Brother Raymond
sold his business to help with the expenses, it would not be enough to
complete their protest march. To help with the expenses, the brothers
have produced two new documentaries. When Brother Elliott first told
me that they were working on some new films, one on the Iraq war and
one on 9-11, I was somewhat skeptical of what the final product was
going to look like. Video production is not exactly easy and I was
not aware of any other films they had made. I took a wait and see
approach. When Elliott phoned me and wanted to interview me for the
9-11 film, I was like, sure, c’mon over. I honestly didn’t take it
very seriously but still gave him what I thought was the best
interview I had. A week after Elliott interviewed me for the 9-11
film, they had a fund raiser and screening of the Iraq documentary
they had produced titled Iraq; The Death of Reason. I attended this
function and was very impressed with the job they had done. A week
later, they had the 9-11 film finished, 9-11; The Birth of Treason,
which contained portions of interviews with Dr. Steven E. Jones, Kevin
Ryan, and Dr. Kevin Barrett, and myself. I was astonished at how
quickly they produced these films and how nice of a job they did. I
recommend them not only for their content and their target audience,
Christians, but because this is in part how they are funding their
walk across the country. They can both be viewed for free at the
links above. Purchasing them through the Beit Shalom Ministries
website is optional if you feel the need to support their efforts. I
hope that you will do this.

I found out last week that the brothers were holding a rally at the
capitol in Denver to kick off their journey. I wanted to be there,
and despite it taking place on a work day, I took the day off to
attend the rally. As I thought about the rally, and the walk, I
thought to myself , “Wow, that’s a long way to walk!”. But I also
thought that without actually doing it, one would never be able to
imagine just how LONG of a walk this would be. Despite this, I
decided I wanted to walk the first couple of miles with them in a show
of support and to try to appreciate what the brothers are doing. Not
knowing Denver all that well, I figured I would park my truck along
their route out of town, walk down to the rally, and then begin the
walk with them as far as my truck. As I began walking, I quickly
realized I had parked A LOT further away from the capitol than I had
originally planned. I didn’t attempt to measure it but we figured it
to be 4-5 miles. By the time I got to the rally, I was feeling the
distance…and this was maybe 5 miles! So all in all, I walked maybe
10 miles yesterday to help them kick off their journey, and not being
used to walking this far, I have to say that I will probably sleep
pretty good tonight. Try this sometime. Go out and walk 10 miles.
If you are not used to walking this distance, you will gain an
appreciation for the magnitude of this journey.

As we walked east on Colfax Avenue carrying big signs, we got many,
did I say MANY, very positive responses not only from people in their
cars who were honking and giving us thumbs up, but from people walking
up and down the street and in businesses, who went out of their way to
come and talk to us, Brother Raymond handing out copies of the 9-11
DVD to all those interested.

As we got to Jackson Street, which was where I had to depart North to
my truck, I said goodbye to the brothers. I offered a short prayer
asking for divine protection and provision for these two who were so
boldly going out of their way for truth, justice, accountability, and
faith. One of their main slogans reads, “Real Christians Don’t Choose
War”, and in demonstrating their opposition to the war and the 9-11
cover-up, they choose to put their money where their mouth is when it
comes to their own personal brand of activism.

As I watched Brother Raymond and Brother Elliot continue eastward on
Colfax Avenue, I thought to myself, “I hope they know what they are
getting themselves into.”. But as I thought about it more, I answered
my own doubt, thinking, they absolutely do know what they are doing.
In the haste of my thought about the safety of my friends, I had
overlooked the fact that this is a journey of faith and love. It’s a
journey to bring light to lies and injustices committed by a
government which is supposed to represent us. It is a noble endeavor
which could be a lesson to us all. I certainly don’t think that this
walk for truth is a mistake, but it reminds me of something my dad
used to say to me. He used to tell me, “You show me a man that isn’t
making mistakes, and I’ll show you a man that isn’t doing anything.”.
Brother Raymond and Brother Elliott, whether you believe in their
message or not, are teaching us all a lesson. That lesson is to
follow your heart and do something to save our country.

For more information on the Denver to D.C. Walk for Truth and the two new
documentaries by Beit Shalom Ministries, Iraq; The Death of Reason and 9-11;
The Birth of Treason, and to learn how you can support this effort, visit their
website at beitshalomministries.org.