By Will Bunch
Attytood – Will’s blog at Philly.com

UPDATE: Corrected and edited to reflect the fact the one of Colin Moynihan’s earlier blog posts was reverse published in New York Times editions delivered to New York City residents — but not here in Philly and elsewhere — still doesn’t change the basic fact of undercoverage, at least until the mass arrests and pepper-spray incidents in the second weekend.

What do you think was running in the pro-government, pro-Mubarek newspapers in Egypt back in February, when crowds of unhappy and often un- or under-employed citizens began crowding into Tahrir Square? I don’t know the answer to that, but I’m going to go out on a limb and say there probably wasn’t a lot of coverage of what was happening in Tahrir Square, at least at first. They were probably running cute feature stories about an old-time falafel stand in a changing Cairo neighborhood, or maybe articles on parking problems at the Great Pyramids. They certainly weren’t going to call attention to the elephant in the room that was about to knock over a corrupt and decadent society. 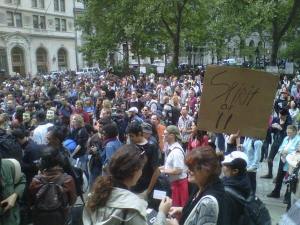 I was thinking about that this week, during the extra time I had on my hands because I wasn’t reading in the pages of the New York Times or the Washington Post about the Wall Street protests that have been going on now for four days, with hundreds of disenchanted and disaffected youth camping out nightly in a lower Manhattan park, marching on the financial district by day, getting arrested and provoking a large police presence including a phalanx of NYPD cops guarding the notorious Merrill Lynch bronze idol of greed.

Editor’s Note:
Once in a while a journalist truly shines through. Will Bunch has consistently done so.
Thank you, and bravo, Mr. Bunch.

Call me crazy, but as a journalist marking his 30th anniversary in the news business this year, I would think that an ongoing protest like that in my hometown would at least make the local newspaper. Not necessarily on Page 1, and not even every day necessarily. But at least wedged somewhere between the various ads for Tiffany and Saks, etc.

Maybe that explains why I’ve never gotten a job at the New York Times.

Apparently for editors in their plush 8th Avenue skyscraper, the Wall Street Day of Rage is not among the news that the New York Times considers fit to print (emphasis on the word “print”…more on that aspect in a second). Instead, since as many as 2,000 demonstrators against Wall Street and government corruption first crowded into Manhattan’s Zuccotti Park on Saturday (the numbers have dwindled since then), the metro section of the Times has gone wild with the imminent closing of the orginal Ray’s Pizza as well as the looming disappearance of parking meters(maybe the Gray Lady is just selling nostalgic to newspapers’ graying audience?)

The Times isn’t unique, though. There don’t seem to have been any print articles in the Washington Post, either, and my sense is that television news coverage — even on “liberal” MSNBC — has been non-existent or less-than-minimal at best.

That’s not to say there hasn’t been some level of news coverage — including from the newsrooms of the New York Times. The Times has published three blog posts about the protests, although they were not easy to find on the web site (here and here— you had to navigate well below the layer of Ray’s Pizza) and the Washington Post has also published blog posts (here and here)
and even photo essays, which is good way of saying “look at these crazy and colorful kids” without addressing the actual issues. I’ve noticed that a lot of the American coverage that I found through Google News was in the form of online photo essays. Look, I’m somebody with one foot in the blogging world and the other foot still planted in the mentality of the old-fashioned newsroom, and I can tell you that sometimes buried blog posts and photo essays are a way to say you “covered” something without, you know, actually covering it, not in a way that counts.

Go back to the Tahrir Square analogy for a minute. Remember that as soon as the Egyptian protests heated up, though they may have not gotten much ink in state-kowtowing local media, they got a lot of coverage from news outlets in the United States, Europe, and elsewhere around the world. Wouldn’t it be really ironic if the Wall Street protest — while largely ignored here at home — was getting more in-depth coverage in foreign news organizations like the Guardian, the Daily Mail, and the International Business Times?

You could make the argument that the American media just doesn’t like covering protests. But then you’d be only half-right. News organizations haven’t spared many resources in tracking conservative Tea Party protests across America — even though the numbers of people attending those rallies have fallen off sharply in the last year. It’s just left-leaning protests that the media gets really queasy about covering, as evidenced by this bizarre case right here in Philadelphia involving the Inquirer’s reluctance to pay attention to protests at the home of Cigna’s CEO.

Here’s a perfect example collected in March by Think Progress:

While the tea party demonstrations — which were estimated to have been attended by 1,500 — 2,000 people according to Capitol Hill police officers — received an enormous amount of press coverage, a larger demonstration took place. A crowd estimated to be 2,500-strongby Capitol Hill police officers marched through the streets of Washington to mark the seventh anniversary of the war in Iraq and to call on Obama to end the wars in Iraq and Afghanistan and focus all of his efforts on domestic priorities like health care and education.

The news media did not ration. Using the media data-mining tool Critical Mention, a search by ThinkProgress of the keyword “protest” find the second, larger march to be as newsworthy as the tea party demonst of the three major cable news networks — CNN, MSNBC, and Fox — found that the tea party protests were covered 31 times between March 19th and March 21st, and the antiwar demonstration was only covered twice.

So what gives? Are the Koch Brothers or Lloyd Blankfein of Goildman Sachs using their secret red phones to call top editors and order a news blackout (or more appropriately in this case, a brownout)? Uh, not exactly. That said, if you don’t think a pervasive pro-Establishment, don’t-rock-the-boat bias exists in the modern American newsroom, then apparently you took a very, very long nap during the Iraq War and the run-up to the 2008 financial crisis. But there’s also other more subtle forces at work.

As we’ve discussed frankly here before, many reporters are somewhat liberal in their personal leanings — not leftist, not hardly, but somewhere on the center-left on matters like the environment or abortion. And since professional journalists are often obsessed with proving their “balance” above all else, and weak-kneed om reacting to right-wing criticism dating back to Spiro Agnew, that means bending over backwards to show they’re not ignoring something conservative like the Tea Party, even if they think actual Tea Partiers reside on some other planet. Meanwhile, as journalism reform guru Jay Rosen of NYU has discussed on many occasions, the other ultimate goal of the modern journalist is to appear “savvy.” And what could possibly be more embarrassingly unsavvy than taking seriously the ambitions of a band of granola-eating missed-the-60s dirty bleeping hippie wannabes — crazy enough to think that they can change the world.

And so actually changing the world is something that only happens halfway around the world, in places like Cairo.

Maybe some editors somewhere can put down their slice of Ray’s Pizza for a minute and think about the news brownout in lower Manhattan in the context of Tahrir Square, and what are the big-picture things that are really important in America in 2011. Like deep unrest over the wrong track this nation is headed down. Maybe one or two of those newsroom chiefs will be ashamed at how it’s played out so far, but I kind of doubt it.