May 5, 2011
By the Bradley Manning Support Network
Published at Couragetoresist.org 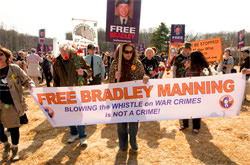 Hundreds of thousands of individuals globally celebrate today the confirmation that their efforts to end the torturous pre-trial confinement conditions inflicted upon US Army PFC Bradley Manning have been successful. Manning’s lead defense attorney, David E. Coombs of Rhode Island, has personally verified that Manning is indeed being held in Medium Custody confinement at the Joint Regional Corrections Facility (JRCF) at Fort Leavenworth, Kansas, as claimed by the Army last week.

“We won this battle because 600,000 individuals took the time to write letters and sign petitions, because thousands called the White House switchboard, because 300 of America’s top legal scholars decried Bradley’s pre-trial conditions as a clear violation of our Constitution’s 5th and 8th Amendments,” declared Jeff Paterson of Courage to Resist and the Bradley Manning Support Network. “We won this battle because over a hundred concerned citizens engaged in civil disobedience at the White House and at Quantico, and because our grassroots campaign shows no sign of slowing.”

These new conditions reflect a dramatic improvement for Manning following his transfer to Fort Leavenworth on April 20, 2011, after having suffered extreme solitary-like confinement at US Marine Corps Base Quantico, Virginia. During the nine months at Quantico, Manning was denied meaningful exercise, social interaction, sunlight, and was at times kept completely naked. These conditions were unique to Manning and were illegal under US military law as they clearly amounted to pre-trial punishment.

“I was able to tour the [Fort Leavenworth] facility and meet with PFC Manning last week. PFC Manning is now being held in Medium Custody. He is no longer under… harsh pretrial confinement conditions. Unlike at Quantico, PFC Manning’s cell has a large window that provides adequate natural light….PFC Manning is able to have all of his personal items in his cell, which include his clothing, his legal materials, books and letters from family and friends….Each pre-trial area (including PFC Manning’s) has four cells, and each pre-trial detainee is assigned to his own cell. The cells are connected to a shared common area, with a table, a treadmill, a television and a shower area….PFC Manning and his group are taken to the outdoor recreation area [for approximately two hours daily],” explained Coombs on his blog at www.armycourtmartialdefense.info hours ago.

“President Obama’s recent pronouncement that Bradley Manning ‘broke the law’ amounts to Unlawful Command Influence, something clearly prohibited because it’s devastating to the military justice system. Manning will eventually be judged by a jury of career military officers and noncommissioned officers. Will they be able to set aside the declaration of their commander in chief?” explains attorney Kevin Zeese, a member of the Bradley Manning Support Network. “Along with the illegal pre-trial punishment already inflicted upon Bradley, the government has more than enough legal basis to drop the prosecution. Instead, the death penalty or life in prison hangs over Manning’s head.” 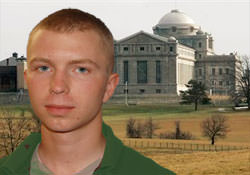 After nearly a year in confinement, the Army is expected to soon announce Manning’s first public hearing, an  Article 32 pre-trial proceeding, which will be held in the Washington DC area. Scores of international solidarity events are already being planned.

US Army intelligence analyst Private First Class Bradley E. Manning, 23-years-old, was arrested in Iraq on May 26, 2010. He still awaits his first public court hearing, now expected to begin in June 2011. Over 4,300 individuals have contributed over $333,000 towards PFC Manning’s legal fees and related public education efforts. The Bradley Manning Support Network is dedicated to thwarting the military’s attempts to hold a secret court martial, and to eventually winning the freedom of PFC Manning.