Home Resources Books Can a novel help educate the masses? 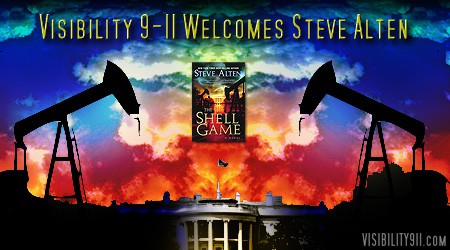 Steve Alten is a best selling author and gifted story teller and The Shell Game is Steve Alten at his best. Exciting and entertaining, and yet so informative, The Shell Game has the potential to bring 9-11 Truth to a much wider audience. Please consider purchasing your copy today at your local bookstore, online bookstore, or directly through The Shell Game website.

The Shell Game is “…a fictional thriller that deals with very real life and death issues that affect all of us. These include PEAK OIL (are  we running out?) and the events of 9/11 that led us into a war in Iraq. The plot of the book extrapolates from both of these issues (and others) in order to show the reader what a dangerous path the world has been placed upon.”

On Tuesday (1/22) bookstores across the U.S. released N.Y. Times best-selling author Steve Alten’s THE SHELL GAME, a fictional thriller that deals with the end of oil and the next 9/11…a false flag event designed to lead us into a war/chemical attack on Iran.

Can a novel help educate the masses that have avoided the message of 9/11 truth movements?

THE SHELL GAME
A Review By Carolyn Baker

Change is avalanching upon our heads, and most people are grotesquely unprepared to cope with it.
–Alvin Toffler

When Steve Alten sent me a review copy of The Shell Game, despite glowing reviews of it from people I know and respect, I sighed and squirmed in my chair. Anyone who knows me well knows that I don’t DO fiction-or to be more specific, I resist it because of the difficulty I usually experience with trying to organize the characters of a novel in my mind. Nevertheless, I emailed Steve and assured him that I would review the book and began skimming it with dread. Peeking into the pages with immense caution and aloofness, something completely astounding happened: I found myself inexplicably riveted. That someone like me could not put the book down speaks volumes, and no one was more surprised than I was.

As reviewer Bill Douglas points out, Shell Game opens from the perspective of the neocons “THEN, the novel proceeds to dis-assemble that ‘reality’ taking the reader on a journey that shows the ugly underbelly of false flag terrorism, diminishing civil and human rights, and the lies that led into past wars, and portend to lead us all into future wars.”

Early on in the book, we hear protagonist Ace Futrell, a petroleum geologist and former college football star, testifying before Congress regarding the precariousness of world oil supplies, his grim report engulfed and lost in a morass of political posturing by both parties. Futrell is married to Kelli Doyle, who had worked undercover for the CIA and the neocons, but is now gravely ill with terminal cancer. In her final days, Doyle is penning an expose entitled “To The Brink Of Hell: An Apology To The Survivors” in which she is disclosing the machinations of empire which are driving humanity to the collapse of civilization. The first sentence reads: “Frankly, I hope this scares the hell out of you.” In another portion of Doyle’s tell-all memoir she unleashes a litany of the lies of empire, noting that “All presidents lie.” Roosevelt, she says, lied about Pearl Harbor, Lyndon Johnson about Vietnam, Reagan about Iran-Contra, and Clinton about personal affairs in the Oval Office. Yet she emphasizes that:

“…it was the lies coming from the Bush-Cheney White House after the events of September 11, 2001 that led us to the invasion if Iraq and to a crossroads in western civilization that will affect you and your loved ones and a billion more innocent people.

But did we try to stop them?

Doyle’s subsequent revelations then echo the exhaustive research of Mike Ruppert in Crossing The Rubicon and the work of countless other 9/11 truth researchers, which explains the posting of the Bill Douglas review on 9/11 Blogger. In fact, Alten’s mesmerizing novel is already being embraced by many in the 9/11 Truth movement and is likely to take root in its fertile soil-possibly giving birth to a movie version of Shell Game which would be nothing less than a two-hour nail-biter.

Like any good story, The Shell Game is not linear but rather unfolds in a spiral of intrigue that culminates in a second 9/11-this time a nuclear one occurring in Los Angeles. But first and second 9/11’s are not the principal focus of Alten’s captivating novel. He has painstakingly clarified the corruption, greed, and power-driven madness that makes such catastrophes possible in the twenty-first century and intertwines these with the reality of a planet in the throes of unprecedented resource depletion. One is tempted to ask, “With all we actually know, how could this happen?” until Ace Futrell in Shell Game is rudely awakened by a conversation with Kelli’s cousin, Jennifer.

This fictional dialog could not be more timely than in the non-fiction election year of 2008, and Jennifer, a former campaign strategist trained under Karl Rove, enlightens Ace regarding the duplicity of the mainstream political process. Insisting that Jennifer explain why in the face of all of the evidence regarding climate change and energy depletion, Congress essentially takes no meaningful action, he asks:

So, despite all the evidence of climate changes, despite rising gas prices, despite air pollution and respiratory problems…despite the fact that the world is running out of oil and we’re ill prepared for what will happen next-nothing will change?

Not in Washington. Ace, it’s not about the problem, it’s all about the message. Most candidates’ policies run counter to their own voters’ interests. They get elected on sound bites and staying on message. Repeat the biggest lie often enough, and the public will accept it as truth. Give me enough money to blitz the media, and I could get Elmer Fudd elected, assuming he occasionally went to church and could lose the lisp….You begin with the message, something you can sell. Doesn’t matter if it’s true. Then you spend a million dollars in ads hammering it into the American psyche. (133-134)

In my opinion, The Shell Game was worth the read for this particular dialog alone between Ace and Jennifer of which I have quoted only a small portion. Without having access to a former campaign  strategist’s explanation as Ace has in the story, I grasped the same realities several years ago which is one of a plethora of reasons that I personally have no intention of ever again voting in a federal election in America-at least until the present political system has thoroughly collapsed.

The Shell Game’s value lies not only in underscoring the catastrophes toward which the human race is hurtling but in analyzing the mindset of empire that has made them inevitable. Alten’s novel feels eerily prescient and replete with tragic scenarios that now seem probable-perhaps unstoppable.

The book ends with the closing comments of Kelli Doyle’s memoir, simply: “Will we ever learn?”

I sit with that question, and as I do, another question comes: “How do we learn? What will it take for us to learn?”

NOW IS THE TIME TO ACT!

1. Call your local bookstore and make sure they have copies.

2. Buy as many as you can afford. Use them as gifts to convince loved ones about a truth they have, up until now, refused to see. These first editions are special. Special covers. Special looks. The second editions are already being printed.

3. Send an e-mail to everyone you know to BUY THE BOOK! We GUARANTEE they will love it!

4. Go to www.TheShellGame.net and grab the links to the two 90 second book trailer videos. POST THEM EVERYWHERE! Spread the word anyway you can. When you read the book, you’ll realize exactly what’s at stake.

WHY IS IT SO IMPORTANT TO DRIVE THIS BOOK TO THE TOP OF BEST-SELLER LISTS?

When a book appears on the NY Times best-seller list, a new mainstream machine kicks in! The books receive better front of store shelf space. More chains buy the book. Airport stores and grocery chains buy in. Talk shows like Letterman and Leno wait for a book to hit best-seller status before arranging interviews.

If the 9/11 movement can launch The SHELL GAME onto the list, the mainstream machine will carry it to a million readers who might otherwise NEVER research the truth. The success of THE SHELL GAME raises everyone’s boat.

Pre-season’s over! The clock is ticking!