Project Censored has delivered another timely and essential book. The passion and commitment of editors Prof. Mickey Huff and Dr. Andy Lee Roth definitely show—and not just in their own writing. They’re managed to tease out fine performances from many other writers, including Nafeez Mosaddeq Ahmed, Elliot D. Cohen of Truthout, Sara van Gelder of YES! Magazine, Peter Phillips, Adam Bessie and many others. 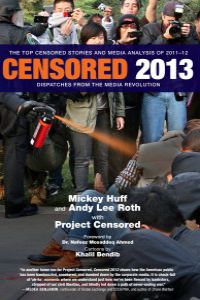 The issues definitely matter. The significance of the reader-selected Top 25 Censored Stories of 2011-12 is beyond dispute. Number 1 is “Signs of an Emerging Police State”; Number 2 is “Oceans in Peril”; and Number 3 is “Fukushima Disaster Worse Than Anticipated.” Other sections reveal how a “Federal Reserve Audit Reveals Trillions Loaned to Major Banks” and a “Small Network of Corporations Run the Global Economy.” For each general issue, News Clusters add context, breadth and depth.

Rumblings from the Occupy Movements of 2011 reverberate throughout many of the clusters. Readers learn not only about the “Bankster Bailout,” but about how to create an economy for the 99 percent. Lesser-known issues include how Congress has forced the US Post Office to bear unfair financial commitments, apparently in an effort to justify its privatization.

More than in previous Project Censored volumes, historical approaches inform this year’s edition. This trend is apparent in several places, including the follow-ups on the Top Stories from previous years. The book kicks into high gear when Mickey Huff and Andy Lee Roth sink their critical teeth into “junk food news,” “twinkies for the brain.” This includes the cult of celebrity, “whether through sports drama, Donald Trump’s ongoing obsession with Barack Obama’s birthplace, America’s infatuation with royalty”—decidedly “more McNews® than anyone should have to stomach.”

Among the examples provided, none seems more telling than how the royal wedding of William and Kate preempted coverage of the Stop Internet Piracy Act (SOPA), which could affect nearly everyone in the country (pp. 152-55, 159, 164). Project Censored has long pointed out how distraction functions as a subtle form of censorship. Beyond the steady diet of escapist entertainment served up by corporate media, the editors flash back to Daniel Boorstin’s now classic The Image (1962) to illustrate the American tradition of “pseudo events,” which include political debates largely devoid of substance. The 2012 presidential debates hyped by the American mass media surely provide cases in point. Not once did the network moderators ask questions about issues such as burgeoning drone attacks, increased government surveillance, or global climate change.

The analysis of censorship and propaganda techniques deepens in “Censorship Backfires,” an outstanding chapter by Dutch scholar Dr. Antoon De Baets. As the author of Responsible History, De Baets is well positioned to expose the common malpractice of self-censorship among historians. This often takes the form of refusing to shine a light into dark corners or even “systematic manipulation of historical facts,” typically propelled by rewards from academe, foundations, or government. Over time, tacit historical taboos (or “memory holes”) are enforced, especially when the subjects may be “embarrassing for reason of privacy, reputation, or legitimization of power and status.” The contradictions in the official account of 9/11 provide one notable case in point. The “backfire,” notes De Baets, comes when the “blank spots” in the record “provoke a stronger and almost obsessive interest in these issues” (pp. 225-32).

Closing out the analysis of censorship are Dr. Elliott D. Cohen’s unsettling revelations, “The Information War: How Government Is Seeking Total Information Awareness.” Dr. Cohen points to a war waged for “the acquisition and control of the rich supply of information” . . . a “vigilant campaign by government, across borders, to ensure that no one has the franchise of knowledge except the highest echelons of national command and control.” The war for privacy may not be lost, he tells us, but we’ll need to fight for what remains. Recent disclosures about extensive FBI snooping into the personnel email of David Petraeus and Paula Broadwell surely underscore this point; yet this sinister development got lost beneath the titillating coverage of a sex scandal.

Moving to particular cases, readers also learn how de facto censorship occurs when alternative media outlets are run badly. Especially engaging to listeners of independent, listener-sponsored Pacifica Radio are the disclosures by Andrew Leslie Phillips, the Acting Manager of KPFA in Berkeley, California. Phillips sketches an unfortunate history of attempts to make the Pacifica network into a more liberal National Public Radio, dulling its critical edge and ultimately threatening its existence. One result, he reveals, is an “unwieldy and expensive governance structure” at the network level characterized by cronyism among “political diehards with little radio experience who have not done much to improve programming, revenue, or audience membership” (pp. 262-63).

One of most substantive of these is “The Global 1 Percent Ruling Class Exposed” by Dr. Peter Phillips and Kimberly Soeiro of Sonoma State University. This chapter doesn’t talk about the 1% in the abstract, however; it names names. In the mining industry, the lens focuses on the pin stripers who run Freeport McRan; in the investment sector, it probes the board of Blackrock, Inc. The reader sees the ruling class sitting on these interlocked boards of directors as its members “arrange for payments to government officials, undermine labor organizations, manipulate the price of commodities (e.g. gold), or engage in insider trading . . . .” (pp. 251-52).

All this occurs, Roth argues, because corporate media are prone to demonize Islamist leaders and to suppress the CIA drone attacks that target them. Roth’s article certainly makes a strong indictment of these violations of constitutional guarantees. The case would be even stronger if it mentioned that just two weeks later another US citizen, the Imam’s 16-year-old son Abdulrahman al-Aulaqi, was also killed by a CIA-sponsored drone strike. This time, not only was there no legal process but there were no credible allegations of involvement with terrorism. A Hellfire missile just blew the kid away (http://www.huffingtonpost.com/2012/10/24/robert-gibbs-anwar- al-awlaki_n_2012438.html).

Another excellent chapter takes a tough look at “GERM Warfare: How to Reclaim the Education Debate from Corporate Occupation.” Adam Bessie, a former public school teacher now an English professor, again combines passionate commitment with significant expertise. Prof. Bessie shows how the current privatization-of-the-public-schools movement, its roots in the toxic substrate of Milton Friedman’s laissez faire economics, has now borne toxic fruit in “reformers” like Michelle Rhee, the former anti-faculty administrator. Bessie shows how Rhee’s Students First, while presenting itself in progressive-sounding language, is really about teachers last. As most of us realize, when teachers are beaten down, students are less likely to rise.

Brian Covert, a journalist and researcher living in Japan, explains why the nuclear industry became so problematic. His “On the Road to Fukushima” focuses on the huge media-watchdog failures, especially those emerging from Matsutaro Shoriki, a pro-capitalist, highly nationalistic newspaper magnate who beat the war drums for Imperial conquest. Though Shoriki was briefly imprisoned after the War, he was soon freed and brought back to prominence by the Americans under Gen. Douglas MacArthur.

Following World War II, then, Shoriki regained his stature as a media baron and used his influence to import the American “Atoms for Peace” program into Japan. Since Japan had just been shattered by the first atomic bombs, this presented a real propaganda challenge. To help surmount it, Shoriki used his cozy connections with journalists to insure that issues of nuclear safety were air brushed out of the picture, thereby helping to institutionalize “the toothless lapdog press of today.” The health consequences for the Japanese population and the ecological fallout for the Pacific Ocean will likely be grave.

This government/industry/press collusion became horrifically evident in the immediate aftermath of the Fukushima disaster, when Tokyo Electric (TEPCO) and the government were able to suppress public awareness and grossly underestimate the dangers to both public health and the environment. The book’s editors clearly understand the connection, for the pollution from Fukushima is linked to the Great Pacific Garbage Patch, a vast glob of debris, mostly plastics, coagulated by currents swirling in the Pacific.

A Stunning Update on the Kent State Killings

If much of this history was new to most American readers, so was Mickey Huff and Laurel Krause’s truth-telling about the Kent State shootings on May 4, 1970. While the controlled indignation evokes Neil Young’s famous “Four Dead in Ohio,” the impressive research and writing delivers a hard- hitting exposé.

Making use of groundbreaking new evidence, notably a fresh forensic analysis of an audiotape, the authors explode the conventional narrative about Kent State. No longer can government apologists claim that “rioters” burned down the ROTC Building, that no order to fire was ever given, that national guardsmen acted only in self-defense, or that only a few shots were fired. Instead, any accurate narrative must now include the fact that activist groups at Kent State, like those on many campuses opposing the Vietnam War, had been infiltrated by FBI COINTELPRO (“counter intelligence,” actually sabotage from within) and the Department of Defense was deeply implicated in gunning down college students.

Since the National Guardsmen were armed with armor-piercing bullets, the killings must ultimately be seen as a State Crime Against Democracy (SCAD), a deliberate attack on citizens exercising their right to protest— intended, it would surely seem, to intimidate other demonstrators.

Looking Toward the Future: A Positive Vision

Given the range of problem issues presented by Censored 2013, readers might need affirmations about how to proceed toward solutions. This is exactly what Prof. Kenn Burrows and Dr. Michael Nagler offer in “The Creative Tension of the Emerging Future.” As forward-looking thinkers, Burrows and Nagler invite readers into “a deeper conversation about our collective dilemma.” These include moving toward an economy whose purpose is the satisfaction of human needs, not promotion of consumer wants. Such an economy would involve gifting, sharing, and barter as well as worker-owned cooperatives to replace the standard capitalist model (pp. 315, 322).

Burrows and Nagler also emphasize community banking and state banks. While credit unions are increasingly popular, many progressives do not realize how much state banks offer, especially in terms of job creation. The authors point out that North Dakota, the only state with its own public bank, has experienced the lowest unemployment rate in the country. One reason, they rightly note, is that while corporate banks, obsessed with high returns, have remained reluctant to make loans, a state bank has served the small businesses that create local jobs.

Yes, the problems are many and varied, as this new Project Censored volume makes clear. And yes, solutions are possible—but first we must understand what we’re up against. That’s what Censored 2013 delivers so remarkably well.