Concerning the graduated repression of the Nazi regime, the Reverend Martin Niemoller, in 1945, stated, to the effect:

Though this quote has taken on many forms and endured several disputes, the ultimate interpretation stands. That silence about liberty infractions equals civil death.

Further, on the notion of leading the public headstrong into oblivion, the Nazis said it best:

“Naturally the common people don’t want war; neither in Russia , nor in England, nor in America, nor in Germany . That is understood. But after all, it is the leaders of the country who determine policy, and it is always a simple matter to drag the people along, whether it is a democracy, or a fascist dictatorship, or a parliament, or a communist dictatorship. Voice or no voice, the people can always be brought to the bidding of the leaders. That is easy. All you have to do is to tell them they are being attacked, and denounce the pacifists for lack of patriotism and exposing the country to danger. It works the same in any country.” Hermann Goering, 1946

Thus describes in many ways America today. From 9/11 to the non-sequitor of Iraq we’ve witnessed the success of establishment deceit, from violations of international law to constitutional abrogation. Not just in foreign affairs, but in domestic terms.

This is a controversial issue, but, it’s a very important one that threads past to present. The following is a civic exercise and rough draft of thoughts to come…updates soon on the horizon. Until then… 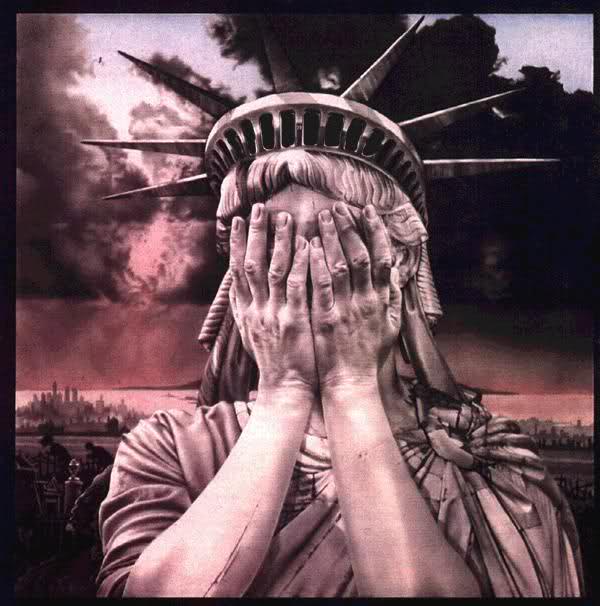 Recently, the House of Representatives passed H.R. 1955, Violent Radicalization and Homegrown Terrorism Prevention Act of 2007, by a staggering vote of 404 to 6. In hearings for the bill, testimony focused on political and peace activist groups in the U.S. and linked them with extremist groups abroad and claimed the two were the same in terms of a threat to Americans. This is the same tactic used dating back to the 19th century in America, so it is nothing new. But is it commensurate with American values ensconced in the Bill of Rights and Declaration of Independence?

The use of propaganda to disinform the public and instill fear in the American population, especially to lead to war has been well established (Spanish-American War, WWI, WWII,Viet Nam and the Gulf of Tonkin, and most recently 9/11, WMD ‘s and Iraq to name a few). It was also commonplace for Congress to pass laws restricting the rights of citizens in the name of freedom and security. Remember the Espionage and Sedition Acts from WWI used to suppress criticism of government? The A. Mitchell Palmer Raids and the Red Scare after WWI? The internment camps in WWII for the Japanese? Senator Joseph McCarthy during the 1950’s and his Communist witch hunts based on false figures and conjecture? COINTELPRO during the Cold War and Viet Nam, all used to clamp down on free speech and assembly rights while the F.B.I. infiltrated peace groups as agent provocateurs and tried to force violence to discredit the antiwar movement and civil rights leaders? All this in the land of the free and home of the brave.

After 9/11 we had the USA PATRIOT Act, the suspension of Habeas Corpus, indefinite detentions, extraordinary rendition, flouting of international law, torture, and enemy combatants with no legal counsel held in off shore military prisons. Now, continuing the trend of rolling back founding principles and stifling debate and dissent, the Congress strikes again. This is a bipartisan measure, so it is not merely a one party issue. The outcry to this recent bill, while just beginning, is also very diverse consisting of veterans, NRA folks on the right as well as many civil libertarians and other veterans on the left. In fact, many groups opposing the USA PATRIOT Act have chimed in already. Read on…

Chief among the claims of those testifying to Congress about the “need” for this bill, which included groups with close ties to government and military industrial complex over the years like the Rand Corporation, was that anyone that questions the official government line on 9/11 is akin to a terrorist or material supporter to terrorism. One speaker, Mark Weitzman of the Wiesenthal Center (ironically founded by Holocaust survivor Simon Wiesenthal to educate the public about war crimes), claimed that architects, engineers, and scientists that questions the official 9/11 narrative are the same as alleged violent Jihadist groups. This is the latest round of official conflation between terrorists and activists in the U.S. recently examined through the USA PATRIOT Act by Nancy Chang in her work “Silencing Political Dissent” at the Center for Constitutional Rights in New York. Is there a link between these aforementioned groups? No, there is not. But that didn’t stop these folks from simply saying so on the public record while providing no evidence. And Jane Harmon, co-sponsor of the bill, a Democrat from southern CA., didn’t ask for any. Just like McCarthy. See the C-Span Video Footage for more details and context.

Given the government’s own admission in several separate studies that they have not concluded how the WTC and towers Building 7 were destroyed, that the official commission report was widely censored by Bush loyalists, and that the F.B.I. dropped it’s quest for Bin Laden due to lack of evidence (and the CIA disbanded the unit in charge of looking for him), over a third of Americans when polled still question what happened that day and who was responsible. Even NIST officials conducting the most thorough official investigation into Building 7 in New York claimed their work was flawed and hampered by significant restrictions.

While this in no way implicates any particular parties for the events of 9/11, it does lead reasonable people that have researched the facts to conclude a new investigation is needed and many questions have not been answered. The families of the victims of 9/11 submitted hundreds of questions to the commission, 3/4 of them went ignored or unanswered. We as Americans deserve better. Now these people are being potentially criminalized for their questions and nonviolent actions. Also, more personally, I teach a critical thinking course on 9/11. According to the language in the bill, I could be sent to prison for asking people to think for themselves based on factual evidence. In America, do you think this is appropriate action by government?

Regardless if one believes the counter arguments about 9/11 in America’s recent past, should these people be criminalized for questioning the government and asking for another inquiry into that fateful day? Review materials below, then opine supported by evidence as to what you think about this current situation. This is a civic exercise. Do we really live in a republic, a society based on principles of liberty? If so, we need to examine all of this.

The video on C-Span (see after 39 minutes for specifics) of some supporters:

One of the sites shown alongside terror groups in a guilt by association tactic, this one founded by a Bay Area Republican and 20 year architect, Richard Gage:

Discourse and widespread awareness through education is one way to address these key issues. Possible discussion prompts with friends, family, and the general public:

Remember, this can be a civic exercise. That’s what counts. Watch the video, read the texts, see the reactions and consider the following: Is it commensurate with American values ensconced in the Bill of Rights and Declaration of Independence? Should people be criminalized for questioning the government and asking for another inquiry into 9/11 related issues? Why or why not? Are nonviolent groups that question the government on 9/11 issues the same threat as alleged Jihadist groups? How do you see this as part of a trend of repression of dissident voices in America? Explain and support. Talk to your family, your friends, strangers, your foes. Give it a go! The survival of our republic depends upon it. This is up to us, the people!

A final word from Benjamin Franklin:

“Those who would give up Essential Liberty to purchase a little Temporary Safety, deserve neither Liberty nor Safety.”

Where do you stand at this crucial juncture in American history?