“Architects, Engineers & Scientists Examine the Evidence of 9/11”, held February 23rd at Immanuel Presbyterian Church in Los Angeles, featured Cynthia McKinney, Richard Gage, and Steven Jones. Following is a two-part video of Cynthia’s presentation (click Read More for part 2); more will be posted here as we receive it from event organizers. 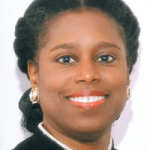 A great event came together very well Saturday evening, 23 Feb 2008, under the able leadership of Julia and Kristine (sp?) of KPFK – LA. Julia provided introductions followed by Richard Gage for about 35 minutes, then I spoke for about an hour, followed by Richard once more… Then Cynthia McKinney gave a powerful, motivating talk — she is running for US President in the Green Party (USA). She is very 9/11-savvy. Finally, Q&A. It was fun — a lot of energy at the meeting.

I presented new SEM/EDS data on the red/gray chips — and explained further research that is being planned and done to finish this up. (Hopefully the video will be available soon.) I also spoke about areas where I/we actually agree with NIST scientists and engineers, e.g.,

1. The “pancake theory of collapse” — has been analyzed and dismissed by NIST in their reports. For example, in an FAQ released by NIST in Aug 2006, they write:

“NIST’s findings do not support the “pancake theory” of collapse, which is premised on a progressive failure of the floor systems in the WTC towers.” wtc.nist.gov/pubs/factsheets/faqs_8_2006.htm

2. NIST rejected the false idea that the Towers were “hollow tubes” with the weight of the floors supported only by the perimeter columns.

Quoting again from NIST:
NIST: “The core columns were designed to support approximately 50% of the gravity loads.” [NIST, 2005] “The hat-truss tied the core to the perimeter walls of the towers, and thus allowed the building to withstand the effects of the aircraft impact and subsequent fires for a much longer time–enabling large numbers of building occupants to evacuate safely.” [Sunder, 2006]
“The core of the building, which carried primarily gravity loads, was made up of a mixture of massive box columns made from three-story long plates, and heavy rolled wide-flange shapes.” [JoM, 2007]

4. NIST: “This letter is in response to your April 12, 2007 request for correction… we are unable to provide a full explanation of the total collapse.” (Letter from NIST to us, pub’d in the Journal of 9/11 Studies.)
Shows remarkable and commendable candor!

I urged NIST to “open the door” and actually LOOK for residues of explosives/cutter charges (especially nano-thermite) — as we have done.

I think there is an opportunity here — Congress charged NIST to determine “why and how” the Towers AND WTC 7 collapsed. If NIST and Congress will just do their jobs — and we stand ready to help! (See, e.g., Journalof911Studies.com.) At the same time, we’re not holding our breaths — our independent investigation of the causes of the WTC destructions is proceeding quite well (thank you!).

There is more, of course. (For example, I made brief mention of “Speculating Hecklers” and while I was thinking of certain posters at JREF in particular when I did that slide, I did not mention any names… just a warning about such types.)

A sad added note: I have looked very much forward to going to the 9/11 Conferences in Australia in a few weeks, but my wife’s back and leg condition following a car accident some time ago has significantly worsened lately and it is unlikely that we (or I) will go to Australia. Medical advice is that she take it very easy on her leg and back for a while (at least). However, I told the organizers (great group of people) that I will prepare a video that will take attendees into our laboratories where we do studies on the WTC dust (etc.). I expect a very successful conference in Australia.