Home Activism Creating a New Path to Peace and Prosperity — May 19, Oakland 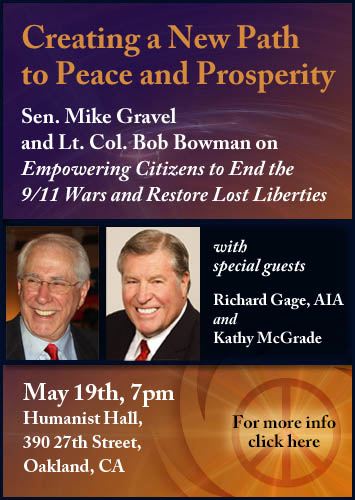 Peter Phillips will be our MC and first speaker. Professor of Sociology at
Sonoma State University and former Director of Project Censored, Peter currently
co-hosts The Morning Show on KPFA and is President of The Media Freedom Foundation.

Richard Gage, AIA, is well known to many in the Bay Area. He is the dynamic
founder of Architects and Engineers for 9/11 Truth, which has grown to 1500
petition signing professionals. He will update us on the many recent activities
of AE911Truth.

Introducing Kathy McGrade, a Silicon Valley engineer now affiliated with AE911Truth.
Her work includes ensuring the safety of firefighters during structural fires.
She presents a sharp critique of the government’s account for the demise of
the three WTC Towers.

As part of his long and distinguished career, Bob Bowman ran for President
in 2000 and for the US Congress in 2006. Bob Scheer of the LA Times called him
“probably the best public speaker in the country today.” Dr. Bowman
will give new voice to several of his recurrent themes–no more imperial presidency,
no more undeclared corporate wars, no more spying on the American people, no
more repression of dissidents, no more exporting of jobs, no more government
lies, false-flag attacks, and cover-ups.

Two-term Senator from Alaska Mike Gravel first gained national attention when
he read the Pentagon Papers into the Congressional Record. For the last two
decades, he has worked to establish a National Initiative process to empower
citizens. Mike ran for president in 2008, and more recently is leading efforts
for a series of state initiatives calling for a new, independent investigation
of 9/11.