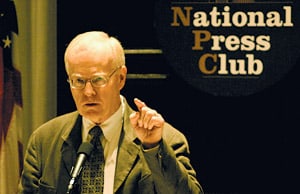 David Ray Griffin is a professor of philosophy of religion and theology and a proponent of 9/11 conspiracy theories that implicate members of the US government in the attacks. His just-released book is Debunking 9/11 Debunking: An Answer to Popular Mechanics and Other Defenders of the Official Conspiracy Theory (Interlink Publishing). Griffin’s 9/11 books include The New Pearl Harbor (2003) and The 9/11 Commission Report: Omissions and Distortions (2004).

Griffin, whose bottom line is the ecological crisis, believes the 911-spawned “War on Terror” is keeping ecology on the back burner. Along with Griffin, hundreds of scholars, pilots, veterans, first responders and CIA, government and military officials, had, by May 2006, convinced a polled 42 percent of Americans that a new independent 9/11 investigation was needed. (See www.patriotsquestion911.com)

Disturbed by the poll, in August of 2006, proponents of the official theory launched a four-pronged attack on the evidence that wouldn’t go away. They overhauled the official theory with revisions presented through a NIST (National Institutes of Standards and Technology) factsheet with information from Without Precedent, written by 9/11 commissioners Kean and Hamilton and material from Popular Mechanics’ Debunking 9/11 Myths, endorsed by Condoleezza Rice.

To buttress these revisions, the government handed previously unreleased NORAD tapes to Vanity Fair‘s Michael Bronner, whose 9/11 Live: The NORAD Tapes claims, astonishingly, that the military originally lied to the 9/11 Commission, withholding the fact that they had not known about the hijacked airlines until after they had crashed. The FAA had not bothered to tell them. Counters Griffin: “Is not this portrayal rendered especially unbelievable by the lack of reports that any FAA employees at Boston, Herndon or Washington were fired or even reprimanded for dereliction of duty?”

Griffin tracks the official account’s misadventures as it defensively shifts blame for preposterous feats of incompetence from NORAD, to the FAA, to the fighter pilots. Griffin systematically invalidates the logical fallacies — evidence suppression, circular reasoning, special pleading and unsupported claims — of the evolving official story.
Take the identity of the highjacker of flight 93, which was supposedly buried after nosing into the ground at 580 miles per hour: “So we are supposed to believe that although Jarrah’s body, being in the cockpit, was thrust dozens of feet into the ground, his passport, presumably in his pocket, flew out of the cockpit when the plane’s nose impacted the ground and landed intact on the surface.”

Griffin details how NIST “tweaked the data” for its computer simulation model until it matched its hypothesis that fire had melted the steel, causing the “progressive collapse” of the Twin Towers. The revealing steel beams had been swiftly whisked away on flatbed trucks. A congressional science committee complained that the “… lack of authority of investigators to impound pieces of steel for examination before they were recycled led to the loss of important pieces of evidence.”

Griffin notes, “The burden of proof should be placed on any claim that WTC 7 was brought down by something other than explosives, because this is the wild, empirically-baseless hypothesis devoid of historical precedent.” And though Pentagon flight 77 was supposedly “… vaporized… this claim was wildly incompatible with the assertion that the bodies of the plane’s occupants were later identified by their DNA.” The plane’s hitting the Pentagon was “… like taking a Coke can and smashing it against the wall. The back and the front become one… but smashing a Coke can does not reduce its weight. So why has no one reported finding a 100,000-pound piece of steel and aluminum in the wreckage?”

Point by point, Griffin’s multi-faceted evidence converges on the conclusion that 9/11 was a false flag operation by vested interests seeking public consent to occupy the Middle East. If worldwide calls for an impartial investigation succeed, Griffin’s reference works will help guide the investigators through the growing maze of lies and cover-ups to an understanding of what actually happened that day. The resulting truth could well relieve the world of the fear, hatred and ugliness the event has spawned.