Home Case for Complicity Air Defense Failures Dick Cheney Only Had to Delay Things a COUPLE OF MINUTES to...

When you read behind it, it’s almost as if he’s wishing that this country would be attacked again, in order to make his point.

News commentator Ed Schultz said today that Cheney is wishing for a terrorist attack on the U.S.

What should we make of all this?

Well, everyone knows that Cheney is ruthless:

Cheney is also the guy who :

Blast from the Past 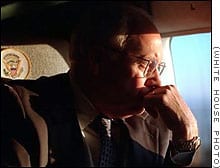 Okay, Cheney is a bad apple. But that’s not all.

Remember that Cheney falsely claimed that there was a link between 9/11 and Iraq, but has recently admitted there was never any evidence to back up such a claim.

Remember also that the torture program which Cheney created was specifically aimed at producing false confessions in an attempt to link Iraq and 9/11 .

For his entire career, he sought untrammeled power. The Bush presidency and 9/11 finally gave it to him . . . .

Indeed, as I’ve previously pointed out :

So Cheney had a lot of motivation to “accidentally” let 9/11 happen.

Cheney also knew 9/11 was going to happen. The government knew that terrorists could use planes as weapons — and had even run its own drills of planes being used as weapons against the World Trade Center and other U.S. high-profile buildings, using REAL airplanes — all before 9/11 . Indeed, the government heard the 9/11 plans from the hijackers’ own mouths before 9/11 .

Indeed, Cheney was in charge of all counter-terrorism exercises, activities and responses on 9/11 (see this Department of State announcement ; this CNN article ; and this essay ). So he was in a perfect position to “accidentally” let it happen.

He Only Had to Wait a Couple of Minutes

Before you say “that’s a crazy conspiracy theory”, please note that Cheney would have only had to delay normal military response a couple of minutes to let the 9/11 attacks succeed.

Specifically, the Secretary of Transportation testified to the 9/11 Commission:

This testimony is confirmed here:

A retired 27-year CIA analyst who prepared and presented Presidential Daily Briefs and served as a high-level analyst for several presidents stated that the Pentagon is a heavily-defended building, with defensive weapons on the roof . This matches a Pentagon employee’s statement that she was told “you are now standing in one of the most secure building in all of the United States” .

And a former air traffic controller, who knows the flight corridor which the two planes which hit the Twin Towers flew “like the back of my hand”, and who handled two actual hijackings, says that planes can be tracked on radar even when their transponders are turned off, and that Donald Rumsfeld and the Pentagon tracked three of the four flights from the point of their hijacking to hitting their targets (also, listen to this interview ).

Moreover, this diagram shows that the hijacked planes flew over numerous military bases on 9/11 before crashing . See also this essay regarding the stand down of the military ; and see this war game proposal created before 9/11 revolving around Bin Laden and including “live-fly exercises” involving real planes , later confirmed by this official Department of Defense website . And remember that, according to CBS news , radar shows Flight 77 did a downward spiral, turning almost a complete circle and dropping the last 7,000 feet in two-and-a-half minutes.

All Cheney had to do was delay normal defensive procedures a couple of minutes to let the plane slam into the Pentagon. It was obvious by that time that the 9/11 attacks were not random instances of “pilot error”. Cheney – in charge of counter-terrorism on 9/11 – simply had to watch the plane approach from many miles away and yell at everyone that “the orders still stand” to let the attacks succeed.

By just delaying for a few minutes , Cheney’s long-dreamed Iraq and Afghanistan wars, imperial ambitions as described by the Project for a New American Century, and increase of powers domestically would all be justified.

Given Cheney’s masterminding of a torture program to produce false information about 9/11, fake intelligence regarding WMDs to justify the Iraq war, centralization of power in the executive branch, assassinations and other hanky panky, and the rest of Cheney’s biography, do you really think he couldn’t delay things a couple of minutes to reach all of this goals?

Postscript: The 9/11 Commissioners themselves now doubt the “official” 9/11 story:

Crossing the Rubicon: Simplifying the Case Against Dick Cheney