On Nov. 28, 1953, Frank Olson, a bland, seemingly innocuous 42-year-old government scientist, plunged to his death from room 1018A in New York’s Statler Hotel, landing on a Seventh Avenue sidewalk just opposite Penn Station.

Olson’s ignominious end was written off as an unremarkable suicide of a depressed government bureaucrat who came to New York City seeking psychiatric treatment, so it attracted scant attention at the time.

But 22 years later, the Rockefeller Commission report was released, detailing a litany of domestic abuses committed by the CIA. The ugly truth emerged: Olson’s death was the result of his having been surreptitiously dosed with LSD days earlier by his colleagues.

The shocking disclosure led to President Gerald Ford’s apology to Olson’s widow and his three children, who accepted a $750,000 civil payment for his wrongful death.

But the belated 1975 mea culpa failed to close a tawdry chapter of our nation’s past. Instead it generated more interest into a series of wildly implausible “mind control” experiments on an unsuspecting populace over three decades.

Much of this plot unfolded here, in New York, according to H.P. Albarelli Jr., author of “A Terrible Mistake: The Murder of Frank Olson and the CIA’s Secret Cold War Experiments.”

“For me, in countless ways the Olson story is a New York City story,” said Albarelli, a former lawyer in the Carter White House, who has written extensively about biological warfare and intelligence matters. “The CIA itself was created and initially composed of wealthy men who came from Wall Street and New York City law firms.”

Olson was a research scientist assigned to the CIA’s Special Operations Division, at Ft. Detrick, Md., who was performing top secret research relating to LSD-25, a powerful new drug whose properties were barely understood. Could psychedelic drugs be used to get enemy combatants to lay down their arms, or work as a truth serum on reluctant prisoners?

Albarelli spent more than a decade sifting through more than 100,000 pages of government documents and his most startling chestnut might be his claim that the intelligence community conducted aerosol tests of LSD inside the New York City subway system.

“The experiment was pretty shocking — shocking that the CIA and the Army would release LSD like that, among innocent unwitting folks,” Albarelli told The Post.

A declassified FBI report from the Baltimore field office dated Aug. 25, 1950 provides some tantalizing support for the claim. “The BW [biological weapon] experiments to be conducted by representatives of the Department of the Army in the New York Subway System in September 1950, have been indefinitely postponed,” states the memo, a copy of which the author provided to The Post

An Olson colleague, Dr. Henry Eigelsbach, confirmed to Albarelli that the LSD subway test did, in fact, occur in November 1950, albeit on a smaller scale than first planned. Little, however, is known about the test — what line, how many people and what happened.

The purported experiment occurred nearly a year before a more infamous August 1951 incident in the small town of Pont St. Esprit, in the south of France, when the citizens were hit by a case of mass insanity.

Over a two-day period, some 250 residents sought hospital care after hallucinating for no apparent reason. Thirty-two patients were hauled off to mental asylums. Four died. Mercury poisoning or ergot, a fungus of rye bread, was cited as the culprit. But ergot is also one of the central ingredient of LSD. And curiously enough, Olson and his government pals were in France when the craziness erupted.

Albarelli also introduces us to George Hunter White — a ne’er-do-well agent for the Bureau of Narcotics, a forerunner to the current Drug Enforcement Administration, he was on “special contract” with the CIA.

It was White, Olson’s colleague Eigelsbach contends, who was behind the November 1950 New York City subway test — as well as a second test two years later, Albarelli claims.

“George White in 1952 did release a small amount of aerosol LSD in a subway car. He was pleased with the results as indicated in his diary, but his reports on the incident were destroyed by the CIA in 1973,” he says.

But with the CIA’s most important records on such matters destroyed or cloaked in national security claims, it remains difficult to prove whether these purported subway tests occurred.

Still, Albarelli’s portrait of White — a gruff, chain-smoking, gin-swilling reprobate with an occasional fondness for opium, hookers and Mafiosi drug-dealers — makes it apparent that if anyone could have tested LSD on an unsuspecting public, it would be him.

White had set up a CIA safe house at 81 Bedford Street, in Greenwich Village, comprised of two apartments conjoined with a hidden two-way mirror and doorway. Posing as a seaman or artist, he would regularly recruit strangers for social gatherings there, where they would be plied with psychedelic drugs, often without their knowledge. The aim was to see if White could successfully extract information from them and to assess those results, according to one CIA document.

In between home experimenting, White was well known as a carouser. The safe house was down the block from Chumley’s, a former speakeasy and now defunct bar, where White once took James Jesus Angleton, the former CIA head.

The good news for people of New York, was when they stumbled out of Chumley’s, it was a short walk home — and they didn’t need to ride the subway to get there.

CIA Requests its Own Documents from Author
December 16, 2009
PRWeb

In a bizarre about-face, the secretive Central Intelligence Agency has requested documents from an investigative journalist, even though the writer had earlier obtained them from the CIA itself under the Freedom of Information Act.

Walterville (Vocus/PRWEB ) December 16, 2009 — In a bizarre about-face, the secretive Central Intelligence Agency has requested documents from an investigative journalist, even though the writer had earlier obtained them from the CIA itself under the Freedom of Information Act.

The strange request was made last week to author H.P. Albarelli Jr., whose recently published book A Terrible Mistake: The Murder of Frank Olson and the CIA’s Secret Cold War Experiments, details a myriad of CIA drug experiments and exposes a large number of previously anonymous physicians and business officials who contracted with the agency. The experiments resulted in the deaths of a number of people and sent hundreds more seeking medical help.

“The caller, an agency official, who identified himself by a name I was quite familiar with from past requests,” explained Albarelli, “asked if I would be so kind as to send by fax two documents my book referenced in its narrative and footnotes. I suppose I should have been bowled over by the request, but I wasn’t. It happened once before.”

“The crazy thing,” added Albarelli, “is that all of the requested documents came from my FOI requests to the agency in the early 1990s.”

The documents requested from Albarelli centered on two subjects. The first top-secret CIA document details a meeting between an official of the Sandoz Chemical Company and an undercover CIA operator. The document reveals a close relationship between the firm and the agency, and provides stunning details about a mysterious 1951 outbreak of “insanity” in a small French town, Pont St. Esprit. In a covert experiment, the village was surreptitiously administered the powerful hallucinogen LSD in an attempt to see if there was a viable method of waging war without killing people or destroying property. A related document appears to reveal that famed LSD inventor, Albert Hoffmann, maintained a close relationship with the CIA. 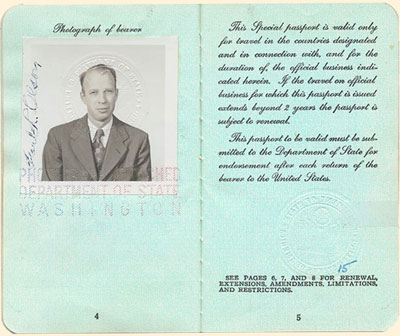 The strange request was made last week to author H.P. Albarelli Jr., whose recently published book A Terrible Mistake: The Murder of Frank Olson and the CIA’s Secret Cold War Experiments, details a myriad of CIA drug experiments… The second document requested reveals intelligence links between one of the criminals who murdered Frank Olson and the assassination of JFK, including a possible working relationship with suspected assassin Lee Harvey Oswald. About seven years ago, after an Internet article by Albarelli, an agency official requested that Albarelli send the CIA a copy of a top-secret report from the CIA’s Robert Lashbrook to Dr. Sidney Gottlieb, director of its Chemical Division. The document concerned a Pentagon and CIA cover-up of the 1953 death of a patient at the New York Psychiatric Institute. That patient, Harold Blauer, was killed by an injection of drugs administered under a covert CIA contract.

A Terrible Mistake is published by TrineDay, an Oregon-based company that specializes in books that are shunned by mainstream publishers due to their controversial nature.

H.P. Albarelli Jr. has written a number of groundbreaking newspaper, magazine and Internet articles, including several on the Olson case, as well as topics such as anthrax, Cuba, child abuse and intelligence matters. His novel The Heap was published in 2005. More information on A Terrible Mistake can be found at: www.aterriblemistake.com.