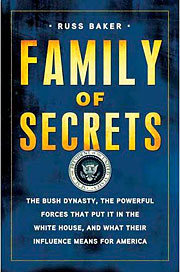 Russ Baker discusses his book, Family of Secrets, the first complete historic portrait of the Bush dynasty, and provides us with an overview of how this dynasty shaped our politics. He tells us about the shadow government in the US, the real players, elites, and power centers within each president’s government, and the limitation on what and how much an American president can accomplish — considering the influence of these powerful and independent fiefdoms characterized by entrenched agendas and constant intrigue. Mr. Baker defines and explains the concept of Forensic Journalism, and talks about his nonprofit news organization WhoWhatWhy, the need for nonpartisan and independent journalism today, the current media landscape in the US, and more.

Russ Baker is an award-winning investigative journalist and the author of Family of Secrets — the Bush Dynasty, America’s Invisible Government, and the Hidden History of the Last Fifty Years. He has written for The New Yorker, Vanity Fair, The Nation, The New York Times, The Washington Post, the Village Voice and Esquire. He has served as a contributing editor to the Columbia Journalism Review, and is the founder of WhoWhatWhy, a nonpartisan, nonprofit investigative news organization.