Several impressive developments over the last 18 months have lifted the 9/11 truth message into the mainstream news and public awareness. These developments include the Rethink911 campaign, CNN’s coverage of the alternative 9/11 Museum Guide and outreach effort, Richard Gage’s interview on C-SPAN, the debut of The Anatomy of a Great Deception, and the huge video billboard in Times Square depicting the collapse of World Trade Center Building 7. 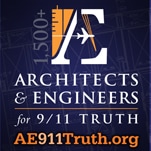 The reference to 28 pages relates to congressional bill H.R. 428, sponsored by U.S. Rep. Walter Jones (R-NC). It calls for the release of 28 pages that were redacted (actually, excised) from the Joint Congressional Inquiry Into Intelligence Community Activities Before and After the Terrorist Attacks of September 2001. The Joint Inquiry report dates back to 2002. Shortly after Rep. Jones’ bill was introduced last December, a group of 46 U.S. senators wrote to President Bush requesting that the 28 pages be declassified and made public. Ever since, former U.S. Sen. Robert Graham (D-FL), who chaired the Joint Inquiry committee, has continued to demand the release of these pages and even made a FOIA request to the Obama administration.

On September 9, Rep. Jones and several congressional cosponsors, along with 9/11 family members, held a press conference at the National Press Club to promote H.R. 428’s passage. Currently the legislation has 20 co-sponsors and growing support from 9/11 families. In addition, some members of the 9/11 Commission are on record calling for the pages’ release.

The bill’s cosponsors say their views on the 9/11 attacks changed after reading the 28 pages. Rep. Jones, for example, declared that “[the 28-redacted pages do] not deal with national security per se” but are “more about relationships. The information is critical to our foreign policy moving forward and should thus be available to the American people. If the 9/11 hijackers had outside help — particularly from one or more foreign governments — the press and the public have a right to know what our government has or has not done to bring justice to the perpetrators.” 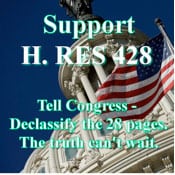 This bill is a serious call to action for the 9/11 Truth Movement. It should motivate each of us to pressure our own legislators to:

The release of the 28 pages will bring new attention to the events and consequences of 9/11, including the destruction of the three WTC skyscrapers, which is AE911Truth’s focus.

The issue also has the potential to bring to the fore the truth behind the current violence in Iraq and Syria. The entire global war on terror could be seen for what it is — part of an ulterior motive far different from what the public has been told. Many of us AE911Truth supporters have spent years studying the alternative research on 9/11. Now, with just a few hours of reading and simple actions, we can each make a impact.

For more information, see this website with its comprehensive overview of this issue online. It contains an explanation of the significance of H.R. 428 as well as detailed steps that seekers of 9/11 truth and justice can take. Our ongoing political actions will help ensure passage of the resolution. See the “Take Action” section of HR428.org for instructions, sample letters, and an automated function that delivers your letters directly to your member of Congress. Please review this material today, then do whatever you can to take this issue viral through your social networks and your personal and organizational contacts.

Come to New York if you can and help spread the word!

End America’s Blindness . . . Restore Its Vision . . . Open the 28 Pages
(Dedicated to President John F. Kennedy and the victims and families of 9/11)

Speakers and topics  include:

The crises in the world today require that nations move forward by returning to the outlook of peace through scientific and technological progress and through a willingness to engage in international cooperation, as embodied in the John F. Kennedy presidency. This challenge is now being renewed by over half of humanity, led by the BRICS (Brazil, Russia, India, China and South Africa) nations and their allies.

Let us, the American people, join this renewal process — by getting at the truth about 9/11. There is no better way to honor the memory of John F. Kennedy and the victims and family members of 9/11.

Join us on Saturday, November 22, for this important event.