Former
Minnesota Governor Jesse Ventura vehemently savaged the official 9/11 story on
a syndicated national radio show today, saying the WTC collapsed like a controlled
demolition and was pulverized to dust as he also highlighted the impossible 10
second free fall speed of the towers.

Ventura said that his initial reaction to
9/11 was much like most people at the time, and he accepted the official story
outright, a response he now regrets because he was in a position of power and
could have used it to raise a lot of pointed questions. 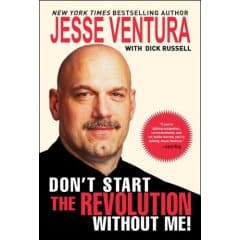 Jesse Ventura has had many lives–as a Navy SEAL, as a star of pro wrestling, as an actor, and as the governor of Minnesota. His previous books, I Ain’t Got Time to Bleed and Do I Stand Alone?, were both national bestsellers. Don’t Start the Revolution Without Me is the story of his controversial gubernatorial years and his life since deciding not to seek a second term as governor in 2002. Written with award-winning author Dick Russell at a secluded location on Mexico’s Baja Peninsula, Ventura’s new book reveals for the first time why he left politics–and why he is now considering reentering the arena with a possible independent run for the presidency in 2008.

In a fast-paced and often humorous narrative, Ventura pulls no punches in discussing our corrupt two-party system, the disastrous war in Iraq, and what he suspects really happened on September 11. He provides personal insights into the Clinton and Bush presidencies, and elaborates on the ways in which third parties are rendered impotent by the country’s two dominant parties. He reveals the illegal role of the CIA in states like Minnesota, sensitive and up-to-date information on the Blackwater security firm, the story of the American spies who shadowed him on a trade mission to Cuba, and what Fidel Castro told him about who really assassinated President John F. Kennedy. This unique political memoir is a must-read for anyone concerned about the direction that America will take in 2008.

“I kicked myself when it initially happened that the light didn’t go off but I was so shocked that this thing had even taken place that I apologize for not being more aware,” said Ventura, adding that watching Loose Change at the insistence of his son was part of the catalyst for his wake up call.

“When I finally did watch it I went through every emotion you could imagine, from laughing, crying, getting sick to my stomach, to the whole emotional thing,” said the former Governor.

“To me, questions haven’t been answered and are not being answered about 9/11,” said Ventura, before highlighting the collapse of Building 7, a 47-story tall skyscraper that was not hit by a plane but collapsed in its own footprint in the late afternoon of September 11.

“Two planes struck two buildings….but how is it that a third building fell 5 hours later?” asked Ventura, “How could this building just implode into its own footprint 5 hours later – that’s my first question – the 9/11 Commission didn’t even devote one page to that in their big volume of investigation,” added the former Governor.

Ventura then explored how it was possible that all three buildings could rapidly collapse at almost free fall speed.

“How could those buildings fall at the speed of gravity – if you put a stopwatch on them both of those World Trade Center buildings were on the ground in ten seconds – how can that be?” asked Ventura.

“If you took a billiard ball and dropped it from the height of the World Trade Center in a vacuum it would hit the ground in 9.3 seconds and if you took that same billiard ball and dropped it 10 stories at a time and merely stopped it and started it it would take 30 seconds – if you dropped it every floor of the World Trade Center to the ground, simply stopping and starting it on gravity it would take over 100 seconds to reach the ground,” he surmised.

“Jet fuel is four fifths kerosene – which is not a hot burning fuel – and they wanted us to believe it melted these steel structured girders and caused these buildings to pancake collapse to the ground?” he stated.

“I was on the site within two weeks after it happened and I saw none of these pancakes – wouldn’t they all be piled up in a huge mass on the ground and yet everything was blown into dust – when you look at it from that aspect none of it makes any sense,” said Ventura.

“Never before in the annuls of history has a fire caused a steel structure building to fall to the ground like these two did,” he concluded.

Having undergone Basic Underwater Demolition Seal training, Ventura is speaking from an experienced standpoint and he unequivocally stated that he thought the buildings were deliberately imploded.

“Upon looking at the film in super-slow motion and the way the buildings fell and comparing that to the way that they do like a controlled demolition of a hotel in Las Vegas, they both fell identical.”

“I did watch the film of Building 7 going down and in my opinion there’s no doubt that that building was brought down with demolition,” said the former Governor.

Ventura also questioned the lack of wreckage outside of the Pentagon after Flight 77 allegedly struck the building.

“When I was watching Loose Change with a friend of mine – he happens to work for a company that helps build the Boeing airplanes and they said that when the engines completely disappeared and were destroyed, his response was, excuse my French – bullshit!,” said Ventura.

“I turned to him and said why and he said because they’re made of titanium steel – they can’t disintegrate.”

Jones: “How important is it to expose false flag terrorism?”
Ventura: “That’s why I wrote the book, ‘Don’t start the Revolution Without Me?’ and I believe we must have a revolution in which to take our country back.”

Ventura said that the corporate media were going to continue to cover-up the truth about 9/11, but that the number of credible people speaking out and increasing education and knowledge about the subject would eventually reap dividends.

“We don’t want to lose our country, after all it’s still our country and until they put us down we have the power,” Ventura concluded.

The Governor’s bold comments about 9/11 come on the heels of similar views expressed by American icon Willie Nelson during an interview on the same radio show in February.