911truth.org was contacted this week by Charles W. (Bill) White, of Houston, who provided extensive information to Russ Baker in the writing of his explosive new Bush dynasty historical expose, Family Secrets: The Bush Dynasty, the Powerful Forces That Put It in the White House, and What Their Influence Means for America. More about him is in his letter to Senator Levin, below, wherein he expresses grave concern for the safety of nearly 6,000 Sailors and Marines who will carry out their duties aboard the Navy’s new nuclear-powered aircraft carrier, the USS  George H.W. Bush.

Today, that ship was christened in spite of White’s caution. An AP article, “Bush Visits Aircraft Carrier Named After Father,” describes the new ship and her christening thus:

It’s the perfect gift for an old Navy flier: 1,092 feet of flattop.

“What do you give a guy who has been blessed and has just about everything he has ever needed?” asked President George W. Bush from aboard the Navy’s newest ship. “Well, an aircraft carrier.”

The USS George H.W. Bush, a steel-gray vessel longer than three football fields and built at a cost of $6.2 billion … is one of the Nimitz class of nuclear-powered aircraft carriers, the largest warships in the world.

“The ship that bears our dad’s name is more than 95,000 tons of aluminum and steel,” Bush said from a podium tucked under the flight deck. “She will carry nearly 6,000 of the finest sailors and Marines in the world. She represents the craftsmanship of many skilled builders, and thousands of hours of preparation.” (read the rest)

Indeed, George H.W. Bush “has just about everything he has ever needed.” Why add insult to injury?

White expanded upon his concerns further by email:

“An important motive of mine for lighting this fuse is the safety and well-being of the flyers and crew of CVN-77. W. Bush has made the United States hated, feared and mistrusted across the globe. He has wantonly engaged in torture, name-calling, war baiting, and invasion and occupation of a foreign country based on a trumped up pretext. The resulting world-wide animosity against Bush, and anything bearing the Bush name, make the new aircraft carrier a prime target for a USS Cole-type terror attack, thereby unnecessarily jeopardizing the well being of the sailors who man the ship.

“It seems to me that the Nation would be better served if Bush satisfied his narcissistic need for further approbation [he already had the CIA’s headquarters at Langley and Houston’s Intercontinental Airport renamed for himself] by ordering a set of vanity license plates.”

In addition to Senator Levin, the following letter was sent to Representative Ike Skelton, Chairman, Armed Services Committee, US House of Representatives. (If needed, press CTRL and + keys to enlarge.) 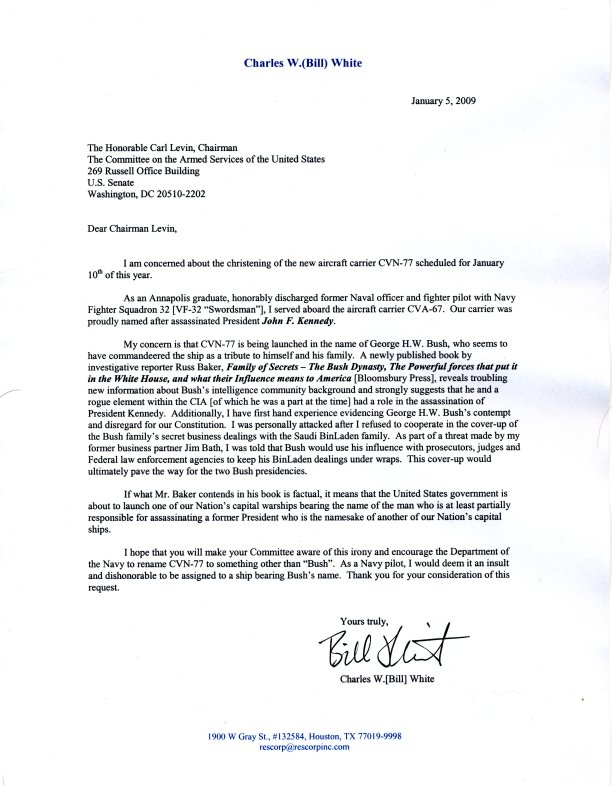