In Germany the daily newspaper Junge Welt on March, 4 2009 published
following article on the new petition.

At long last politicians from several countries succeeded to unite in calling for a “new, really independent
investigation to find out what happened on 9/11.” In the petition 12 politicians
from seven countries call on US president Barack Obama to authorize such an
investigation.

The investigations until now were
conducted only by people who “were closely connected with the Bush/Cheney
administration, or where even working in it.”

Their findings differed radically
from results independent researchers from different fields have reached. These
researcher-groups–among them architects, engineers, firefighters, legal professionals,
pilots, religious leaders, academics, veterans and medical professionals–for
a long time have called for a new investigation. Now the time had come to have
politicians take it to heart. (Read the letter to President Obama.)

Doubts about the official version
of the collapse of the towers of the World Trade Center on 9/11 have been on
the mind of many people in the last years. A collapse of the of the myth about
Osama and his 19 bandits could have incalculable consequences.

It’s going to be interesting which German parliamentarian will dare to affiliate with the group of Political Leaders
for 9/11 Truth (pl911truth.com).
As of now the former Secretary of State in the Defense Ministry Andreas von Bülow signed the petition. In the UK the former Minister of Environment Michael Meacher joined the group; in the USA five more politicians signed the petition, among them the former governor of Minnesota, Jesse Ventura and former US Congressman Dan Hamburg. Others are the Italians Giulietto Chiesa and Gianni Vattimo and Paul Lannoye from Belgium, three active and one former EU-parliamentarians. 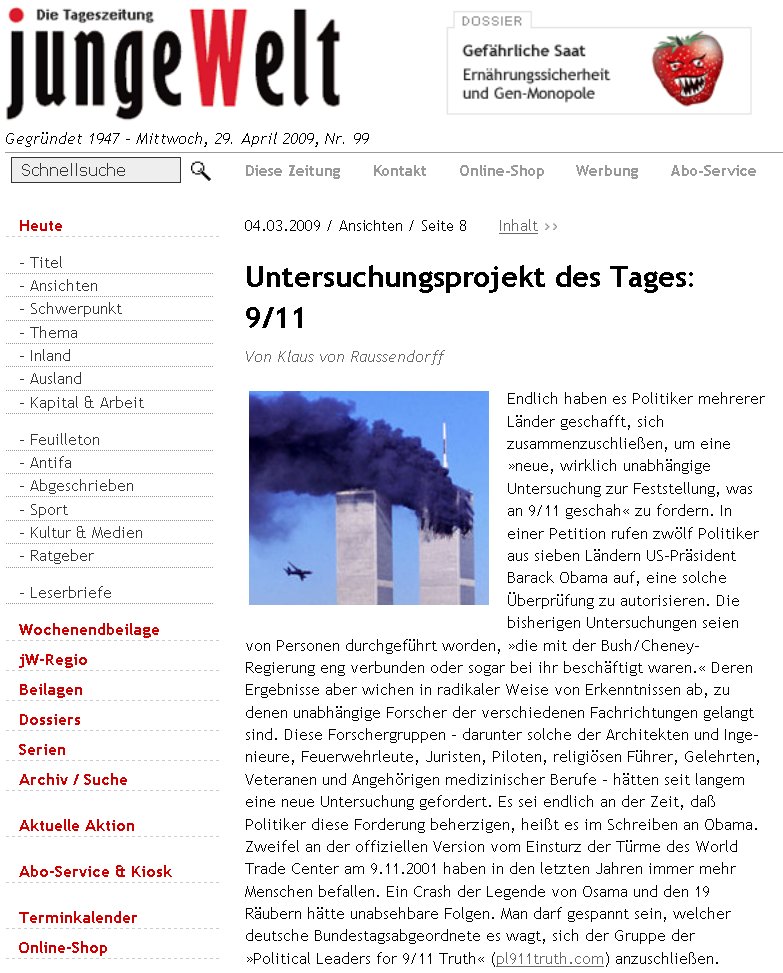 Author of the article Klaus von Raussendorff redaktion- at- aikor.de

In 2009 under the leadership of Yukihisa Fujita, a member of Parliament, Japan, and Karen S. Johnson, a former member of the Senate of the State of Arizona, USA, a new initiative has been launched that calls for a new independent investigation of 9/11 by political leaders.