Sen. Lindsey Graham incorrectly claimed that “all the hijackers who attacked — attacked us on 9/11 were visa overstays.” Two of the 19 hijackers were in the U.S. on expired visas as of Sept. 11, 2001, according to the 9/11 Commission.

Graham, a South Carolina Republican who is running for president, made his remarks on CNN’s “State of the Union,” while discussing immigration. He said the U.S. needs not only to secure the border with Mexico, but also to revamp the visa program that allows foreigners to stay for extended visits.

Graham, July 12: All the hijackers who attacked — attacked us on 9/11 were visa overstays. So it’s more than just the border. You have got to control your visa program.

It’s true that the 9/11 hijackers took advantage of a flawed U.S. visa program. A 241-page report produced by the staff of the 9/11 Commission, “9/11 and Terrorist Travel,” detailed numerous flaws in the visa program that allowed the hijackers to gain entry to and remain in the U.S. to carry out the attacks.

That report — a self-described “story of how 19 hijackers easily penetrated U.S. border security” — explained how many of the hijackers gamed the visa system by supplying fraudulent information to gain entry and/or by violating the terms of the visa while in the U.S.

But that report said that only two hijackers — Satam al Suqami and Nawaf al Hazmi, both non-pilots on the day of the attacks — overstayed their visas.

9/11 Commission staff report, Aug. 21, 2004: That Suqami was limited to a business instead of a tourist stay meant that he and Nawaf al Hazmi (who overstayed his tourist visa despite filing for an extension of his stay in July 2000) were the only operatives who had overstayed their authorized lengths of stay as of September 11.

Two other hijackers – pilots Mohamed Atta and Marwan al Shehhi – overstayed their visas during preparations for the attack, but they had approved visas as of Sept. 11, 2001, according to a staff statement presented at a 9/11 Commission public hearing on Jan. 26, 2004.

Their case is an example not of visa overstays but of bureaucratic bungling. Atta and al Shehhi were given tourist visas, even though the law required them to have student visas, and even though there were discrepancies in their stories that initially caught the attention of federal inspectors.

9/11 Commission staff statement, Jan. 26, 2004: Marwan al Shehhi came in through Newark in late May 2000, followed a week later by Mohamed Atta. Both were admitted as tourists and soon entered flight school in Florida. In September they did file applications to change their status. Before 9/11, regulations allowed tourists to change their status at any time, so they were in compliance. But both overstayed their periods of admission and completed flight school to obtain commercial pilot licenses. Atta and al Shehhi then left within a few days of one another and returned within a few days of one another in January 2001, while their change in visa status from tourist to student was still pending.

In all, “at least six of the 9/11 hijackers violated immigration laws,” according to the staff statement. In addition to the four hijackers we already mentioned, Ziad Jarrah entered on a tourist visa but then enrolled in flight school for six months without changing his immigration status from tourist to student as required by law, and Hani Hanjour came on a student visa but never attended school, the 9/11 staff statement said.

Graham is a repeat offender on this issue. He said something similar two years ago, when he claimed that all 19 hijackers overstayed their student visas. As we wrote, only one had a student visa and he did not overstay his visa.

Editor’s Note:
Here are a few copies of some of the VISA applications as published at the National Review on 10/9/02. 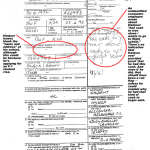 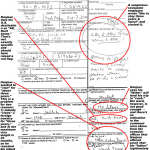 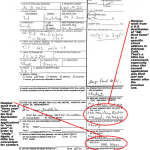 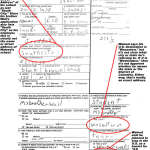 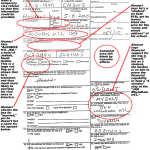