No, this is not the fantasy world of a 12-year-old boy.

It is, according to a new book, part of the hidden reality behind the Pentagon’s classified, or “black,” budget that delivers billions of dollars to stealthy armies of high-tech warriors. The book offers a glimpse of this dark world through a revealing lens — patches — the kind worn on military uniforms.

“It’s a fresh approach to secret government,” Steven Aftergood, a security expert at the Federation of American Scientists in Washington, said in an interview. “It shows that these secret programs have their own culture, vocabulary and even sense of humor.”

One patch shows a space alien with huge eyes holding a stealth bomber near its mouth. “To Serve Man” reads the text above, a reference to a classic “Twilight Zone” episode in which man is the entree, not the customer. “Gustatus Similis Pullus” reads the caption below, dog Latin for “Tastes Like Chicken.”

The classified budget of the Defense Department, concealed from the public in all but outline, has nearly doubled in the Bush years, to $32 billion. That is more than the combined budgets of the Food and Drug Administration, the National Science Foundation and the National Aeronautics and Space Administration.

Those billions have expanded a secret world of advanced science and technology in which military units and federal contractors push back the frontiers of warfare. In the past, such handiwork has produced some of the most advanced jets, weapons and spy satellites, as well as notorious boondoggles.

Budget documents tell little. This year, for instance, the Pentagon says Program Element 0603891c is receiving $196 million but will disclose nothing about what the project does. Private analysts say it apparently aims at developing space weapons.

Trevor Paglen, an artist and photographer finishing his Ph.D. in geography at the University of California, Berkeley, has managed to document some of this hidden world. The 75 patches he has assembled reveal a bizarre mix of high and low culture where Latin and Greek mottos frame images of spooky demons and sexy warriors, of dragons dropping bombs and skunks firing laser beams.

“Oderint Dum Metuant,” reads a patch for an Air Force program that mines spy satellite images for battlefield intelligence, according to Mr. Paglen, who identifies the saying as from Caligula, the first-century Roman emperor famed for his depravity. It translates “Let them hate so long as they fear.”

Wizards appear on several patches. The one hurling lightning bolts comes from a secret Air Force base at Groom Lake, northwest of Las Vegas in a secluded valley. Mr. Paglen identifies its five clustered stars and one separate star as a veiled reference to Area 51, where the government tests advanced aircraft and, U.F.O. buffs say, captured alien spaceships.

The book offers not only clues into the nature of the secret programs, but also a glimpse of zealous male bonding among the presumed elite of the military-industrial complex. The patches often feel like fraternity pranks gone ballistic.

The book’s title? “I Could Tell You but Then You Would Have to Be Destroyed by Me,” published by Melville House. Mr. Paglen says the title is the Latin translation of a patch designed for the Navy Air Test and Evaluation Squadron 4, at Point Mugu, Calif. Its mission, he says, is to test strike aircraft, conventional weapons and electronic warfare equipment and to develop tactics to use the high-tech armaments in war.

“The military has patches for almost everything it does,” Mr. Paglen writes in the introduction. “Including, curiously, for programs, units and activities that are officially secret.”

He said contractors in some cases made the patches to build esprit de corps. Other times, he added, military units produced them informally, in contrast to official patches.

Mr. Paglen said he found them by touring bases, noting what personnel wore, joining alumni associations, interviewing active and former team members, talking to base historians and filing requests under the Freedom of Information Act.

A spokesman for the Pentagon, Cmdr. Bob Mehal, said it would be imprudent to comment on “which patches do or do not represent classified units.” In an e-mail message, Commander Mehal added, “It would be supposition to suggest ‘anyone’ is uncomfortable with this book.” 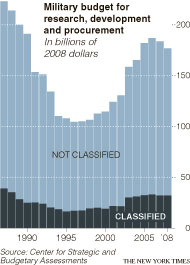 Graphic Source: Center for Strategic and Budgetary Assessments. **.
Each year, the Center for Strategic and Budgetary Assessments, a private group in Washington, publishes an update on the Pentagon’s classified budget. It says the money began to soar after the two events of Mr. Bush’s coming into office and terrorists’ 9/11 attacks.

What sparked his interest, Mr. Paglen recalled, were Vice President Dick Cheney’s remarks as the Pentagon and World Trade Center smoldered. On “Meet the Press,” he said the nation would engage its “dark side” to find the attackers and justice. “We’ve got to spend time in the shadows,” Mr. Cheney said. “It’s going to be vital for us to use any means at our disposal, basically, to achieve our objective.”

In an interview, Mr. Paglen said that remark revived memories of his childhood when his military family traveled the globe to bases often involved in secret missions. “I’d go out drinking with Special Forces guys,” he recalled. “I was 15, and they were 20, and they could never say where they where coming from or what they were doing. You were just around the stuff.”

Intrigued by Mr. Cheney’s remarks as well as his own recollections, Mr. Paglen set off to map the secret world and document its expansion. He traveled widely across the Southwest, where the military keeps many secret bases. His labors, he said, resulted in his Ph.D. thesis as well as a book, “Blank Spots on a Map,” that Dutton plans to publish next year.

The research also led to another book, “Torture Taxi,” that Melville House published in 2006. It described how spies kidnapped and detained suspected terrorists around the globe.

“Black World,” a 2006 display of his photographs at Bellwether, a gallery in Chelsea, showed “anonymous-looking buildings in parched landscapes shot through a shimmering heat haze,” Holland Cotter wrote in The New York Times, adding that the images “seem to emit a buzz of mystery as they turn military surveillance inside out: here the surveillant is surveilled.”

In this research, Mr. Paglen became fascinated by the patches and started collecting them and displaying them at talks and shows. He said a breakthrough occurred around 2004, when he visited Peter Merlin, an “aerospace archaeologist” who works in the Mojave Desert not far from a sprawling military base. Mr. Merlin argued that the lightning bolts, stars and other symbols could be substantive clues about unit numbers and operating locations, as well as the purpose of hidden programs.

“These symbols,” Mr. Paglen wrote, “were a language. If you could begin to learn its grammar, you could get a glimpse into the secret world itself.”

His book explores this idea and seeks to decode the symbols. Many patches show the Greek letter sigma, which Mr. Paglen identifies as a technical term for how well an object reflects radar waves, a crucial parameter in developing stealthy jets.

A patch from a Groom Lake unit shows the letter sigma with the “buster” slash running through it, as in the movie “Ghost Busters.” “Huge Deposit — No Return” reads its caption. Huge Deposit, Mr. Paglen writes, “indicates the bomb load deposited by the bomber on its target, while ‘No Return’ refers to the absence of a radar return, meaning the aircraft was undetectable to radar.”

In an interview, Mr. Paglen said his favorite patch was the dragon holding the Earth in its claws, its wings made of American flags and its mouth wide open, baring its fangs. He said it came from the National Reconnaissance Office, which oversees developing spy satellites. “There’s something both belligerent and weirdly self-critical about it,” he remarked. “It’s representing the U.S. as a dragon with the whole world in its clutches.”

The field is expanding. Dwayne A. Day and Roger Guillemette, military historians, wrote an article published this year in The Space Review (www.thespacereview.com/article/1033/1) on patches from secret space programs. “It’s neat stuff,” Dr. Day said in an interview. “They’re not really giving away secrets. But the patches do go farther than the organizations want to go officially.”

Mr. Paglen plans to keep mining the patches and the field of clandestine military activity. “It’s kind of remarkable,” he said. “This stuff is a huge industry, I mean a huge industry. And it’s remarkable that you can develop these projects on an industrial scale, and we don’t know what they are. It’s an astounding feat of social engineering.”