Late last night, Scott Olsen, a former Marine, two-time Iraq war veteran, and member of Iraq Veterans Against the War, sustained a skull fracture after being shot in the head with a police projectile while peacefully participating in an Occupy Oakland march. The march began at a downtown library and headed towards City Hall in an effort to reclaim a site–recently cleared by police–that had previously served as an encampment for members of the 99% movement.

Scott joined the Marines in 2006, served two-tours in Iraq, and was discharged in 2010. Scott moved to California from Wisconsin and currently works as a systems network administrator in Daly, California.

Scott is one of an increasing number of war veterans who are participating in America’s growing Occupy movement. Said Keith Shannon, who deployed with Scott to Iraq, “Scott was marching with the 99% because he felt corporations and banks had too much control over our government, and that they weren’t being held accountable for their role in the economic downturn, which caused so many people to lose their jobs and their homes.”

Scott is currently sedated at a local hospital awaiting examination by a neurosurgeon. Iraq Veterans Against the Wars sends their deepest condolences to Scott, his family, and his friends. IVAW also sends their thanks to the brave folks who risked bodily harm to provide care to Scott immediately following the incident.

Iraq Veterans Against the War is nonprofit 501(c)3 advocacy group of veterans and active-duty US military personnel who have served in the U.S. Military since September 11, 2001. IVAW currently has over 1,400 members in fifty states, as well as in Canada, Europe, Iraq and Afghanistan.

We are all Scott Olsen: Occupy Oakland #OWS

Late last night, Scott Olsen, a former Marine, two-time Iraq war veteran, and member of Iraq Veterans Against the War, sustained a skull fracture after being shot in the head with a police projectile while peacefully participating in an Occupy Oakland march. He remains unconscious in critical condition at Oakland’s Highland Hospital.

Olsen was hit at close range. After demonstrators rush to Olsen’s aid, an Oakland cop waits a few beats before lobbing a second tear-gas canister at the crowd. They are attending to Olsen when the canister explodes, sending smoke everywhere.

Press release from Iraq Veterans Against the War. [See above.]

Our hearts and prayers go out to Scott and his family.

Call Mayor Quan’s office and demand that she investigate this incident and allow peaceful protests to continue: (510) 238-3141 Police in riot gear with rifles and batons: 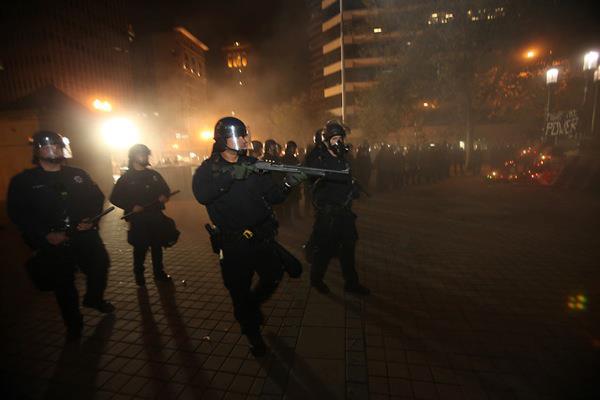 Today at Occupy Wall Street we are looking across the country to the city of Oakland, where last night our fellow Americans were subjected to violence at the hands of their own government for exercising the constitutional freedoms their government is sworn to protect. Last night police forces violently raided Occupy Oakland, arresting 85 people and brutalizing many peaceful participants, using excessive physical force, tear gas, and dangerous projectile rounds.

Peaceful Protest is An American Birthright, Not a Crime

Among those injured is Scott Olson, a Marine Corps veteran who served in Iraq. Olsen is in the hospital with a fractured skull.

“Scott is in stable but serious condition as the neurologists decide whether to take him into surgery or the ICU,” said Joshua Shepherd, a friend of Olsen’s. “Oakland Police Department fired a tear gas canister at his head, fracturing his skull.”

Video of the incident with Scott Olsen: Watch here.

It is unconscionable that American government officials would sanction the use of such extreme force against peaceful citizens. 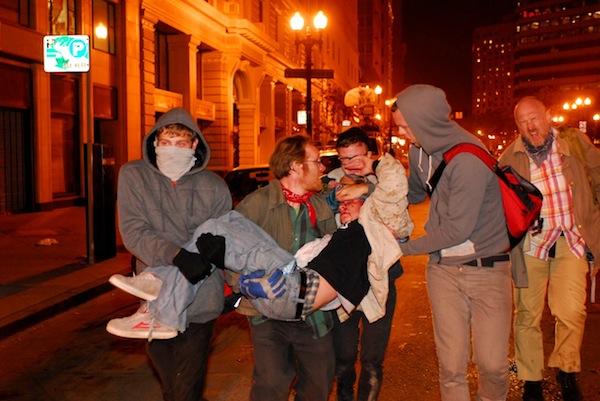 Occupy Oakland has been a public forum, set up on public land, concerned with critical public issues about the nation’s financial crisis, consolidation of wealth and power, and the ability of citizens to meaningfully participate in the democratic process. This brutality carried out on the orders of city government, sends a chilling message to those who want to engage in civic processes to work for social change.

Over a month ago, we went to the doorstep of Wall Street to say “enough!” That message has resonated across the country and around the world. Occupy Wall Street continues to build, and a national movement of peaceful occupations and civic engagement has sprung up in every corner.

Public officials must listen to the grievances of this popular movement. It is absolutely unacceptable to attempt to dissuade civic engagement through the use of brutality, repression and retaliation against movement participants. This is America. All Americans have the freedom to peacefully protest our government. That right defines who we are as a country and a people, and when it is denied, all of America is the poorer for it.

The Mayor of Oakland — and mayors and city governments across the country — should get on the right side of history and honor all Americans’ freedom to peacefully assemble and to civically engage.

We call on all concerned people to send Oakland Mayor Quan a message that the actions she sanctioned are unconscionable. We ask supporters to please sign this petition to Mayor Quan and to forward it:

Tonight in Manhattan, we will hold a march in solidarity with Occupy Oakland (9:00pm. Details to be announced.)

We will continue to build a movement to empower the 99% and to hold Wall Street and government accountable. 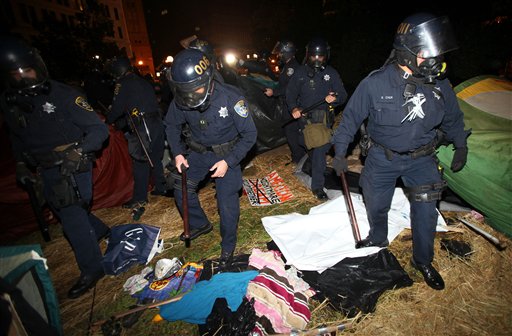 Occupy Oakland Will Continue to Stand

Police tore down the Occupy Oakland encampment early Tuesday morning around 5:00am. There were estimated to be over 200 officers in riot gear present to remove protesters, set up a barricades and clear the encampment. About 75 arrests were made and bail was set at $10,000 each protestor, holding them until their arraignment. After, police shut down the second encampment at Snow Park.

As demonstrators returned to Oscar Grant Plaza, the police read them the Riot Act and gave them a five minute warning to leave. Shortly after the warning, ABCs helicopter news coverage ended their live broadcast. Moments later tear gas, flash bangs, and beanbags were launched at the crowd.

The demonstrators dispersed and regrouped. After the tear gas cleared, they returned to the Plaza. There were 2-300 present as another round of tear gas had been launched at 10:36pm. At this time there were aerial cameras streaming live.

From the aeriel view it was unclear why a group of people ran back into the gassed area. The following video was submitted to Occupy Together late this morning. It details the event of several people rushing to the aid of an injured protester only to be met with a flash-bang grenade aimed directly at them. Scott Olsen, Iraq war vet, is reported to be in critical condition with a fractured skull and brain swelling.

Minutes later, more than 100 were arrested. A handful of protestors remained through the night. The plaza had calmed by the morning, and a 6-foot chain-link fence is being erected by workers around Oscar Grant Plaza. More images and videos are emerging through the day. There are reports that US law enforcement have asked Google to censor several videos exposing police brutality from YouTube.

Occupy Oakland demonstrators are planning on meeting at Oscar Grant Plaza for a general assembly at 6:00pm today.

These events are also being detailed in this live blog.