My last blog post was wrong. As of a week ago, it does matter who is elected president. That’s because one of the candidates has openly called for a new investigation into the crimes of 9/11.

In a recent statement on the subject, Jill Stein made the following important comments and promises: 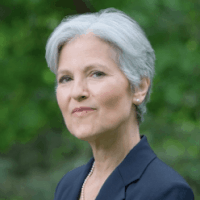 In May, a national poll showed that, “An unprecedented 91 percent of voters 28 or younger favor having an independent on the ballot, and 65 percent of respondents are willing to support a candidate who isn’t Clinton or Trump.”

Jill Stein is on the ballot in 44 states. It’s not clear what chance she has given the serious, inherent problems with the U.S. voting process and electronic voting machines. But she is the only candidate discussing what matters to the American people as opposed to what matters to the ruling oligarchy.

As Gore Vidal once said, “There is only one party in the United States, the Property Party … and it has two right wings: Republican and Democrat.” Moving away from that sad and dangerous state of affairs will not be easy but supporting courageous voices in the national discussion helps. To that end, people who want real change need to send the oligarchs a strong message on November 6 by supporting Jill Stein and the Green Party.

Kevin Ryan blogs at Dig Within.