The story of Jose Padilla, continuing through the events of yesterday, expresses so much of the true nature of the War on Terror and especially America’s justice system. In 2002, the American citizen was arrested at Chicago’s O’Hare Airport, publicly labeled by John Ashcroft as The Dirty Bomber, and then imprisoned for the next three years on U.S. soil as an “enemy combatant” without charges of any kind, and denied all  contact with the outside world, including even a lawyer. During his lawless incarceration, he was kept not just in extreme solitary confinement but extreme sensory deprivation as well, and was abused and tortured   to the point of severe and probably permanent mental incapacity. (Bush lawyers told a court that they were unable to produce videos of Padilla’s interrogations because those videos were mysteriously and tragically “lost”).

Needless to say, none of the government officials responsible for this abuse of a U.S. citizen on American soil has been held accountable in any way. That’s because President Obama decreed that Bush officials shall  not be criminally investigated for War on Terror crimes, while his Justice Department vigorously defended John Yoo, Donald Rumsfeld and other responsible functionaries in civil suits brought by Padilla seeking  damages for what was done to him.

As usual, the Obama DOJ cited national security imperatives and sweeping theories of presidential power to demand that Executive Branch officials be fully shielded from judicial scrutiny (i.e., shielded from the  rule of law) for their illegal acts (the Obama DOJ: “Here, where Padilla’s damage claims directly relate, inter alia, to the President’s war powers, including whether and when a person captured in this  country during an armed conflict can be held in military detention under the laws of war, it would be particularly inappropriate for this Court to unnecessarily reach the merits of the constitutional claims” (emphasis added)). With one rare exception, federal courts, as usual, meekly complied. Thus, a full-scale shield of immunity has been constructed around the high-level government officials who put Padilla in a hermetically sealed cage with no charges and then abused and tortured him for years.

The treatment Padilla has received in the justice system is, needless to say, the polar opposite of that enjoyed by these political elites. Literally days before it was required to justify to the U.S. Supreme Court how it could imprison an American citizen for years without charges or access to a lawyer, the Bush administration suddenly indicted Padilla — on charges unrelated to, and far less serious than, the accusation that he was A Dirty Bomber — and then successfully convinced the Supreme Court to refuse to decide the legality of Padilla’s imprisonment on the grounds of “mootness” (he’s no longer being held without charges so there’s nothing to decide).

At Padilla’s trial, the judge excluded all evidence of the abuse to which he was subjected and even admitted statements he made while in custody before he was Mirandized. Unsurprisingly, Padilla was convicted on charges of “supporting Islamic terrorism overseas” — but not any actual Terrorist plots (“The government’s chief evidence was an application form that government prosecutors said Mr. Padilla, 36, filled out to attend an Al Qaeda training camp in Afghanistan in 2000″) — and then sentenced to 17 years in prison, all above and beyond the five years he was imprisoned with no due process.

Not content with what was done to Padilla, the Bush DOJ — and then the Obama DOJ — contested the sentence on appeal, insisting that it was too lenient; Padilla also appealed, arguing that the trial court made  numerous errors in excluding his evidence while allowing the Government’s. Yesterday, a federal appeals panel of the 11th Circuit issued a ruling, by a 2-1 vote, rejecting each and every one of Padilla’s arguments. It then took the very unusual step of vacating the 17-year-sentence imposed by the trial court as too lenient and, in effect, ordered the trial judge to impose a substantially harsher prison term:

Padilla’s sentence is substantively unreasonable because it does not adequately reflect his criminal history, does not adequately account for his risk of recidivism, was based partly on an impermissible  comparison to sentences imposed in other terrorism cases, and was based in part on inappropriate factors .
. . .

As the dissenting judge explained, this decision is extraordinary because trial judges — not judges sitting afterward on appeal — are the ones who hear all the evidence and thus have very wide discretion to determine the appropriate sentence. But more so, in this case, a sentence less than the full maximum was warranted because “the trial judge correctly concluded that a sentence reduction is available to offenders who  have been subjected to extraordinarily harsh conditions of pre-trial confinement.” About that point, the dissenting judge documented:

Padilla presented substantial, detailed, and compelling evidence about the inhumane, cruel, and physically, emotionally, and mentally painful conditions in which he had  already been detained for a period of almost four years. For example, he presented evidence at sentencing of being kept in extreme isolation at the military brig in South Carolina where he  was subjected to cruel interrogations, prolonged physical and mental pain, extreme environmental stresses, noise and temperature variations, and deprivation of sensory stimuli and sleep.

In sentencing Padilla, the trial judge accepted the facts of his confinement that had been presented both during the trial and at sentencing, which also included evidence about the impact on one’s  mental health of prolonged isolation and solitary confinement, all of which were properly taken into account in deciding how much more confinement should be imposed. None of these factual findings, nor the trial judge’s consideration of them in fashioning Padilla’s sentence, are challenged on appeal by the government or the majority.

Thus: American officials who are responsible for this “inhumane” and “cruel” abuse of detainees act with full impunity, as usual. Those who are its victims are not merely denied all redress (though they are), and do not merely have the courthouse doors slammed in their faces in the name of secrecy, national security and presidential power (though they do), but they are also mercilessly punished to the fullest extent possible.

It should be said that part of what happened here is just the typical politicization of the judiciary, as the two-judge majority was comprised of a hard-core right-wing Reagan/Bush 41 appointee from Alabama (Joel Dubina), while the other was one of Bush 43’s most controversial appointees, the former Alabama Attorney General who was filibustered by the Democrats and allowed onto the bench only by virtue of the “Gang of 14” compromise (William Pryor). Meanwhile, the dissenting judge was born in Mexico to Syrian parents and, after moving to Miami at the age of 6, became the first female judge (as well as the first Hispanic and Arab American judge) on the Florida Supreme Court (rising to Chief Justice), and was a Clinton appointee to the federal appeals court (Rosemary Barkett); Barkett, incidentally, dissented from an 11th Circuit ruling denying a habeas petition to Troy Davis, the African-American death row inmate scheduled to be executed by the State of Georgia this week despite mountains of evidence showing his innocence. So this episode highlights one of the few genuine differences that remain between the two parties that can truly impact people’s lives: their judicial appointments.

But the overriding theme is what we have seen time and again, that which — as it turns out — is the subject of my book to be released next month: America is plagued by a two-tiered justice system in which political and financial elites enjoy virtually absolute immunity for even the most egregious of crimes, while ordinary Americans (and especially fully stigmatized ones like Padilla) are subject with few defenses to the world’s largest and one of its most merciless systems of punishment. Thus do Jose Padilla’s lawless jailers and torturers walk free and prosper, while no punishment is sufficiently harsh for him.

Almost immediately after I published this, it was announced that Troy Davis’ last chance for clemency has been denied, virtually assuring that a likely innocent man will be killed by the State of Georgia tomorrow. Obviously, everything I just wrote applies in abundance to that event. 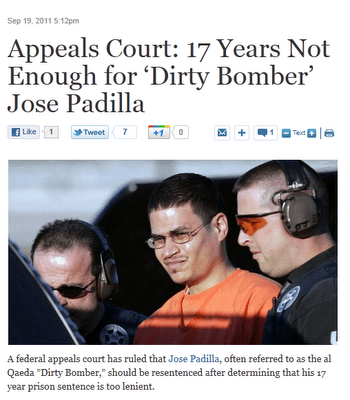 Padilla was never even charged with, let alone convicted of, having anything to do with a “dirty bomb.” “Dirty Bomber” was the villain nickname given to him by Bush officials and mindlessy repeated by its media to justify the treatment to which he was subjected. The U.S. Government gave up long ago using this accusation to demonize him (NYT on his conviction: “The dirty bomb accusations were not mentioned during Mr. Padilla’s three-month trial here“), but their lying “watchdog media” servants continue unabated. Who would possibly object to a longer prison term for A Dirty Bomber who tried to detonate radioactive weapons in American cities? The fact that not even the Government charged him with that is no deterrent to its media continuing to claim he did.

But 17 years in a torture system like that — on top of the 5 years of abuse he endured — is insufficient: “too lenient.”