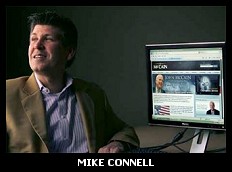 Yesterday, after a contentious three hour hearing in an Akron, Ohio federal court, the judge ordered Bush/Rove IT expert Michael Connell to submit to a two hour deposition less than 24 hours before the start of the 2008 election. The Court ruled that Ohio attorney Cliff Arnebeck can question Connell under oath about Man in the Middle computer manipulations, the use of Trojan horses to control election results from a remote location, and the role of Triad in election manipulations.

However, in a strange twist, the judge agreed with demands from Connell’s attorney to keep under seal any testimony about threats and intimidation of Connell by others including Karl Rove. This is seen as necessary to protect possible criminal charges against those who may have engaged in obstruction of justice in this case.

A couple of notes here: We believe that Connell should not pull an Alexander Butterfield by waiting for a direct question from Mr. Arnebeck as to what he knows about rigged elections. Instead, Connell should be prepared to come clean from the start knowing that this is just the beginning of the inquiry. We have lots of names and lots of people providing us information about these rigged elections. Connell is not longer under the protectorate of the Bush family. There is a new dynamic here and Connell can either fight it and go down with the ship or get out in front and cooperate with full immunity for him and his wife.

Also, Connell must now know that the gig is up—he can’t steal this election. If he has set up the network for such a theft, he knows that he has to shut it down prior to Tuesday because he will get caught. People must now be held accountable and Connell has a unique opportunity to do that by cooperating in full and telling what he knows about election rigging, White House email destruction, front groups, and orders from Karl Rove and others to do illegal things.

10/28/08: Thirteen Election Integrity Experts Discuss E-Voting Problems and How to Stop Them

Of course there are others …