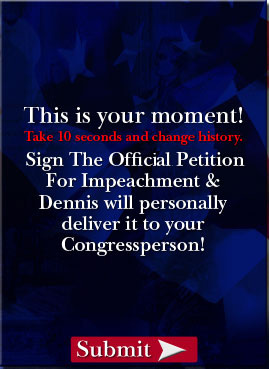 Only one Congressman had the personal courage and the profound respect for our Constitution to stand on the floor of the House of Representatives and exercise his right and his responsibility to bring Articles of Impeachment against President George W. Bush – Ohio Representative Dennis J. Kucinich.

Now, Americans who cherish our Democracy and the Constitutional principles upon which it was founded can stand up, speak out, and take action by signing the one official petition that carries the full and unqualified support of the one and only original sponsor of the impeachment resolution: Congressman Dennis J. Kucinich.

THEREFORE, BE IT RESOLVED that President George W. Bush has acted in a manner contrary to his trust as President and Commander in Chief, and subversive of constitutional government, to the prejudice of the cause of law and justice and to the manifest injury of the people of the United States and that he be impeached for high crimes and misdemeanors.

So says Constitutional law expert Jonathan Turley in an interview with MSNBC’s Keith Olbermann about Congressman Dennis Kucinich’s 35 Articles of Impeachment against President George W. Bush — a document that Olbermann calls “a remarkably lengthy and thorough record of high crimes and misdemeanors.

Click this link to sign now! Then, get busy calling the judiciary committee members to demand they take action, and your own Representative to demand s/he supports and/or cosponsors the impeachment bills introduced by Kucinich against both Bush AND Cheney.