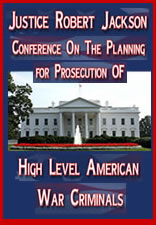 In the tradition of America’s Chief Prosecutor at the Nuremburg War Crimes Trials
after World War II, Justice Robert Jackson, the Conference’s purpose is “to
hold high U.S. officials accountable in courts of law and, if guilt is found,
to obtain appropriate punishments. Otherwise,” said the Conference’s convener,
Lawrence Velvel, “the future will be threatened by additional examples
of Executive lawlessness by leaders who need fear no personal consequences”
for their actions, leading to the “possibility of more Viet Nams, more
Iraqs, and more repression.”

Velvel emphasized: “This is intended to be a planning conference, one at
which plans will be laid, and necessary organizational structures will be set
up, to seek prosecutions to determine guilt and, if guilt is found, appropriate
punishments.”

Attendees will hear from prominent authorities on international law, criminal
prosecutions, and constitutional rights who are determined to give meaning to
Justice Jackson’s words: “The common sense of mankind demands that law
shall not stop with the punishment of petty crimes by little people. It must
also reach men who possess themselves of great power and make deliberate and
concerted use of it to set in motion evils which leave no home in the world
untouched.”

Topics to be discussed, Velvel said, include:

—What international and domestic crimes were committed, which facts show
crimes under which laws, and what punishments are possible.

—Which high level Executive officials and Federal judges and legislators
as well, if any are chargeable with crimes.

—Which international tribunals, foreign tribunals and domestic tribunals
(if any) can be sed and how to begin cases and/or obtain prosecutions before
them.

—The possibility of establishing a Chief Prosecutor’s Office such as the
one at Nuremburg.

—An examination of cases already brought and their outcomes.

—Creating an umbrella Coordinating Committee with representatives from
the increasing number of organizations involved in war crimes cases.

—Creating a Center to keep track of and organize compilations of relevant
briefs, articles, books, opinions, and facts, etc., on war crimes and prosecutions
of war criminals.

Scheduled to address the Conference include:

—Phillippe Sands, Professor of Law and Director of the Centre of International
Courts and Tribunals at University College, London . He is the author of “Torture
Team: Rumsfeld’s Memo and the Betrayal of American Values” (Penguin/Palgrave
Macmillan), among other works.

—Jordan Paust, Professor of Law at the University of Houston and author
of “Beyond The Law.”

—Ann Wright, a former U.S. Army colonel and U.S. Foreign Service official
who holds a State Department Award for Heroism and who taught the Geneva Conventions
and the Law of Land Warfare at the Special Warfare Center at Ft. Bragg, N.C.
She is the coauthor of “Dissent: Voices of Conscience.”

Peter Weiss, Vice President of the Center For Constitutional Rights, which was
recently involved with war crimes complaints filed in Germany and France against
former Defense Secretary Donald Rumsfeld and others.

—Benjamin Davis, Associate Professor at the University of Toledo College
of Law and former American Legal Counsel for the Secretariat of the International
Court of Arbitration.

—Francis Boyle, Professor of International Law at the University of Illinois
at Urbana-Champaign, responsible for drafting the Biological Weapons Anti-Terrorism
Act of 1989, and the U.S. implementing legislation for the 1972 Biological Weapons
Convention.

—Lawrence Velvel, a leader in the field of law school education reform,
has written numerous internet articles on issues relevant to the conference.