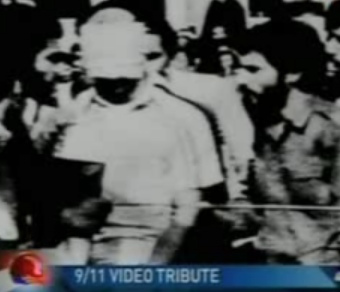 At 9:11pm (CST), the MSNBC coverage cut to a video being projected onto the
main screen at the RNC. At that point, Tom Brokaw introduced the video as follows:

Tom Brokaw: OK, let’s go now, Keith, if we can, down to the floor. We want
to share with our viewers the ‘Tribute To The Victims of 9/11.’

So, that was the introduction the networks gave to the video–no doubt lifted
from a press release given to them by the RNC. Normal practice, I suppose. But
here is the astoundingly immoral thing that happened next, rather than show
a video ‘tribute’ to the victims of 9/11, the McCain team showed a video ‘history’
of 9/11 that began like this:

(Cut to: image of 1998 Al Qaeda bombings of Kenya and Somalia)

(Cut to: second image of 1998 Al Qaeda bombing of Kenya and Somalia)

Narrator: At our embassies.

Narrator: They grew ever more bold. Their call was, ‘On those who believe
in God, and hopes for reward–‘

Narrator: And kill us they did. This time on American soil. The date was
September 11th–9/11.

(Violent burst of flames slashes through Tower 2–the second plane. Crash
is punctuated by high-pitched flourish of music followed by slow rising fireball)

Narrator: This enemy sword to our destruction has been at war with us for
decades. This we now know.

(Cut to: video of Tower 1 collapsing)

The ‘tribute’ continued for several more minutes, showing video of firefighters
and rescue workers, other scenes of destruction.

Everyone in the United States has inevitably seen dozens of actual tribute
videos to those who lost their lives on September 11, 2001. In most cases, these
videos overlay photographs of those individuals who died with the video of the
burning towers. There is, one could argue, a familiar vocabulary for tributes
to the victims of 9/11.

Rather than follow that standard and recognizable tribute format, however,
McCain’s video presented a political argument about Iran’s links to 9/11.

Never before had a major broadcast video so blatantly attempted to connect
the Iranian hostage crisis of 1979 to the Al Qaeda terrorist attacks of September
11, 2001.

Never before John McCain’s night at the Republican National Convention.

Interestingly, Keith Olbermann responded to the imagery in the McCain video
immediately after it was shown by apologizing to MSNBC viewers for imagery that
could be construed as a political exploitation of the emotions of 9/11.

No doubt, showing a 9/11 video at a political convention was emotional exploitation.
But it was also something much worse: it was blatant historical revisionism.
It was a cynical attempt to claim attacks on Americans–1979 and 2001–were
carried out by the same ‘enemy.’

What Olbermann should have apologized for was MSNBC’s accidental transformation
of their network into a mechanism of the most cynical kind of Orwellian propaganda.

John McCain did not make the link between 9/11 and Iran in his RNC speech,
but we can be certain that the video ‘tribute’ is a sign of what is to come
on the campaign trail between now and November.

The media’s responsibility from this point forward is clear: either they can
sit back and let McCain’s historical revisionism stand or they can move quickly
to debunk it.

Either way, it seems apparent that major broadcast outlets need to take a more
proactive role in pre-screening for blatant historical inaccuracies any video
a political party plans to show during a national broadcast–or at least preparing
to immediately debunk politically motivated inaccuracies.

John McCain will no doubt continue to exploit the pain of 9/11 in some vain
hope of political gain, and will continue to push historical revisionism about
the links between Iran and 9/11. The media, if it does its job, can be a crucial
counterweight that prevents false and militaristic propaganda from flowing freely
on our public airwaves.