DIRECT ACTIONS ON THE FIFTH ANNIVERSARY OF THE IRAQ WAR: DOWNTOWN SAN FRANCISCO

Join the March 19 DASW Text Mob to stay updated through the day:
Send a text to 40404 with the words ?follow dasw? (case sensitive,
no quotation marks). Standard rates apply.

On March 19, 2008 – the fifth anniversary of the U.S. invasion of Iraq – Direct
Action to Stop the War (http://www.actagainstwar.net/)
will be organizing a day of decentralized, multiple-target direct action against
government offices and war profiteers in downtown San Francisco. We have created
a list (see the website) of San Francisco offices of federal agencies, corporations
with military contracts or contracts in Iraq, politicians who have failed to
stop the war, and foreign embassies of countries linked to the war in Iraq.
We are focusing primarily on corporations with military or Iraqi contracts,
because we want to focus attention on the prominent role played by war-profiteering
corporations in the U.S. occupation of Iraq. We will take direct action on March
19th against as many of these locations as possible, in order to send a clear
message to the economic and political elites that control this country: No business
as usual until all U.S. troops are withdrawn from Iraq!

**How you can plug into the March 19th San Francisco Day of Direct Action:**

We?re asking that you:
1. Get together with a group of your friends, and plan a direct action against
a government or corporate office on March 19th.

2. If doing a direct action isn?t your cup of tea, there are many, many
other vital roles you can play in this action. Please come to our next organizing
meeting and plug in.

3. If helping organize this action isn?t something you have time for,
we?re asking that you take the day off work or school on March 19th, and
meet up with us at Market & Sansome starting at 7:30am. Snake marches will
be leaving Market & Sansome throughout the day, and going on “tours
of shame” of the different war profiteers in downtown SF (and supporting
the direct actions, which will be ongoing throughout the day). Please come out,
and invite your friends!

4. Come to the next March 19th working group meeting. This is a meeting for
folks who are interested in planning the action, coordinating the snake marches,
and helping out with other logistical needs.

Of course, we?re here to support you in any way we can. Email us at dasw.march19th
[at] gmail.com if you need any specific support, or have any questions.

Direct Action to Stop the War
takedirectaction [at] riseup.net
(510) 984-2566
www.actagainstwar.net

Stop the killing. Stop the maiming. Stop the economic and environmental devastation. Bring the troops home. Site has “Full Listing of Blogs in the March 19 Blogswarm Against the Iraq War,” which will be updated on a regular basis as more blogs join.
Participate/Learn More

Protest on the 5th Anniversary of the Iraq invasion! March 15th and
March 19th

Page features list of events in 19 or more US cities. 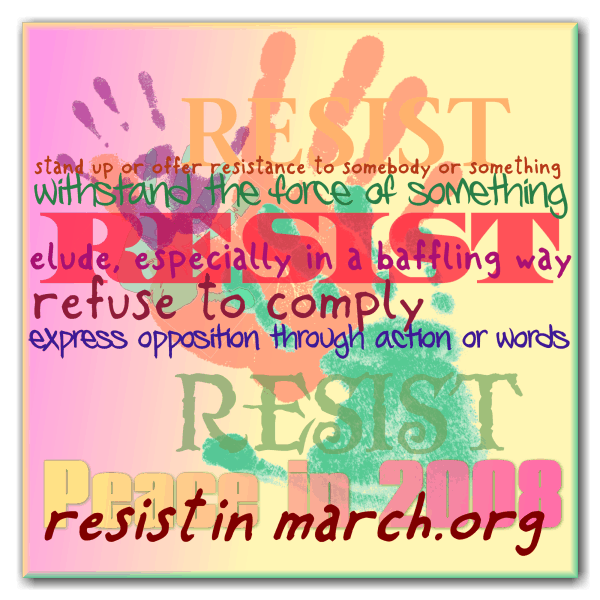 MARCH 16 to 18, 2008 (Sunday, Monday and Tuesday) in Washington, D.C.: Training,
Lobbying, Restoring the Constitution
Training in Nonviolence in preparation for March 19, Training in lobbying, Lobbying
and on the 18th: Take Back the Constitution Day.

March 17th
All day trainings & workshop at the Warehouse Theatre
6-8 p.m. ET at Busboys and Poets in DC, PDA and John Conyers and Jim Hightower
launch Health Care Not Warfare campaign: GET A TICKET.
8-9 p.m. ET listen to General William Odom discuss the need to withdraw from
Iraq on http://thepeoplespeakradio.net

Join us for a spirited day in the Halls of Power in Washington, D.C., from
Congress to the Justice Department to the Parties’ Headquarters to the White
House, and an evening event with Constitutional scholars and writers. This is
a call for impeachment, an end to the occupation, an end to torture.

9 am Meet Up: Meet at the CODEPINK House (712 5th Street NE, between G and
H) for a day-long Restore the Constitution Tour/March that will be marked with
actions at key points throughout Capitol Hill. The schedule is as follows…

10- 10:30 am Press Conference: Newseum Museum (555 Pennsylvania Ave, NW at
6th St.), a brand-new interactive media museum that has the 1st Amendment etched
into the front of the building’s stone structure!

10:30-11 am Restore the Constitution with Liz Holtzman: National Archives (700
Pennsylvania Avenue and Constitution, NW between 7th and 9th)

11-11:30 am Action at the Justice Department: Clean up your act! We will create
a laundry line of all the investigations, airing out the Administration’s dirty
laundry and more!

Noon-12:30 pm MOST WANTED Action: FBI at the J Edgar Hoover building (Pennsylvania
between 9th and 10th). We will target CODEPINK’s MOST WANTED Terrorists in DC:
Bush, Cheney and others. This action will continue on to the Reflecting Pool.
Special Cleansing at the Reflecting Pool with Visionary Activist Caroline Casey:
We will make a brew from all the stops in our “Peace and Justice Cauldron”.

2-5 pm Tour the Halls of Shame: We will be calling for Impeachment in Congress,
marchers to visit their Members of Congress’ offices on Senate and House side. 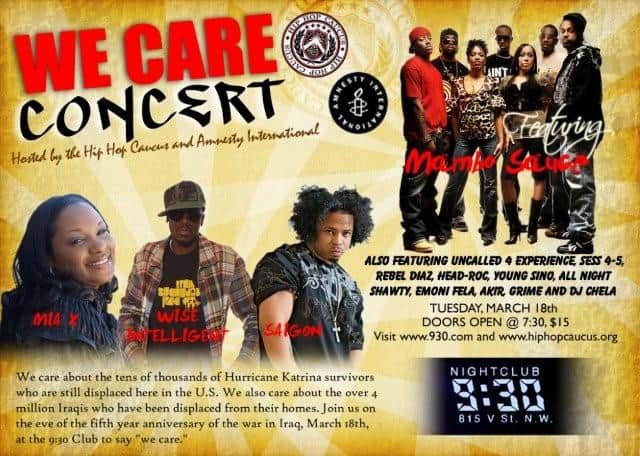 March 18 at 6 p.m.: The Hip
Hop Caucus and Amnesty International present the WE CARE CONCERT
We will highlight the plight of Internally Displaced Persons in the U.S. because
of Hurricane Katrina and displaced Iraqis because of the war in Iraq. Featuring:
Saigon, Mia X, Mambo Sauce, Wise Intelligent, Uncalled 4 Experience, GRIME,
Rebel Diaz, Sess 4-5, Akir, Emoni Fela, Head-Roc and more.
Pre-Concert Party in front of the 9:30 Club starting at 6:00 pm
Doors at 7:30 pm
Where: The 9:30 Club
815 V St. NW, Washington DC
Tickets: $15
Tickets can be purchased online at http://www.930.com (highly recommended) or
at the box office

MARCH 19, 2008 (Wednesday) Everywhere and in Washington, D.C.: Nonviolent
Resistance
Nonviolent Civil Resistance and/or Disobedience in All 435 Congressional Districts
and in the Nation’s Capital on the Fifth Anniversary of the Occupation of Iraq
Locations in each congressional district, to be determined locally, can include
congressional offices (Congress Members and Senators will be in their districts
on this day), federal buildings, military recruiters, weapons makers, war profiteers,
or corporate media outlets. In Washington, with Congress out of town, the focus
will be on war profiteers in the military industrial disaster-capitalism complex.
Where possible, events will include a place for people not willing to risk arrest.
Evening town hall forums can also include a larger audience.

FIND LOCAL EVENTS AT http://5yearstoomany.org AND IN A SEPARATE LIST AT http://worldagainstwar.org

Resources for promoting your event in the media: HERE.

Flyers and posters with room for local info: HERE.

8am – Blockade the IRS with War Resisters League and friends ? Help expose
the real cost of war by shutting down the IRS first thing in the morning and
making a clear statement to stop FUNDING war! Click here for more details.
1111 Constitution Ave NW (between 10th & 12th Streets)

*9:30am* – March of the Dead begins at the Women’s Memorial at Arlington Cemetery:
Activist Response Team (A.R.T.) and others who join us will imagine what would
happen if the dead, civilian and military, return to enter Washington to seek
justice for the crimes committed in Iraq and Afghanistan because of U.S. foreign
policy. In death masks, all in black, some wearing the name of someone killed,
others with statistics measuring the scale of the tragedy, we will proceed through
the city in small groups riding the metro, walking the streets and haunting
the periphery of the other actions. We will then converge at a given time all-together
to make the long march for justice with stops at the State Department, Justice
Department, and Supreme Court culminating with acts of civil resistance.

*10:15am* – Veterans ceremony with Buffy Saint-Marie in front of the American
Indian Museum

*5pm* – meet at the Reflecting Pool on the west side of the Capitol, march
to the Democratic National Committee Headquarters – bring pots & pans, drums,
noisemakers, signs, banners

Time Unknown: Shut Down the Military Recruiters Office on 14th & L with
the Grannies, bring your rocker and knitting needles and prepare to stay for
the day!

March 19, 2008, join a global movement rising up against war and global warming
by participating in a massive intervention in Washington DC or your own community.
We need to take immediate action to:

STOP the war in Iraq and future resource wars by ending our addiction to fossil
fuels.

SHIFT government funding to rebuild New Orleans and all communities suffering
from racism and corporate greed.

Veterans for Peace Events in DC on 19th: Arresting
Bush and Cheney.

Something you can do while you’re home:

IRAQ FAX-IN
March 19 marks the 5th Anniversary of Bush’s disastrous invasion and occupation
of Iraq – yet there is no end in sight. The costs so far are staggering: 4,000
young Americans killed, tens of thousands maimed… 1 million Iraqis killed,
millions maimed… $562 billion in tax dollars stolen from our children… $3
trillion cost to our economy through veterans care, weapons replacement, higher
oil prices, and the collapsing dollar. All that in just 5 years! We elected
a Democratic Congress in 2006 to bring our troops home, but they keep giving
Bush blank checks. Incredibly, Congress will soon vote on another $102 billion
blank check. On this 5th Anniversary, it is time for everyone who hates this
occupation to do something about it. And we’re making it as simple and effective
as we can. We’re calling it a Fax-In. It’s like a sit-in, only you can do it
from home. Fax an image to Congress that visually expresses how you feel about
the endless occupation of Iraq. Do it here: http://iraqfaxin.com