” In one volume, Mounting Evidence provides the most important evidence accumulated over many years that calls into question the government’s account of 9/11. Any citizen of conscience reading it will demand a new investigation.” -Mike Gravel, United States Senate, 1969-1981

There’s little doubt the tragic attacks on 9/11 soon became the defining events of our time, shaping much of what has followed. But even now, over a decade later, how well does the public actually understand them? Other researchers have written about key facets of 9/11-the fall of World Trade Center buildings, the air-defense failures, the backgrounds of the hijackers, or the role of the Saudi funders. This impressively researched volume, however, is the first comprehensive treatment of the many different angles. It connects the dots to reveal disturbing patterns. Years after many of us thought the Crime of the Century was solved, “case closed” additional evidence demands a closer look. These findings, which Dr. Rea presents in a lively, accessible way, call out for a new investigation. In Mounting Evidence , Dr. Rea shows how, by understanding the shattering events of that dark day, Americans can end seemingly endless wars, take back personal liberties they’ve lost, and restore their democracy. 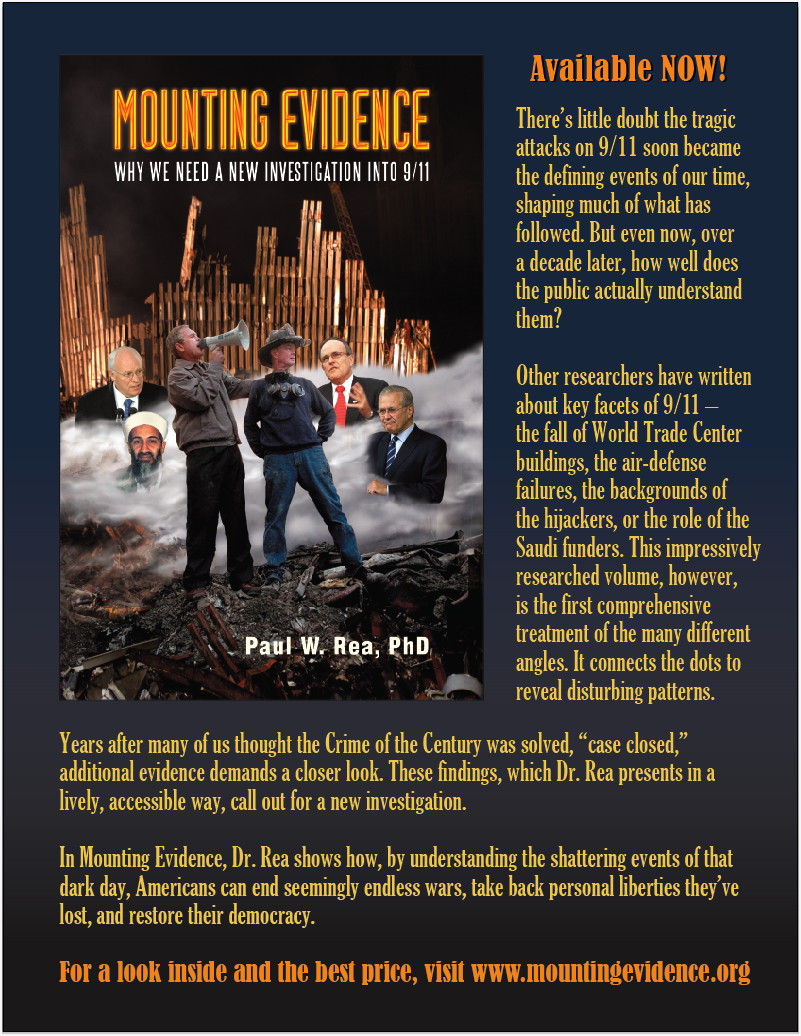 Paul W. Rea is a professor of humanities and has taught at Ohio State University and St. Mary’s College of California. Now a full-time researcher, writer, and activist, he works on peace and environmental issues. This is Rea’s third book.

Dr. Rea has put together a classic “Who dun it?” mystery. He has coupled the basic information about September 11, 2001 that has been given to the public by various sources with a thorough investigation of the unanswered questions which yet remain. These questions raise serious doubts about the authenticity of that which has been spoon fed us by the media. In the well recognized pattern of a good “Who dun it?” Dr. Rea leaves the reader with a multitude of suspects in our government who have yet to be called on to explain their actions. And the reader must ask, “How can we get another, this time unbiased, investigation?”

“Mounting Evidence” reads like a detective story, September 26, 2011 By Helen – 5.0 out of 5 stars – This review is from: Mounting Evidence: Why We Need A New Investigation Into 9/11 (Paperback)

“Mounting Evidence” accomplishes what no other book on 9/11 has even attempted. While other books have focused on various and individual aspects concerning the attack–the collapse of three buildings, the terrorists, or the air defense failures–Dr. Paul W. Rea has written a comprehensive lively treatment of ALL the many angles of this momentous attack. He connects the dots and demonstrates with impeccable documentation the disturbing patterns. His bibliography is also extensive. You can find it on his web site: […]. “Mounting Evidence” helped me to understand all the events that led to that tragic day. It’s truly a page turner that reads like a detective story.

Compelling information, September 20, 2011 By scotia – 5.0 out of 5 stars – This review is from: Mounting Evidence: Why We Need A New Investigation Into 9/11 (Paperback) “Since early on the morning of September 11th 2001, I’ve had a burning question on my mind which no one, not even my Congressman, has been able to answer: Where was the Air Force?

Having read Chapter 12 of Mounting Evidence, I am confident that the comprehensive evidence presented as a result of Dr. Rea’s painstaking and scholarly research will result in a long-awaited, truly independent, inquiry into the crime of the century.”

In Mountain Evidence Paul Rea has done a masterful job not only at dismantling the official explanation of the 9/11 attacks, pointing out the gaps in the story, but also at placing the events of the attacks and subsequent years within a larger historical context that demands an unflinching investigation. The book provides a critical tool for unraveling the tangle of deceit about the attacks and the actions of key policy makers who have never been held accountable for the disastrous course of American policy since 9/11. As Rea illustrates, the attacks of 9/11 were used as a pretext for foreign misadventures and as a corrosive element that has undercut democracy and civil liberties at home.

In seeking the truth behind the attacks and subsequent policy decisions, Rea shines a bright and necessary investigative light on policy deception, image manipulation and a lack of accountability by key policymakers and institutions. Importantly, Rea brings to light the nefarious connections between American agencies and al-Qaida operatives and sympathizers. Moreover, Rea convincingly makes the case that the attack produced winners, the Pentagon, military contractors, intelligence agencies, and losers, the American people and all those who have lost their lives in the aftermath of 9/11.

This is a necessary and damning treatise that is well researched and compelling in its analysis. Mounting Evidence is a must read for all Americans interested in learning the truth about a pivotal event in modern history, and hopefully righting wrongs committed in the name of national security. On this the tenth anniversary of the dastardly attacks, we can best honor those who died by uncovering the truth. Rea’s tour de force has made a major contribution toward this end.