Home Consequences Civil Liberties The Myth of the ‘War on Terrorism’

Originally published at Antiwar.com by Justin Raimondo on 7/13/16

Remember “We’re fighting them over there so we don’t have to fight them over here”? That was the justification for the worldwide war on terrorism the Bush administration trumpeted in the early days of the post-9/11 era. Keeping in mind that the American people don’t really care about what goes on thousands of miles away, and that the purpose of our foreign policy is – ostensibly – to keep us safe here at home, the Bushies and their neocon Praetorian Guard always kept their focus on the threat that was supposedly hanging over our heads: another 9/11. As that Old Right prophet Garet Garrett put it some sixty years ago, US foreign policy was rationalized to the public with “a complex of vaunting and fear,” and this was the fear part.

But now we hear that the latest iteration of the Terrorist Threat – ISIS – is losing ground in Syria, its home base: some 12 percent of its territory has been lost to a combination of opponents, and the Caliphate, we’re told, is shrinking. So does that mean the Terrorist Threat is abating, and we can get back to living our lives?

“IHS [Information Handling Services] senior analyst Columb Strack says that ‘as the Islamic State’s caliphate shrinks and it becomes increasingly clear that its governance project is failing, the group is re-prioritizing insurgency.”

“He told CNN: ‘As a result, we unfortunately expect an increase in mass casualty attacks and sabotage of economic infrastructure, across Iraq and Syria, and further afield, including Europe.’

“In other words, ISIS is going to become a more ‘traditional’ terror group, boasting of its international reach to attract recruits and bolster morale as it loses ground in Iraq and Syria.”

This preposterous shell game is becoming so transparently phony that not even the “experts” and government officials pushing it can possibly believe it.

In reality, the “war on terrorism” had nothing to do with protecting the American people from harm: it was always all about projecting US power as far as possible and effecting “regime change” throughout the Middle East. And not only there … 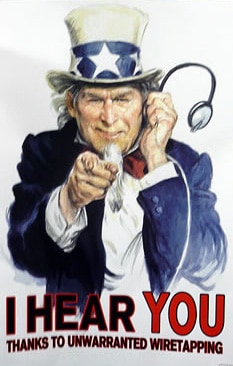 The real regime change came about right here in the good ol’ US of A: a system of universal surveillance was instituted as the “Patriot” Act was passed by a Congress that never bothered to read it. The police were militarized – after all, the Bad Guys were about to launch an attack on Peoria, or wherever, and we had to be ready. The banks were forced to report all “suspicious” transactions, and if you bought a pressure cooker your name went on a list of “terror suspects.” This was followed, more recently, by an attack by the Left on the Second Amendment: if your name is on a “terrorist watch list,” or the mysterious “no fly list,” the Nanny State would prevent you from getting your hands on a gun – and screw the Constitution.

Regime change at home and abroad – that’s the real point of the “war on terrorism.” The idea was and is to overthrow not only whatever government dares to get in the War Party’s way, but also to overthrow the Constitution and the rule of law in the United States. A real double-header!

In fact, our “strategy” empowers what might have been marginal terrorist groups, and seems almost designed to do so. We attacked Iraq, and created a power vacuum which al-Qaeda and ISIS filled: then we aligned with “moderate” jihadists in Syria in order to overthrow Bashar al-Assad and drain off support from ISIS. Instead we accomplished exactly the opposite of our intended goal: the “moderates” defected to ISIS and al-Qaeda, and the “Caliphate” grew in size and stature. Thousands of Muslims flocked to the region to fight the latest holy war. So we essentially re-invaded Iraq – Obama just sent in more troops, with more to come – and retook 12 percent of their territory. And now they’re spreading into Europe – and trying to reach the US, as they did in San Bernardino and Orlando.

ISIS split off from al-Qaeda over a strategic issue: where to concentrate their forces. The original strategic vision of Osama bin Laden was to go after the “far enemy” – that is, to hit America – and wait until going for their ultimate goal: the creation of a global “Caliphate.” ISIS disagreed with this gradualism, and determined that it was time to establish the Caliphate here and now. The advantages of this strategy were twofold: 1) It would show that they could actually govern, and that their program wasn’t just a nihilistic vision of destruction for its own sake, and 2) The Caliphate would attract foreign fighters in sufficient numbers to fight the infidels and win.

Like all successful revolutionaries, the leadership of ISIS employs an entrepreneurial strategic and tactical flexibility while never losing sight of its ultimate goal. So while the Caliphate may be losing territory at the moment, it is extending its reach to make the enemy pay a high price – and attracting more recruits in the process.

The idea that we can stamp out these terrorist outfits by going on the offensive in distant Syria, or wherever – denying them “safe havens” – is a delusion that never seems to die. That’s because the delusion serves the domestic interests of our rulers so well.

The “nations” of the Middle East were never real entities to begin with: the borders of Iraq, Syria, Jordan, and the Gulf states were determined by the European colonialists who carved up the remnants of the old Ottoman empire to suit their own purposes. And when these “nations” achieved “independence,” they did not suddenly become more real. What is happening today is the shakeout of competing factions along religious and ethnic lines: the Sunnis, the Shi’ites, the Kurds, etc. etc. are all asserting their right to self-determination. When ISIS demolished the flimsy barrier that separated Syria from Iraq, and proclaimed the abolition of the Sykes-Picot agreement, they were expressing their contempt for the post-World War I order imposed by the West – an order that is dying a bloody and chaotic death in spite of our futile efforts to preserve it.

So what’s the solution?

Terrorist attacks on the West won’t stop any time soon, no matter what we do or don’t do. Too much blood has been spilled, and the dead cry out for vengeance. We can’t undo the invasion of Iraq – the single most destructive act in the modern history of the Middle East – but we can stop making the same mistake unto eternity. As I’ve written before, we should quarantine the entire region. Stop intervening, and let the religious fanatics who are making the region a killing field stew in their own poisonous juices. Stop supporting the Saudis – the main agitators of jihadism; stop supporting Israel: stop supporting the Iraqi “government”; stop sending in troops – and concentrate our limited resources on making sure the terrorists don’t make it to the continental United States.

And if this be “isolationism,” then let the War Party make the most of it. Because the American people are done with global crusading. Enough is enough: let them kill each other if that’s what they’re intent on doing. Let’s just make sure that they aren’t killing us.