Bob
McIlvaine, Sr.
McIlvaine lost his son, Bobby McIlvaine, Jr., on 9/11.
Mr. McIlvaine attended every 9/11 Commission hearing and has been a vocal critic
of the official account of 9/11. As a member of September
Eleventh Families for Peaceful Tomorrows, McIlvaine has traveled all over
the world speaking about 9/11, his perspective on the events of that day, and
demanding justice for his son and the other innocents who perished along with
him.

Daniel
Hopsicker
An investigative journalist, author, and documentary film
maker, Hopsicker arrived in Florida two months after 9/11 to look into activities
of the alleged hijackers and their connection to Huffman Aviation. What he uncovered
became the basis for “Welcome to Terrorland: Mohamed Atta and the 9/11 Cover Up in Florida.” Hopsicker is still located in Florida and his up to date research can be found at http://www.madcowprod.com/.

Michele Little
Little lost her brother, FDNY Firefighter, David M. Weiss, on 9/11. Along with 9/11 Family Members Donna Marsh O’Connor and Christina Kminek, Little called for a real investigation into 9/11 at the National Press Club on 9/11/06. Michele is also an advocate for the First Responders of 9/11 and works to raise awareness of the health issues that these heroes are currently facing. She is also one of the founding members of http://www.2ndresponders.org/.

Sander Hicks
An author and investigative journalist, Sander delivers the type of hard-hitting journalism that all journalists should. Hicks is the founder of Soft Skull Press and the owner of the Vox Pop, a progressive coffee house and outlet for independent media and publishing. Hicks has done extensive research into the ISI/Pakistan connection to 9/11 and published “The Big Wedding,” detailing the whistle blowers and the many conflicts of interest within the 9/11 Commission. Hicks will speak about his current investigation into the mysterious death of Dr. David Graham.

Donna Marsh O’Connor
O’Connor lost her daughter, Vanessa Lang Langer. Along with 9/11 Family members, Michele Little and Christina Kminek, O’Connor called for a real investigation into 9/11 at the National Press Club on 9/11/06. O’Connor has been very active in recent years in spreading the truth about 9/11. She is also on the advisory board of 911truth.org/.

Barrie Zwicker
Zwicker is an award-winning Canadian alternative media journalist, documentary producer, and political activist. Mr. Zwicker’s presentation will pertain to “media blackout” of the alternative view of 9/11, a subject of which Zwicker has been published a book (“Towers of Deception) and produced three documentaries (The Great Deception, The Great Conspiracy, and Deep Complicity).

Jason Bermas
Bermas is a documentary film maker and activist. The two films Bermas has produced so far, Loose Change 2nd Edition and Loose Change Final Cut, are responsible for bringing the 9/11 Truth Movement onto the brink of becoming mainstream. Bermas is also the host of Louder Than Words Radio on the GCN Radio Network. Please visit http://www.loosechange911.com/ for more information.

Jon Gold
Longtime researcher and activist. Gold was instrumental in the production of 9/11: Press For Truth and has been an advocate for the 9/11 First Responders and the Feal Good Foundation. Gold is involved with “9/11Truth Tuesdays” at the Wayne Movie Theater in Wayne, PA, which has turned out to be an incredibly successful public outreach venue. To view Gold’s extensive 9/11 archive please visit: http://www.yourbbsucks.com/forum/index.php

Please help promote this great event by passing along this online flyer! 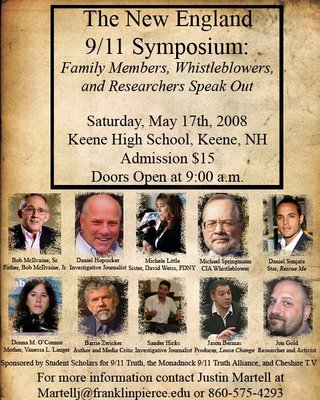