Last week the “Showbiz Tonight” program on CNN Headline News aired three programs we believe deserve commendation. We, of the 9/11 truth and justice movement in New York City are heartened that the network saw fit to air extensive segments giving fair coverage to Charlie Sheen’s comments about September 11th – as well as a platform for 911Truth.org spokesperson Mike Berger, uncompromising radio host Alex Jones, and Webster Tarpley, author of 911 Synthetic Terror: Made in USA. For the first time since the fateful day in September of 2001, mass-audience television broadcast alternative perspectives on what really happened. 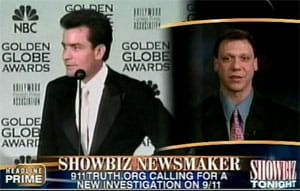 “We’re not the conspiracy theorists on this particular issue. It seems to me like 19 amateurs with box cutters taking over four commercial airliners and hitting 75% of their targets, that feels like a conspiracy theory. It raises a lot of questions.”

Now is time for all media to show some backbone and actually explore all the reasons why millions and millions of people no longer believe the Official Story of September 11th, 2001. Now is the time for those millions of people who do not believe the official story – a majority of this City’s residents, according to a 2004 Zogby poll – to realize that it’s safe for them to speak openly about their suspicions with friends, family and neighbors, to recommend books like Crossing the Rubicon and The New Pearl Harbor, or videos like The Great Conspiracy.

The CNN shows came on the heels of Charlie Sheen’s widely disseminated comments on the Alex Jones, in regard to his skeptical views of 9/11. The program ran a poll on the CNN website, in which 84 percent of more than 48,000 respondents had as of Sunday answered yes to the following question:

This should finally open the network’s eyes, and the eyes of its viewers, to the need for the airing of much more such information, information which is available. We urge CNN editors to review the “Top 40 Reasons to Doubt the Official Story of 9/11,” on the reverse, and pursue the stories that the mass-audience media have so far failed to cover. (Watch for the publication of the list with full explanations next week at 911Truth.org.) The public has a right to know what lays hidden beneath the facade of the official story on 9/11. Thank you CNN for taking a step in the right direction! Let’s see more 9/11 Truth!

“Do you agree that the U.S. government covered up the real events of the 9/11 attacks?”

If so, here’s something you can do right now:

(1) Send a message to CNN thanking them for their fair coverage of 9/11 on Showbiz Tonight.

(2) Let them know that they can count on your continued viewership – as long they continue to cover the question of whether 9/11 was an inside job fairly and openly, on CNN’s news programs as well as entertainment programs.

(3) Go to 911Truth.org and other 9/11 truth sites, inform yourself about the great deception that has been perpetrated on us, and get involved with putting an end to it!

Attend the weekly “9/11 Truth on Sundays” event series at St. Mark’s Church, with films and lectures leading authors and researchers of the 9/11 Truth movement, starting April 9th and almost every Sunday evening at 6PM. Schedule at http://www.summeroftruth.org

Contact for those wishing to get involved in New York: info@ny911truth.org