WASHINGTON (Reuters) – Seven years after the Sept. 11 attacks, there is no
consensus outside the United States that Islamist militants from al Qaeda were
responsible, according to an international poll published Wednesday.

The survey of 16,063 people in 17 nations found majorities in only nine countries
believe al Qaeda was behind the attacks on New York and Washington that killed
about 3,000 people in 2001.

On average, 46 percent of those surveyed said al Qaeda was responsible, 15
percent said the U.S. government, 7 percent said Israel and 7 percent said some
other perpetrator. One in four people said they did not know who was behind
the attacks.

The poll was conducted by WorldPublicOpinion.org, a collaborative project of
research centers in various countries managed by the Program on International
Policy Attitudes at the University of Maryland in the United States.

Respondents in the Middle East were especially likely to name a perpetrator
other than al Qaeda, the poll found.

Israel was behind the attacks, said 43 percent of people in Egypt, 31 percent
in Jordan and 19 percent in the Palestinian Territories. The U.S. government
was blamed by 36 percent of Turks and 27 percent of Palestinians.

The only countries with overwhelming majorities blaming al Qaeda were Kenya
with 77 percent and Nigeria with 71 percent.

The poll, taken between July 15 and Aug. 31, had a margin of error of plus
or minus 3 to 4 percent. (Reporting by JoAnne Allen; Editing by John O’Callaghan)

A new WorldPublicOpinion.org poll of 17 nations finds that majorities in only nine of them believe that al Qaeda was behind the 9/11 terrorist attacks on the United States.

In no country does a majority agree on another possible perpetrator, but in most countries significant minorities cite the US government itself and, in a few countries, Israel. These responses were given spontaneously to an open-ended question that did not offer response options. 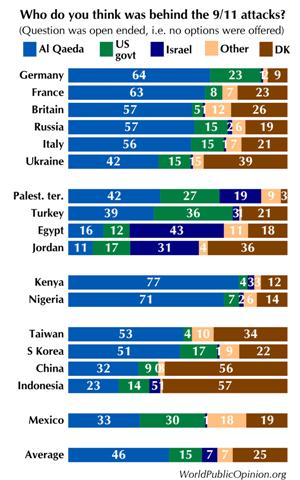 Given the extraordinary impact the 9/11 attacks have had on world affairs, it is remarkable that seven years later there is no international consensus about who was behind them,” comments Steven Kull, director of WorldPublicOpinion.org.

The only countries with overwhelming majorities citing al Qaeda are the African countries: Kenya (77%) and Nigeria (71%). In Nigeria, a large majority of Muslims (64%) also say that al Qaeda was behind the attacks (compared to 79% of Nigerian Christians).

The poll of 16,063 respondents was conducted between July 15 and August 31, 2008 by WorldPublicOpinion.org, a collaborative research project involving research centers from around the world and managed by the Program on International Policy Attitudes (PIPA) at the University of Maryland. Margins of error range from +/-3 to 4 percent.

Interviews were conducted in 17 nations, including most of the largest nations–China, Indonesia, Nigeria, and Russia–as well as Egypt, France, Germany, Great Britain, Italy, Jordan, Kenya, Mexico, the Palestinian Territories, South Korea, Taiwan, Turkey, and the Ukraine.

Respondents were asked “Who do you think was behind the 9/11 attacks?” and their answers were categorized into four response groups: “Al Qaeda,” “the US government,” Israel,” or “Other.” Any answers that approximated al Qaeda, such as “bin Laden” or “Islamic extremists,” were categorized along with those who said al Qaeda. Those who simply characterized the perpetrators as “Arabs,” “Saudis,” or “Egyptians” (3% on average) were included in the “Other” category.

Respondents in Asia have mixed responses. Bare majorities in Taiwan (53%) and South Korea (51%) name al Qaeda, but 17 percent of South Koreans point to the US government and large numbers in both countries say they do not know (Taiwan 34%, South Korea 22%).

Majorities of Chinese (56%) and Indonesians (57%) say they do not know, with significant minorities citing the US government (Indonesia 14%, China 9%).

A clear majority of Russians (57%) and a plurality of Ukrainians (42%) say al Qaeda was behind the attacks. But significant minorities identify the US government (15% in both cases) and large numbers do not provide an answer (Ukrainians 39%, Russians 19%).

Out of all countries polled, Mexico has the second-largest number citing the US government as the perpetrator of 9/11 (30%, after Turkey at 36%). Only 33 percent name al Qaeda.