Dear Friends and Fellow Advocates for Answers and Accountability,

As we look ahead to 2010, we at NYC CAN would like to offer our deepest thanks to everyone who contributed to a remarkable and historic campaign, and we would like to take a moment to celebrate the achievements that give us much to build upon in 2010.

2009 was a year of tremendous progress for our cause. Among a long list of successes, a peer-reviewed paper was published in a mainstream scientific journal documenting the discovery of active thermitic material in the World Trade Center dust; the petition of architects and engineers calling for a new investigation into the WTC destruction has leaped to nearly 1,000 signatories while founding member Richard Gage, AIA travels the world delivering his analysis of the buildings’ demise to thousands of concerned citizens and leaders. The increasing strength and credibility of our message is evidenced by the ever greater frequency of media breakthroughs casting a positive light on the questions we pose.

Thanks to your support, NYC CAN is proud to consider the ballot initiative campaign in New York among the many victories that furthered our cause in 2009. 80,000 New Yorkers — nearly 8% of the number who voted in the 2009 mayoral election in America’s largest city — signed a petition calling for a new 9/11 investigation. Just last week we learned one of those 80,000 signatories is a councilmember elect, intent upon helping us advance our cause with the local government once in office. A few hundred thousand more New Yorkers, while not prepared to take the leap of faith and sign the petition, were directly educated about the need for a new investigation. A dozen mainstream news outlets in the United States and Europe covered the campaign’s success, and perhaps most importantly, a tectonic shift occurred — after eight years of research and education, we have begun to collectively hone in on the endgame.

It is this “endgame” to which NYC CAN will continue to dedicate itself in 2010. In the months since the ballot initiative campaign ended, we have recuperated, reflected and regrouped. After committing more than a year to the single objective of a ballot initiative, NYC CAN’s approach in 2010 will expand to a multi-pronged pursuit of educational, legislative and legal avenues to bringing about a true investigation:

1) “Vote For Answers 2010”, a national campaign of local ballot initiatives aimed at moving 9/11 into the light of open public discussion and manifesting the public’s will for a new and truly independent 9/11 investigation.

4) “Common Sense”, an educational campaign tying all of NYC CAN’s efforts together, comprised of credible, expert spokespeople capable of winning the hearts and minds of the American people.

The first step on the promising road ahead is already underway. NYC CAN has teamed up with the Monadnock 9/11 Truth Alliance and other New Hampshire advocates to launch Vote For Answers New Hampshire.

Because only 25 signatures are required for the insertion of an article on New Hampshire town ballots, Vote For Answers New Hampshire has set an ambitious goal of placing its article on 40 town ballots across the state at local elections this spring. The article reads:

Shall New Hampshire’s Congressional Delegation be instructed to pursue a new and independent investigation to address thoroughly all of the evidence and unanswered questions related to the events of September 11, 2001? (The record of the vote on this article shall be transmitted by the Town of ________ to New Hampshire’s Congressional Delegation.)

Already, petitioning efforts are underway in 21 towns, and several Town Halls have confirmed the wording is appropriate to be placed on their ballot.

The campaign has been publicly endorsed by the Former Mayor of Keene Michael E.J. Blastos, as well as by a bipartisan lineup of current and former State Representatives including Peter Allen, Peter Espiefs, Betty B. Hall, Paul Harrington, Barbara Hull Richardson and Charles Weed. All seven local New Hampshire leaders have signed their names to the following statement to be printed in the Keene Sentinel and other local newspapers next week:

“As current and former public servants, it is our duty to raise our voice with those from across the country and around the world to call attention to the omissions and falsehoods in the official account of the events of September 11, 2001. The good people of New Hampshire are asked to sacrifice ever more in the War on Terrorism and yet there has been no true investigation into the events of September 11th for which this war is being fought. So long as our policies continue to be based on those tragic events, it will never be too late for honest answers to reasonable questions that to this day go unanswered. In defense of our nation and in defense of freedom itself, we must get to the bottom of what happened.”

If you live in New Hampshire or if you have friends in New Hampshire, please contact us at info@nyccan.org so that we can expand the reach of the campaign to include as many towns as possible. With success in New Hampshire we will pave the way for Vote For Answers 2010 to be carried out next November in a dozen other states that allow non-binding voter initiatives. 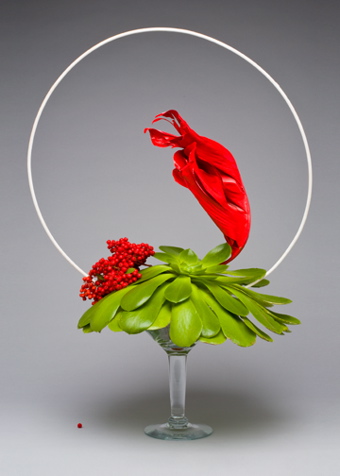 We will keep you updated as this effort and our other efforts unfold over the coming months. If you have skills or experience related to political organizing, public relations, legal work, graphic design or web design and you are looking for ways to contribute, we invite you to contact us and help shape the next step forward in 9/11 advocacy.

In closing, Janette MacKinlay — the courageous 9/11 survivor who gave the first sample of WTC dust to Dr. Steven Jones and has been an invaluable member of NYC CAN’s Executive Council — created a holiday arrangement of Ikebana art called “Flame of Truth” that she wanted to share with everyone to wish us all a warm and happy holidays. Her work is dedicated to finding solace and hope after September 11th — you can view more of it at JanetteMacKinlay.com .

From everyone at NYC CAN, we thank you for your incredible support, and we wish you a happy and enriching New Year. Together we can make 2010 a breakthrough year.