Home Consequences Other Important News Rep: Foreclosed owners should squat in their own homes

Originally published at RawStory.com by David Edwards and Stephen C. Webster on January 30, 2009 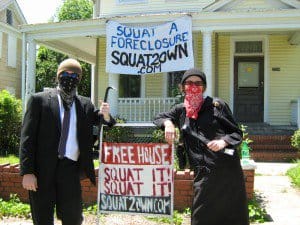 If you’re poor and the bank is coming for your home, Congresswoman Marcy Kaptur has a plan for you.

Yes, this Ohio Democrat is actually encouraging her financially distressed constituents whose homes have been foreclosed upon, to simply stay put.

In a Friday report, CNN’s Drew Griffin explored the case of Ohioan Andrea Geiss, whose home was foreclosed upon in April.

“Behind in payments, out of work, a husband sick, she had nowhere to go,” said Griffin. “So, she decided to follow the advice of her  Congresswoman and go nowhere.”

In Lucas County, Ohio, over 4,000 properties were foreclosed upon in 2008, reports CNN.

“So I say to the American people, you be squatters in your own homes,” said Congresswoman Kaptur before the House of Representatives. “Don’t you leave.”

She’s called on all of her foreclosed-upon constituents to stay in their homes and refuse to leave without “an attorney and a fight,” said CNN.

“If they’ve had no legal representation of a high quality, I tell them stay in their homes,” Kaptur told Griffin.

Kaptur is a high-profile advocate of an increasingly popular mode of fighting foreclosures best known for it’s key phrase: “Produce the note.”

By telling a bank to “produce the note,” a homeowner can delay foreclosure by forcing the lender to prove the suing institution is actually the same which owns the debt.

“During the lending boom, most mortgages were flipped and sold to another lender or servicer or sliced up and sold to investors as securitized packages on Wall Street,” explains the Consumer Warning Network. “In the rush to turn these over as fast as possible to make the most money, many of the new lenders did not get the proper paperwork to show they own the note and mortgage. This is the key to the produce the note strategy.”

And Friday’s segment on this growing foreclosure fighting “movement” was not the network’s first. Earlier in January, CNN explored one person’s strategy in demanding her bank “produce the note,” only to find that the lender had “lost or destroyed” the evidence of debt ownership. Such a revelation can significantly strengthen a homeowner’s position when asking to renegotiate a mortgage.

That these banks, many of which received billions of dollars in government bailout funds, continue to boot defaulted owners from their homes, makes them “vultures” says Kaptur.

“They prey on our property assets,” she said. “I guess the reason I’m so adamant on this is because I know property law and its power to protect the individual homeowner. And I believe that 99.9 percent of our people have not had good legal representation in this.”