(Washington, D.C.) — Rep. Rush Holt (NJ-12) today introduced the Anthrax Attacks Investigation Act of 2009, legislation that would establish a Congressional commission to investigate the 2001 anthrax attacks and the federal government’s response to and investigation of the attacks. The bipartisan commission would make recommendations to the President and Congress on how the country can best prevent and respond to any future bioterrorism attack. The attacks evidently originated from a postal box in Holt’s Central New Jersey congressional district, disrupting the lives and livelihoods of many of his constituents. Holt has consistently raised questions about the federal investigation into the attacks.

“All of us — but especially the families of the victims of the anthrax attacks — deserve credible answers about how the attacks happened and whether the case really is closed,” Holt said. “The Commission, like the 9/11 Commission, would do that, and it would help American families know that the government is better prepared to protect them and their children from future bioterrorism attacks.”

“Myriad questions remain about the anthrax attacks and the government’s bungled response to the attacks,” Holt said. “One of the most effective oversight mechanisms we can employ to get answers to those questions is a 9/11 style Commission.”

I’ve written repeatedly and at length about the huge questions that still remain with regard to the anthrax attacks, with a particular focus on the early and quite successful efforts (aided by ABC News’ Brian Ross ) to blame the attacks in the public’s mind on Saddam Hussein, followed by the extremely unconvincing FBI assertion last year that it was now-deceased U.S. Army research scientist Bruce Ivins, and Ivins alone, who perpetrated that attack.  The FBI’s case is riddled with glaring inconsistencies and numerous internal contradictions, enormous evidentiary holes, and pretenses of scientific certainty that are quite dubious (my interview with a scientist specializing in biosecurity over some of the scientific holes in the FBI’s case is here ).  Doubts about the FBI’s case continue to emerge .

Holt’s skepticism about the FBI’s claims is notable for several reasons.  It was Holt’s Congressional district from which the anthrax letters were apparently sent, and the attacks imposed a serious disruption on the lives of his constituents.  More significantly, Holt, who is a member of the House Intelligence Committee, is a trained physicist.  Before entering Congress, he taught physics as a faculty member at Swarthmore College and also headed the State Department’s Nuclear and Scientific Division of the Office of Strategic Forces during the Reagan administration.  Both his interest in this matter and his knowledge of it are at least as great as any other member of Congress.  That he maintains extreme skepticism over the FBI’s case and vehemently believes in the need for an independent investigation should, by itself, be quite compelling to any rational person (I interviewed Holt about the anthrax case in September of last year — here ).

But Holt is hardly alone in the doubts he expresses about the FBI’s claim to have solved the anthrax case.  An unusually wide and diverse range of even establishment voices have expressed the same doubts.

One of the two Senate targets of the attack, Sen. Pat Leahy, flatly stated at a Senate hearing last September that he does not believe the FBI’s case against Ivins, and emphatically does not believe that Ivins acted alone.  GOP Sen. Arlen Specter, at the same hearing, told the FBI they could never have obtained a conviction against Ivins in court based on their case — riddled, as it is, with so much doubt — and he also demanded an independent evaluation of the FBI’s evidence.  GOP Sen. Charles Grassley has been a long-time skeptic of the FBI’s anthrax investigation and has expressed serious doubts about the case against Ivins (see this interview I did with Sen. Grassley last year).

The ultimate establishment organ, The Washington Post Editorial Page, issued numerous editorials expressing serious doubts about the FBI’s case against Ivins and called for an independent investigation .   The New York Times Editorial Page echoed those views .   Even The Wall St. Journal Editorial Page, citing the FBI’s “so long and so many missteps,” argued that “independent parties need to review all the evidence, especially the scientific forensics” and concluded that “this is an opportunity for Congress to conduct legitimate oversight.”

In the wake of the FBI’s accusations against Ivins, the science journal Nature flatly declared in its editorial headline — “Case Not Closed” — and demanded an independent investigation into the FBI’s case.  After the FBI publicly disclosed some of its evidence against Ivins, The New York Times reported “growing doubts from scientists about the strength of the government’s case.”  The Baltimore Sun detailed that “scientists and legal experts criticized the strength of the case and cast doubt on whether it could have succeeded.”  Dr. Alan Pearson, Director of the Biological and Chemical Weapons Control Program at the Center for Arms Control and Non-Proliferation — representative of numerous experts in the field — expressed many of those scientific doubts and demanded a full investigation .

There may be legitimate grounds for doubting whether an independent, 9/11-type Commission of the type Holt proposes is the ideal tribunal to conduct a real investigation, but it is clearly the best of all the realistic options.  The only other plausible alternative — an investigation by Congress itself — is far inferior, as anyone who has observed any so-called “Congressional investigation” over the last decade should immediately recognize (here, as but one example, is the account I wrote about a House hearing last September attempting — with cringe-inducing ineptitude and total futility — to “grill” FBI Director Robert Mueller about the FBI’s case against Ivins).  How effective an independent investigative Commission like this will be will depend on the details of its structure — its subpoena powers, punishments for defiance, and the independence of its members.  That Rush Holt will play a key role, if not the key role, in overseeing its creation is a reassuring feature that the bill he introduced can be actually productive.

For reasons I’ve detailed previously , I actually believe that the anthrax attacks played a larger role than the 9/11 attack itself in elevating America’s fear levels to hysterical heights, which in turn put the citizenry into the state of frightened submission that enabled so many of the subsequent events of the Bush presidency.  The 9/11 attacks appeared to be a one-time extraordinary event, but it was multi-staged anthrax attacks — coming a mere four weeks later — that normalized and personalized the Terrorist threat.  As Atrios put it in his inimitably succinct style :

I’ve long been fascinated by the erasure of the anthrax attacks – which, in their own way, freaked out the country more than 9/11 did* – from our collective memory.

*People object when I suggest this, but while the 9/11 attacks were of course The Big Ones, anthrax was this creepy shit which was KILLING US THROUGH THE MAIL. While most people didn’t expect a plane to fly into their building, the anthrax attacks created a heightened sense of OMIGOD THIS COULD HAPPEN TO ME. 9/11 was terrible, but the anthrax attacks were terrifying to people.

Anthrax was what made things like “mobile chemical weapons labs” sound so scary. Not everyone agrees, but I think more than 9/11 the anthrax freaked the country out. 9/11 was horrible, but the anthrax made it seem like we’d reached a new era where some horrible creepy shit was going to happen every day.

And then it was all forgotten. 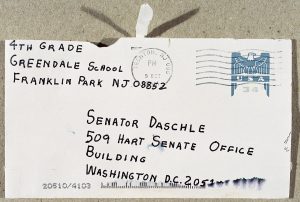 Whatever one’s views are on the abstract 9/11-anthrax comparison, there is no question that the anthrax attacks were a major political crime.   According to the FBI , the anthrax letters were directed at U.S. Senators (Leahy and Daschle) due to their political views (specifically their opposition to the Patriot Act, their allegedly “soft on terrorism” approach, and their pro-choice views).  And perhaps most importantly, the anthrax attacks — again, according to the FBI itself — came from a U.S. Army laboratory, perpetrated by a U.S. Government scientist.  As the aforementioned Dr. Pearson put it:

If Ivins was indeed responsible for the attacks, did he have any assistance? Did anyone else at the Army lab or elsewhere have any knowledge of his activities prior to, during, or shortly after the anthrax attacks? . . . .

It appears increasingly likely that the only significant bioterrorism attack in history may have originated from right within the biodefense program of our own country.   The implications for our understanding of the bioterrorism threat and for our entire biodefense strategy and enterprise are potentially profound.

Re-read that bolded sentence, which few dispute.  The self-evident significance of this case — combined with the extreme doubts being expressed by a wide range of ideologically diverse (and bipartisan!) establishment sources, along with mainstream scientists of all types — should make quick support for Holt’s bill an easy choice.  After all, if Ivins wasn’t the culprit and/or didn’t perpetrate the attacks by himself, then it means that those who did are still unidentified.

Speaking of investigations, The New York Times today suggests that yesterday’s release of those nine bluntly authoritarian Bush DOJ memos is increasing the political pressure for an investigation into crimes by Bush officials.  One would hope so (see this Andrew Sullivan post from yesterday as to why there those memos create a heightened urgency for such investigations).

This morning, beginning at 10:00 a.m. EST, the Senate Judiciary Committee is holding a hearing on Sen. Leahy’s proposal to create a Truth Commission to investigate detention, interrogation and surveillance crimes of Bush officials.  That hearing can be watched here .  Unraveling these strings — patiently and methodically, though relentlessly — is how one event can lead to another , how one disclosure can lead to others, and the entire ball can become unwound.