On Sunday 7th September, about 400 protestors marched in Brussels during the second edition of the United for Truth March. 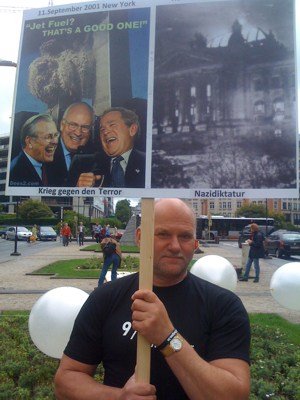 Despite the bad weather and the fact that the March took place during the same day as another popular event, the Belt (Belgian cycling event for the family), the number of protestors had doubled since the first edition of 2007. But measured against the enormous amount of work that went before it — months of campaigning in which literally thousands of posters had been put up — and the fact that the UFT-website announced that there would be at least 475 marchers, one cannot really say it was a tremendous success.

After a long wait to assemble at the Brussels Shuman Square (we were supposed to start marching at 2pm, but we got it underway only around 3pm), the trek through Brussels started. It was a 4 kilometer walk. What should have been the highlight of the march, was the handing over of our letter (demanding an independent inquiry into the events of 9/11), to an employee of the American Embassy in Brussels, became the low point of the day. One of the protestors, who went along with the delegates to hand over the letter, almost got arrested for merely running around with a camera. The delegates were turned away and told to send the letter by mail… For some, yours truly included, it was something not totally unexpected, but a letdown nonetheless.

Nevertheless, I think this March was a success for several reasons. 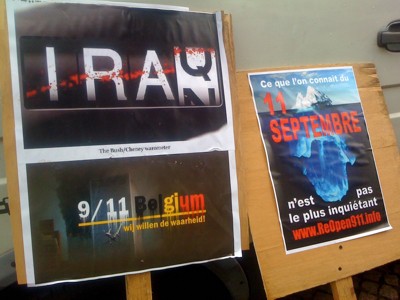 First, it became clear that more and more people demand an independent investigation. More than 10 nationalities were present in Brussels. If the crowd indeed increases with 200 every year, we should soon be able to actually get the mainstream media to notice us (I was able to spot one journalist that works for the RTBF, the French-speaking Belgian television, and apparently the March will be discussed during a talkshow on Belgian television on Wednesday 10th September).

Secondly, this March is a peaceful event. For two years in a row not one incident came to pass. That’s an accomplishment if you realize that many hotheads or agents provocateurs can usually be found in this kind of manifestation.

Thirdly — but that can only be judged in the coming weeks or months — several initiatives were announced at the end of the March that could give the European 9/11 Truth Movement an edge in the future towards the mainstream media. There is for example a plan to coordinate the activities of the separate European movements into one large platform, thus streamlining the information and actions to present not several different 9/11 Truth Movements in Europe, but ONE strong block.

Next year, 911Belgium.be will be there again… and hopefully you too!

Some pictures of last Sunday’s United for Truth March: 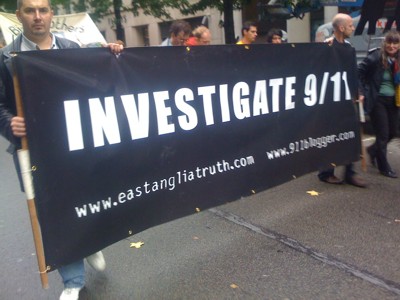 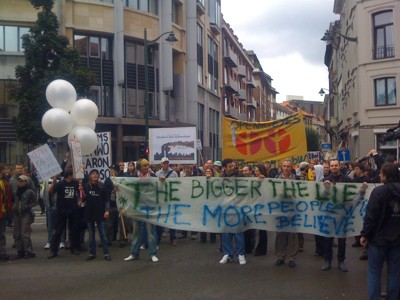