Consequences Other Important News Report from the WikiLeaks Press Conference

Report from the WikiLeaks Press Conference

(April 5, Washington, DC) Julian Assange and Wikileaks kept their promise of February 20 by releasing a video tape that shows civilians and reporter deaths from an attack by United States forces. The tape was presented at a 9:00 am press conference at the National Press Club in Washington, D.C.

Before the conference began, Assange described this as a “very rich story.” He opened with a brief statement and then showed the video tape. The edited and unedited versions of the tape are available here. WikiLeaks received the tape through unspecified channels. Assange did say that the leak to his organization “sends a message that there are some people in the US military who don’t like what’s going on.”

The video captures an incident on July 12, 2007 in a Baghdad suburb. This event has been a matter of controversy since a Reuter’s photo journalist, Namir Noor-Eldeen, and his assistant, Saeed Chmagh, were both killed in the incident.

Reuters described the scene as follows:

“Reuters has asked the US military to conduct a full and objective investigation into the deaths of two employees in Baghdad on 12 July. Photographer Namir Noor-Eldeen, 22, and driver Saeed Chmagh, 40, a father of four, were killed while working in the eastern area of the Iraqi capital.

“The cause of their deaths is unclear. The US military issued a statement describing the incident as a firefight with insurgents and said the killings were being investigated. Witnesses interviewed by Reuters said they saw no gunmen in the immediate area and that there had been a US helicopter attack, which police described as “random American bombardment”. Reuters reported it was doing everything it could to work with the authorities to find out how the men died, and was supporting the families.” Reuters, July 13, 2007

The Army never released the video tape from the two Apache helicopters responsible for the attack despite a freedom of information request and pressure by Reuters.

Today’s tape clarified the concerns about the killings and provided no evidence that this was an engagement with insurgents. Adult men are seen gathering on a street in the suburb of Baghdad. Assange pointed out that the two experienced Reuters journalists present seemed relaxed and casual despite the presence of the helicopters. WikiLeaks’ analysis showed the possibility of an RPG and possibly an Uzi machine gun. Uzi’s are legal weapons in Baghdad. RPG’s are a common weapon in the civil strife in Baghdad. As the Apache helicopter circled overhead, communication between the pilots seems bland and matter of fact. There’s the assumption that these are hostile forces but there is no indication of a “firefight.”

After the attack on the people gathered, the tape went on to show a van stopping to rescue Saeed Chmagh, the photojournalist assistant. People are seen loading Chmagh into the van. Recent investigation in Baghdad by WikiLeaks and their Icelandic media partners confirmed that the van was driven by the father of two taking his children to tutoring. The children were in the front seat and seriously injured. US military personnel arrived in an armed carrier and sent the children to an Iraqi hospital. Photojournalist Noor-Eldeen is seen run over by an armored personnel carrier. He and Chmagh both died in the incident.

Assange showed additional footage from the attack after a 20 minute gap in the tape, present when WikiLeaks acquired the video. In this instance, a building on a busy street is attacked by the same Apache helicopters. The tape showed one man entering the building, while the US military reported more. There was no reaction to the helicopters overhead by those seen on the street. Shortly after the helicopters began circling, they attacked the building with their onboard cannon.

In the question and answer period after the well attended video presentation, Assange pointed out that this was not the video tape from Afghanistan referenced previously by General David Petraeus. Wikileaks has the tape but is still analyzing it. Assange was asked why the tape wasn’t released immediately. He pointed out that analysis was a complex matter and WikiLeaks needed some on the ground investigation in Baghdad to make the tape as meaningful as possible.

He said that the tape was “conveyed” to WikiLeaks through the US military but would not say that the leak was provided by a member of the military.

The highly evocative tape will be seen around the nation and world today and, no doubt, form the basis for an ongoing investigation by Reuters which can now view what they requested nearly three years ago.

WikiLeaks has produced more scoops than the Washington Post has in the past thirty years according to a report by The Guardian. The web based service was “founded by Chinese dissidents, journalists, mathematicians and start-up company technologists, from the US, Taiwan, Europe, Australia and South Africa” according to their “About” page. WikiLeaks targets oppressive regimes throughout the world, as well as regimes seeking to repress information on illegal and unethical government actions and policies.

This article may be reproduced in part or in whole with attribution of authorship and a link to this article. 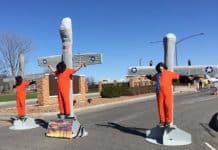 Destruction of Evidence Daniel Hopsicker - September 10, 2015
On the campaign trail in New Hampshire two weeks ago, Jeb Bush was asked a question for which he clearly wasn’t prepared,...

Undercover cops were among the unruly at DNC

Bush Insider Who Planned To Tell All Killed In Plane Crash:...

The Financial Times and the ‘Self-Confessed Mastermind of 9/11’