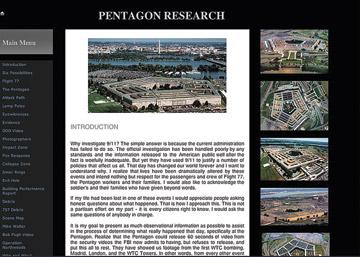 When the Sept. 11 terror attacks occurred, Russell Pickering was working as a professional firefighter in Seattle.

Especially because of his profession, he was deeply affected.

“The loss of firefighters and police was significant to me because of what I did,” he recalled.

His initial interest devolved into probing questions and eventually frustration that the federal government seemed unwilling to provide answers. From a network of contacts and information, Pickering has created a Web site about the attack on the Pentagon, www.pentagonresearch.com.

People should look at the evidence there and make up their own minds, he says.

“I don’t make any conclusions,” Pickering adds. “I have no partisan interest in this.”

Editor’s Note:
Courageous, fair-minded reporting like this is to be applauded, particularly in such a conservative area of the country. We encourage you to send letters in support of this excellent work. Send to Editor Bruce McCormack and author Buzzy Hassrick via the “Letters to the Editor” link at codyenterprise.com.

His curiosity was piqued when friends who served on Seattle’s urban search and rescue team returned from a Sept. 11 assignment in New York City, bringing questions about what they’d seen. They wondered why World Trade Center building 7 had seemingly collapsed for no reason.

Another factor was an article in the 105-year-old Fire Engineering magazine in which the editor expressed outrage that debris was removed without investigating why the buildings had collapsed. The writer also questioned the handling of the investigation.

Also puzzling Pickering were reports by NYC firefighters about secondary explosions in the two towers. When 9-1-1 transcripts were released in 2005 they contained accounts of those explosions.

The evidence gave credibility to the questioners who continued their probe. And it provided additional incentive for Pickering to question the events of Sept. 11.

“I feel it’s my patriotic duty to look into it and find out what we’re not being told,” he says. “We all have a right to know what happened.”

He served in the Air Force for six years and is respectful of the military.

In his examination of photographs from the attack on the Pentagon, Pickering says he’s found only a few images showing parts of the aircraft. Further, the FBI refuses to release evidence of aircraft debris and barred the National Transportation and Safety Board from investigating the scene.

The FBI also has 85 videos it refuses to release. One of Pickering’s research partners filed a Freedom of Information Act request for them. He says the agency at first denied the existence of the videos and then, on appeal, admitted to having 85.

The videos come from civilian, business and security cameras in the vicinity of the Pentagon, says Pickering, who wonders why the agency won’t share the information.

“There is no justification for not releasing it,” he says, adding that anyone can go to the Pentagon’s Web site and get all the details about the building. “There’s absolutely no security issue whatsoever.”

Questions about the plane persist, such as why the official passenger manifest contained neither Arab names nor names that aren’t accounted for, Pickering says. Further, the government has no positive identification of the five hijackers and barred involvement by the Virginia medical examiner.

Also barred from the site were members of the American Society of Civil Engineers, who based their subsequent report on indirect examinations, he adds.

Pickering is further puzzled by the history of the terrorist-pilot, who was denied access to a Cessna 172 three weeks before Sept. 11. Since the denial was based on his inadequate English and piloting skills, Pickering wonders how he could fly a jumbo jet.

“There may be answers for these things, but the government hasn’t put forth a single piece of evidence,” Pickering says. “I don’t think we were told the whole truth.

“As an American citizen, I’m entitled to answers.”

His quest has become a “personal passion,” says Pickering, who moved to Cody four years ago and spent more than a year researching before launching his Web site. That site now is getting more than 15,000 hits a month, he adds.

“It’s a duty to pursue this until answers are provided,” he says.

His sources include interviews with fire officials from the scene, an individual with a nine-minute video of the incident and other eyewitnesses. He’s also studied photographs and videos, searched the Internet and submitted FOIA requests.

“Whenever possible, I’ve gone to the source,” Pickering says.

He’s also consulting on a movie, “Loose Change 2nd Edition.” The movie is promoted at www.loosechange911.com as showing a “direct connection between the attacks of Sept. 11 and the U.S. government.”

Pickering’s resolve was recently buoyed by wide interest in an Internet radio show in which he participated. Along with tens of thousands of Internet viewers, he says 30 federal agencies and military-industrial companies logged into the program.

“If we didn’t have something important, they wouldn’t be interested,” Pickering says.

The views expressed in articles posted at 911Truth.org reflect the opinion of the individual writer, and are not necessarily those of 911Truth.org or the steering committee.