We have some good news and some bad news to share about our 13th Anniversary ReThink911 billboard, but don’t worry! We think the good news far outweighs the bad.

The bad news — unfortunately, we cannot go forward with the billboard directly in front of the New York Times Building. The group currently occupying it has a year-long contract. While they had agreed with the billboard company to take a break for the month of September so that we could have the space, the agreement allowed them to change their mind until the last minute, and unfortunately they exercised that option.

The good news — (and we think it’s really good!) – is that we found an even more stunning billboard just one block away at the corner of 42nd Street and 8th Avenue. Not only does this billboard draw maximum attention by facing in two directions while towering over one of the busiest intersections in Manhattan; but it’s also digital, which allows us to show practically life-size video footage of WTC 7’s symmetrical destruction. And that’s exactly what we plan to do! 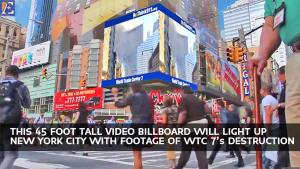 For 15 seconds out of every two minutes, people walking by will see WTC 7’s free-fall descent — the vast majority of them for the first time — on two massive 45’ by 45’ screens. Altogether, we’ll reach 100,000 people each day, amounting to 3 million viewings from September 8th to October 5th! The message will be simple and powerful, encouraging viewers to trust their instincts about WTC 7’s smooth, symmetrical downward motion — and follow up at ReThink911.org

Even though we will no longer be speaking directly to the folks at the New York Times, most Times employees will see the ad on a daily basis, thus making it impossible for them to ignore the truth about what happened at the World Trade Center on 9/11. The upside, of course, is that millions of people will be treated to a high-impact viewing experience of the truth about the third skyscraper destroyed on 9/11.

Once again, we would like to thank everyone who contributed toward the 13th Anniversary ReThink911 Billboard. We are disappointed, of course, that circumstances beyond our control did not allow us to follow through on the original plan. We hope, nonetheless, that you are as pleased as we are about the opportunity to show WTC 7 on enormous screens right in the heart of midtown Manhattan.

Stay tuned for the unveiling of the ad later this week!