Science has been misused for political purposes many times in history. However, the most glaring example of politically motivated pseudoscience—that employed by U.S. government scientists to explain the destruction of the World Trade Center (WTC)—continues to be ignored by many scientists. As we pass the 10th anniversary of the introduction of that account, it is useful to review historic examples of fake science used for political purposes and the pattern that defines that abuse. 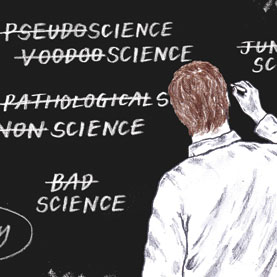 An early example of pseudoscience used to promote a political agenda was the concerted Soviet effort to contradict evolutionary theory and Mendelian inheritance. For nearly 45 years, the Soviet government used propaganda to foster unproven theories of agriculture promoted by its minister of agriculture, Trofim Lysenko. Scientists seeking favor with the Soviet hierarchy produced fake experimental data in support of Lysenko’s false claims. Scientific evidence from the fields of biology and genetics was banned in favor of educational programs that taught only Lysenkoism and many biologists and geneticists were executed or sent to labor camps. This propaganda-fueled program of anti-science continued for over forty years, until 1964, and spread to other countries including China.

In the 2010 book Merchants of Doubt, authors Naomi Oreskes and Erik Conway describe several other examples of the misuse of science, spanning from the 1950s to the present. They show how widely respected scientists participated in clearly non-scientific efforts to promote the agendas of big business and big government. Examples include the tobacco industry’s misuse of science to obfuscate the links between smoking and cancer, the military industrial complex’s use of scientists to support the scientifically indefensible Strategic Defense Initiative (SDI), and several abuses of environmental science.

As Oreskes and Conway made clear, science is about evidence. “It is about claims that can be, and have been, tested through scientific research—experiment, experience, and observation—research that is then subject to critical review by a jury of scientific peers.” In science, if experiments performed do not support a hypothesis, that hypothesis must be rejected. If conclusions fail to pass peer-review due to a lack of supportive evidence or the discovery of evidence that directly contradicts them, those conclusions must be rejected.

From Lysenkoism through the examples given by Oreskes and Conway, politically motivated pseudoscience demonstrates a pattern of characteristics as follows.

All six of these characteristics of pseudo-science are exhibited by the U.S. government investigation into what happened at the WTC on September 11th, 2001. That investigation was conducted by the National Institute for Standards and Technology (NIST) and it had much in common with the examples given by Oreskes and Conway. As with the false science that supported tobacco use, millions of lives were lost as a result—in this case through the “War on Terror.” Like support for the Strategic Defense Initiative, the abuses were focused on supporting the military-industrial complex. And as with the environmental examples, NIST’s manipulations affect everyone on the planet because they prop up a never-ending war.

In terms of historical experience, the destruction of the three WTC skyscrapers was unprecedented. No tall building had ever experienced global collapse for any reason other than explosive demolition and none ever has since that time. In terms of observation, nearly everyone who examines the videos from the day recognizes the many similarities to explosive demolition. Perhaps the most compelling evidence in favor of the demolition theory is that the NIST WTC Reports, which took up to seven years to produce, exhibit all six of the characteristics of politically motivated pseudoscience.

The lack of experiment:

NIST performed no physical experiments to support its conclusions on WTC Building 7. Its primary conclusion, that a few steel floor beams experienced linear thermal expansion thereby shearing many structural connections, could have easily been confirmed through physical testing but no such testing was performed. Moreover, other scientists had performed such tests in the past but since the results did not support NIST’s conclusions, those results were ignored(see peer-review comments below)

The results of experiments were ignored or contradicted in the conclusions:

There was no peer review and public comments from peers were ignored:

NIST published its own WTC reports and therefore its work was not subject to peer-review as is the case for all legitimate science. The people and companies involved in the NIST investigation were either government employees or contractors dependent on government work and were therefore not objective participants.

In terms of indirect peer-review, the international building construction community has made no changes to building construction standards in response to NIST’s officially cited root causes for the WTC destruction. Furthermore, no existing buildings have been retrofitted to ensure that they do not fail from those alleged causes.

NIST provided a period for public comment on its draft reports but the comments provided by those not beholden to government were not supportive of NIST’s findings. In some cases, as with NIST’s linear expansion claim for WTC 7, independent scientists submitted comments about physical tests they had performed (which NIST had not) that directly contradicted NIST’s findings.

There was one important exception to NIST’s ignoring of public comments. After a physics teacher’s well-publicized comments, NIST was forced to admit that WTC 7 was in free-fall for a vertical distance equivalent to at least eight stories of the building. Structural engineers have since noted that many hundreds of high-strength steel bolts and steel welds would have had to vanish instantaneously for an 8-story section of the building to fall without any resistance.

The findings cannot be replicated or falsified due to the withholding of data:

NIST will not share it computer models with the public. A NIST spokesman declared, in response to a Freedom of Information Act request, that revealing the computer models would “jeopardize public safety.” Because NIST’s conclusions depend entirely on those computer models, they cannot be verified or falsified by independent scientists.

False conclusions are supported by media or marketing propaganda:

As with the Soviet propaganda machine that supported Lysenkoism and the tobacco industry’s marketing propaganda, NIST’s pseudoscience was fully and uncritically supported by the mainstream media. Hearst Publications, the British Broadcasting Corporation (BBC), and Skeptic magazine are examples of media that went to great lengths to stifle any questioning of the official account and divert attention from the glaring discrepancies.

NIST depended on that media support as indicated by the timing of its release of reports. NIST’s final report appeared to be scheduled for dual political purposes, to coincide with the seventh anniversary of 9/11 and to give the appearance of finished business at the end of the Bush Administration. The timing of NIST’s other reports coincided with political events as well. These included the draft report on the towers in October 2004—just before the election, the final report on the towers—just before the fourth anniversary of 9/11, and NIST’s first “responses to FAQs”—just before the fifth anniversary. All of them appeared to involve politically motivated release dates.

The report release dates allowed time for the media to quickly present the official story while public interest was high, but did not allow time for critical review. With the report on WTC 7, the public was given just three weeks prior to September 11th, 2008 to comment on a report that was nearly seven years in the making.

Hypotheses that are supported by the evidence were ignored:

Throughout its seven-year investigation, NIST ignored the obvious hypothesis for the destruction of the WTC buildings—demolition. That evidence includes:

The WTC reports produced by NIST represent the most obvious example of politically motivated pseudoscience in history. The physical experiments NIST performed did not support its conclusions. The reports were not peer-reviewed and public comments that challenged the findings were ignored. NIST will not share its computer models—the last supposed evidence that supports its conclusions—with the public and therefore its conclusions are not verifiable.

These glaring facts should be readily recognizable by any scientist and, given the unprecedented impact of the resulting War on Terror, this abuse of science should be the basis for a global outcry from the scientific community. The fact that it is not—with even Oreskes and Conway ignoring this most obvious example—indicates that many scientists today still cannot recognize false science or cannot speak out about it for fear of social stigma. It’s possible that our society has not suffered enough to compel scientists to move out of their comfort zones and challenge such exploitation of their profession. If so, the abuse of science for political and commercial purposes will only get worse.

Kevin Ryan blogs at Dig Within.

We Were Lied to about 9-11: The Interviews

FBI had source in contact with bin Laden as far back...