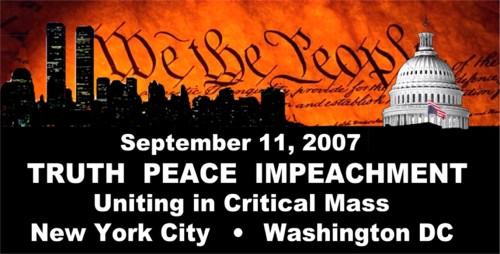 Speakers, Activists to Rally at White
House on 9/11 Anniversary

This year, on the sixth anniversary
of 9/11, a leading group of authors and activists from the impeachment, antiwar,
and 9/11 truth movements will lead a mass rally in front of the White House.
They will call for the impeachment of the Bush administration, an end to the
illegal wars in the Middle East, and a new investigation of the event upon which
these wars were predicated. This rally is being coordinated with similar events
in New York, Los Angeles, Brussels, Dublin, and other major cities around the
world.

Washington, DC, August 29, 2007 – A mass rally to commemorate the anniversary
of 9/11 will be held on Tuesday, September 11, 2007, from noon to 3:00 p.m.
at Lafayette Park, in front of the White House. The rally is sponsored by dc911truth.org
and will feature speeches by a number of leading authors and activists. It is
part of similar commemorations being held on the 11th and on preceding days
in New York and other major cities worldwide.

This event is the result of the collaboration of the 911truth movement with
members of the antiwar and impeachment movements. The message of the event is
three-fold: Impeach the Bush administration, end the war, and re-investigate
the crimes of September 11, 2001.

The rally will also celebrate the end of a long journey for walkers from around
the country who have come to Washington to highlight their cause. For March
of the People founder Mario Penalver, who has led the 800-mile trek from Chicago,
the message is “Impeach the Bush administration and bring our troops home.
” For Brother Raymond and Brother Elliot of Beit Shalom Ministries who
have walked 1500 miles from Denver, the message is “Real Christians don’t
choose war.” And for Vietnam veteran and pastor Bill McDannell who walked
across the continent from San Diego, the message is “End the wars.”

The rally will include live music and will feature the following distinguished
speakers:

A live webcast is being planned to link with events at Ground Zero and elsewhere
in New York City. Radio station WPFW-FM, the local Pacifica affiliate, will
be broadcasting part of the event, along with other special programs commemorating
the 9/11 anniversary.

dc911truth.org
is a grassroots organization of citizens, activists, and researchers seeking
to raise public awareness of the historical context of U.S. false flag terrorism,
culminating in the events of September 11, and to affiliate with others sharing
these goals towards peaceful reformation of the American political process.