Home Activism TAKE ACTION against Political Repression at the DNC and the RNC! 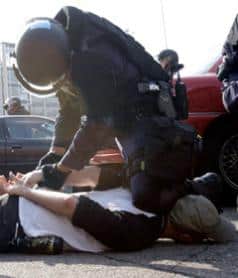 The police repression of anti-war protest that took place at both national political conventions deeply angered members of the peace community, as well as the many people in this country who were shocked at the behavior of law enforcement. There are those who might believe this brutalization of those who were peacefully demonstrating, with permits issued by the City, and which people believe is their ‘right’ under the Constitution, was an aberration or “over-reaction.”

However, what we saw was an emerging police state further testing new weapons and tactics, and learning how much they can get away with.

In St. Paul, the repression began with over a year ago with infiltration by paid informers of protest organizers, and “pre-emptive” raids on private homes and meeting places, leading to overtly political “conspiracy” charges. Police from around the country were led by Homeland Security in the wanton use of concussion grenades thrown in succession at retreating protesters; smoke bombs; an array of tear gas & pepper gas; wooden batons (bats); weapons, including AR15 automatic assault rifles drawn on unarmed and passive people; riot control horses and dump trucks with blades down as if to scoop up anyone in the streets.

This fierceness of control is what is done in Iraq and Afghanistan over the last 7-1/2 years in our names by our military and mercenaries alike, and what has and always will be done in communities of color when no one is looking . But now we see it going high-tech, and coordinated with charges of “furtherance of terrorism” under the Minnesota version of the PATRIOT Act.

818 people were arrested in St. Paul, including nearly 40 media from alternative and mainstream outlets. The “RNC8,” members of “The RNC Welcoming Committee,” are charged with felony “intent to riot in furtherance of terrorism” and face a sentence of 7-1/2 years.

People of conscience must stand together in outrage and not accept this repression from the government on the people. We cannot allow these actions to go quietly into the night and forgotten. A massive outpouring of support for the RNC8 is critical. Every detail of the illegitimate detentions in Guantánamo-like conditions, beatings, taserings, denial of medication, medical treatment, food, legal representation and threats must be uncovered, denounced, and never repeated.

We are seizing the opportunity to have our voices heard in unison, denouncing the fascist direction of this country. It is with the utmost urgency and for the sake of stopping the police state and reversing this course that WE WILL NOT BE SILENT.

By signing this statement we pledge to do everything we can to call attention to, and demand justice for those unjustly arrested and charged at the Denver and St. Paul protests.

Message to the local authorities of Denver & St. Paul against the violent police suppression of dissent

More coverage of political repression at the Republican Convention

World Can’t Wait was all over Denver when the Democrats met. More video & reports

Newly released footage, which was buried to avoid confiscation, shows riot cops arresting and abusing a giant group of people for nothing.

Now that we’ve had a few weeks to settle, a look back at Labor Day in the Twin Cities. Labor Day was of course also Day One of the Republican National Convention. Video was released today of an apparent mass arrest of utterly peaceful concert goers at the SEIU Labor Day concert .

My personal favorite moment in the tape is an off-camera exchange. Police in riot gear have surrounded loungers in a waterfront park. They announce, “Ladies and Gentlemen, You’re Under Arrest” and you hear one young woman say incredulously “Are you serious?”

Yep, I’m afraid they are.

Here’s the press release that came with the video, from the Glass Bead Collective:

ST. PAUL, Minnesota (September 18, 2008) Video released today shows the indiscriminate arrest of a crowd of two hundred at the waterfront across from a concert on Harriet Island Regional Park during this month’s Republican National Convention in St. Paul. The video includes multiple angles of the event as well as an interview with the cameraman who buried his footage and was one of almost two hundred people arrested for rioting without probable cause.

More than eight hundred people were arrested in St. Paul during the Republican National Convention. This video shows that at least twenty percent of the eight hundred plus arrested were seized without due cause.