Home Alleged Hijackers The Last Nail in the Coffin of the 9/11 Myth — Mohamed...

For almost a year and a half I have been in the loop on a most fantastic story involving the Herculean investigative reporting of Chris Emery, Holland Van den Nieuwenhof and crew from www.okcbombing.net

As hard as it was, I kept quiet and off the record, as the team investigated an angle of the 911 terrorist attack of 2001 which had Mohamed Atta (pictured right) and five of his alleged hijackers in Oklahoma City just days before 911, drunk, boisterous and brawling — Not a Koran, or prayer rug in site.

Last week – July 2008, they had reached the end of their investigation, and impenetrable walls of resistance prohibited them from going any further. Last Friday July 19th 2008 the Emery team decided to go public on my syndicated radio show, DEADLINE LIVE w/ Jack Blood. The result of which has sent shockwaves throughout the 911 truth community.

For the safety of all involved, the witnesses wish to remain anonymous until such time they can be guaranteed protection. All of the witnesses have given signed affidavits to Chris Emery. Documentation of the facts and evidence has been tucked away in safe houses in the USA and Canada. The evidence will later be released to Network Media, and the proper authorities.

The story started as the team was continuing their exhaustive research into the OKC Bombings of 1995. Almost accidentally they ran into witness after witness wanting to report that they had seen Atta and five 911 hijackers in Oklahoma City September 6th – 8th 2001.

On September 6th 2001 at 10 AM – 12 Noon – Mohamed Atta and four 911 hijackers were spotted at, of all places, the OKC National Memorial Museum by an employee who later told Emery that the five were speaking in a Middle Eastern dialect, and they had become “boisterous” inside the museum. The employee had to tell them to “Shut Up” and behave themselves or leave the premises. The five left the building immediately after calling attention to themselves.

The employee remembers the five lucidly, as in the entire history of the museum, no one had ever had to be asked to contain themselves. It was burned in the brain of the employee, and was recalled again a few days later when Atta’s cold stare was shown back on National TV after the 911 attacks.

The employee allegedly tired to report the incident to authorities but was ignored.

The 911 hijackers seen by witnesses with Atta have been revealed as: Abdulaziz Alomari, Saeed Algamdi, Ahmed Alnami, and Hamza Algamdi. (pictured in order below) 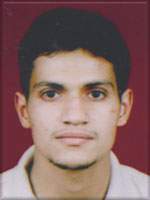 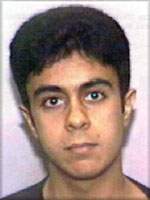 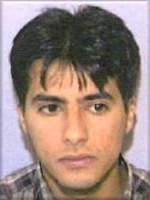 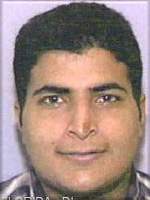 On Friday, September 7th 2001 (evening) Atta and crew turn up again at an OKC bar. ( To be named at a later date, but known to be frequented by police and spooks ) The group returned to the same bar the next night. The five were drinking beer and hard liquor, dancing, and eventually picking a fight with two local patrons. (Again very high profile / anti fundamentalist behavior, not easy to forget)

Atta, according to witnesses was the ring-leader and the one picking the fight, while his four cohorts stood at the ready to jump into the fray if necessary.

Chris Emery and team were able to obtain the Credit Card receipts from that night, and have spent most of the last 18 months attempting to trace the card numbers, and the authorization of the cards themselves. This was not an easy task as you could imagine. When fellow investigators found out what information Emery was trying to obtain, most decidedly bailed on any involvement. What was discovered in the end, was that the sequence of numbers on Atta’s credit card revealed a unique application only found on U.S. Government Credit cards. (Arranged such as to simplify accounting structures) Unfortunately, at this time, any further search for information about the card was halted, mainly through a lack of resources to continue the investigation.

One card number used by Atta and crew had been EXPIRED a full six months before the September 7th and 8th dates the card was used and approved at this local Oklahoma City establishment. ( Now you try to use a credit card that is six months expired and see what happens) This transaction was approved without delay.

What can only be deemed as Totally Damning to the case presented by the U.S Government, and the 911 Commission? A fifth hijacker, was back in this bar FOUR DAYS AFTER 911. He ordered the very same brand of hard liquor (never before sold in this bar) as had Atta. It was a unique brand of Dewers. This was also paid with another U.S. Government credit card, also 6 months expired. 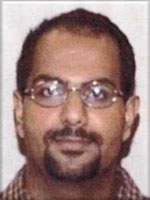 On Saturday – 9/15/01 (FOUR DAYS AFTER 911!) a mutual friend of Atta (who shook Atta’s hand and said something very briefly in Atta’s ear about an hour after Atta picks the fight with two club patron’s on Friday 9/7/01) comes back to the club with yet ANOTHER alleged hijacker identified in the photo line up as being Marwan Al Shehhi. (pictured left)

One witness notices this mutual friend of Atta and this new ‘guy’ are sad and somewhat depressed.

This mutual friend was a regular patron of the club for years and known by the witness as a trouble maker whom he’s kicked out of the club several times.

Saturday 9/15/01 this mutual friend brings in Mr. Al-Shehhi and says “they had friends that were killed…” and within seconds of answering this witness, Mr. Al Shehhi jumps over the bar and grabs this witness by the shirt collar and wants to fight with him. The witness pushes Al Shehhi away and yells at the mutual friend “What the Hell is his problem…” or something to that effect…

The witness repeatedly said he will NEVER forget the face of Al Shehhi as it was only 12 to 18 inches away from his for a full 10 seconds before he could push him away and off the bar.

There is much more to this amazing story which we will reveal in the coming days and weeks on DEADLINE LIVE and at www.jackblood.com

The purpose of this article is to lay a foundation to add evidence on top of. The Emery team, including blogger and radio host Andrew Griffin at www.reddirtreport.com will be doing everything they can, along with myself, to see this story through and to hopefully find some sympathetic reporters in the Main Stream Media. We are also seeking honest persons in law enforcement to follow up on leads we currently have.

At some point, like in every story, the search for truth itself becomes the headline.

We are asking you, the people of the USA, citizens of the world, and truth seekers everywhere to help get this story out as is, and to help circulate every new addition to the story as they come out.

More info on Chris Emery and Holland Van den Nieuwenhof can be found at www.okcbombing.net and they, along with Andrew Griffin of www.reddirtreport.com host a live talk radio show every Saturday at 6pm CST: THE RED DIRT REPORT / RADIO FREE OKLAHOMA on www.wtprn.com

On the DEADLINE LIVE interview originally broadcast on July 19th 2008 – Chris Emery and team presented the date of the incident with Al Shehhi as Sept 21 2001. This date has been corrected after re confirming with eyewitnesses to the date mentioned in the above article to Sept. 15th 2001.

The Full Original Interview Can Be Heard In The Video Here:

*Atta, Alomari, Al Shehhi, Algami, and Alnami were also named by the BBC as still being alive. *Although a Brooklyn apartment lease from 1995-1996 bears Ziad Jarrah’s name – and landlords there have identified his photograph – his family insists he was in Beirut at the time . * According to the Washington Post : (Link has been removed)

Two of 19 suspects named by the FBI, Saeed Alghamdi and Ahmed Alghamdi, have the same names as men listed at a housing facility for foreign military trainees at Pensacola.

Two others, Hamza Alghamdi and Ahmed Alnami, have names similar to individuals listed in public records as using the same address inside the base.

* One of the roads to 9/11 starts in Oklahoma in 1993 when, according to the 9/11 Congressional report, Osama bin Laden’s personal pilot came to Norman to train at Airman Flight School. Five years later this had become a trend, as the local office of the FBI warned of the large number of Middle Eastern men training in Oklahoma Fight schools in a memo titled, “Weapons of Mass Destruction” issued on May 15, 1998. The next year 9/11 hijackers Mohammed Atta and Marwan al-Shehhi, or men using those names, visited Airman Flight School once again to inquire about lessons. [Boston Globe] In September of 1999, the FBI finally got around to visiting Airman to ask about bin Laden’s pilot training there six years previously. [9/11 Congressional Report]

In February of 2001 the supposed 20th hijacker, Zacharias Mossaoui, trained at Airman in Norman and lived in a University of Oklahoma Dormitory. [Oklahoma Gazette] He later moved off campus into a house he shared with Melvin Lattimore, a man with links to the World Trade Center bombing in 1993 and the OKC bombing. In April of that year, the FBI documents that hijacker Salem al-Hamzi was seen visiting this house. That same month another hijacker, Nawaf al-Hamzi, was issued a speeding ticket in Oklahoma so he very well may have visited this 0ff-campus terrorist party pad also. And although al-Hamzi was seen at an al-Qaeda conference in Malaysia the previous year and afterward followed to the United States by the CIA, his name did not trigger any red flags when he was pulled over. [Daily Oklahoman]

Mossaoui later went on in August to be arrested in Minnesota by the local FBI despite much interference from their superiors. His roommate Melvin Lattimore wrote letters to the editors of local papers defending Mossaoui, but neglected to mention that he himself abandoned his lease on September 10, 2001.

Melvin Lattimore is an African-American, a prison convert to radical Islam, and was going by the name of Majahid Abdulquaadir Menepta at the time. Following 9/11, he was arrested for being a felon in possession of a weapon and imprisoned for fifteen months. According to last reports, he has returned to his hometown of St. Louis a free man, despite being linked to three terrorist attacks since 1993.

Before leaving for Minnesota, Mossaoui is documented as having a meeting at the Sands Motel in Oklahoma City with lead hijacker Mohammed Atta and Marwan al-Shehhi. This motel has proven popular among terrorists, for this same motel had been used the night prior to the OKC bombing by Tim McVeigh six years previously and had been a hang-out for Lattimore. [LA Weekly] According to Jayna Davis’ The Third Terrorist, a motel employee says that McVeigh left the motel that morning with another man in the Ryder truck, the mysterious John Doe #2, which reeked of diesel fuel. Witnesses also report that McVeigh left with what appeared to be a convoy of vehicles, including another Ryder truck. [OKBIC Interviews]

In August of 2001, following Atta’s and Mossaoui’s meeting in OKC, a plane ticket that was used in the 9/11 attacks was purchased at an OU library computer. According to the research of Michael P. Wright, the library assistant who witnessed this transaction said a white American male purchased the ticket.

Several 9/11 hijackers seen in OKC prior to attacks

ACTUAL RECEIPT OBTAINED IN THIS INVESTIGATION 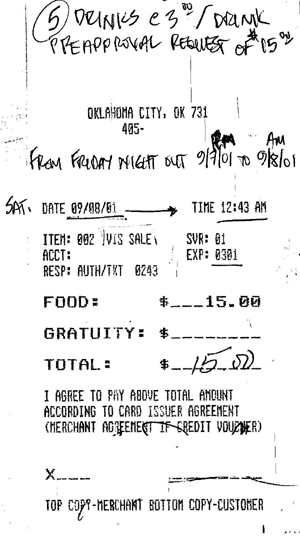