“The most persuasive argument I have seen for further investigation of the Bush administration’s relationship to that historic and troubling event.” – Howard Zinn, author of A People’s History of the United States

“It will be painful, and disturbing, to turn the pages of this thoughtful and meticulously researched book. But turn we must. For we owe the truth to those who died, and nothing less.” — Colleen Kelly, sister of Bill Kelly, Jr., who was killed in the North Tower of the World Trade Center on 9/11, and Co-Founder of September 11th Families for Peaceful Tomorrows. 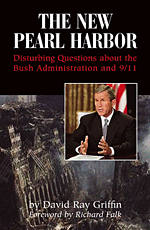 From a skeptical vantage-point, but also taking to heart the classic idea that those who benefit from a crime ought to at least be investigated, Griffin, an eminent philosopher and theologian, brings together an account of the national tragedy that is far more logical than the one we’ve been asked to believe. Gathering stories from the mainstream press, reports from other countries, the work of other researchers, and the contradictory words of members of the Bush administration themselves, Griffin presents a case that leaves very little doubt that the attacks of 9/11 need to be further investigated.

The disturbing questions emerge from every part of the story, from every angle, until it is impossible not to seriously doubt the official story, and suspect its architects of enormous deception. Long a teacher of ethics and systematic theology, Griffin writes with compelling and passionate logic, urging readers to draw their own conclusions from the evidence outlined. The New Pearl Harbor rings with the conviction that it is possible, even today, to search for the truth; it is a stirring call that we demand a real investigation into what happened on 9/11.

David Ray Griffin has been a professor of philosophy of religion and theology at the Claremont School of Theology in California for over 30 years. He is co-director of the Center for Process Studies there and the author or editor of over 20 books.

“That 9/11 has become a defining moment in our history cannot be gainsaid. But its exact significance is an exceedingly contentious question notwithstanding the seeming clarity of prevailing accounts. David Ray Griffin deconstructs those accounts with a host of unresolved puzzles strongly suggestive of some sort of culpable complicity by US officials in the event. His book presents an incontrovertible argument of the need for a genuinely full and independent investigation of that infamous day.” — Douglas Sturm , Presidential Professor of Religion and Political Science, Emeritus, Bucknell University

“David Ray Griffin has done admirable and painstaking research in reviewing the mysteries surrounding the 9-11 attacks. It is the most persuasive argument I have seen for further investigation of the Bush administration’s relationship to that historic and troubling event.” — Howard Zinn, author of A People’s History of the United States

“Was the U.S.’s failure to defend itself against the attacks on Sept. 11 a comedy of errors or a brilliant, if cynical, plot by highly placed government officials, or something else? We’ll never know as long as the administration stonewalls efforts to get information. But such relatively reliable information as is now available is assembled in this book, so that citizens can come to more informed judgments about the nature and functioning of our government. This is a must read for all who want to get past the conspiracy of silence and mystification that surrounds these events.” — John B. Cobb, Jr., Professor of Theology, Emeritus, Claremont School of Theology and

“This book is as full of research and authoritative notes as a field full of springtime daisies. The author raises frightening questions, and the questions beg for answers. One thing we can conclude for certain. The events surrounding 9-11, both before and after, cannot be simply swept under the rug of conventional wisdom unless we allow it. This book gives us a foundation to discover the truth, one that we may not wish to hear.” — Gerry Spence

“David Griffin’s The New Pearl Harbor belongs on the book shelves of all those who, in any way, doubt the veracity of the accounts presented to the public by the Bush administration concerning the worst terrorist attack in America’s history. The facts presented in this book are disturbing — and they should be. Griffin’s book goes a long way in answering the age-old question inherent in American political scandals: What did the President know, and when did he know it?” — Wayne Madsen, author, journalist, syndicated columnist