The first dramatic feature film to challenge the official version of 9/11 events, The Reflecting Pool, will screen twice a day July 11-16 and July 18 at the Pioneer Theater in New York City. The Reflecting Pool follows a journalist who teams up with the father of a 9/11 victim to investigate the official version of the events. What they find poses a disturbing question: To what extent was the U.S. Government at fault for the attacks?

Editor’s Note:
“The Reflecting Pool” is on tour across the nation, from New York to Oregon. Have a look at the schedule. Are you in or near one of these locations, or somewhere along the way? Would you like to host the filmmakers to show the film with a Q&A session afterward? An email from the Directors follows. Please get in touch with them right away. In the meantime, please forward the information here about this historic New York Pioneer Theater run, and the other tour stops, to friends in those cities. Thanks.

Los Angeles, CA (PRWEB) June 6, 2008 — The new investigative movie drama, The Reflecting Pool, marks its New York City premiere at the Pioneer Theater on Friday, July 11. This is the first time a dramatic feature film questioning the events of 9/11 will see an extended theatrical run in the United States. The movie will play twice nightly July 11-16 and July 18 with filmmakers Jarek Kupsc, Jodie Baltazar, and Joseph Culp in attendance for a question-and-answer after each show.

The Reflecting Pool follows an investigation by a skeptical Russian-American journalist who teams up with the father of a 9/11 victim to fact check the official version of the tragedy as documented in the 9/11 Commission Report. As they examine evidence and interview key eyewitnesses, the official story begins to crumble. The Reflecting Pool is the first investigative drama to present this issue in the spirit of such films as All the President’s Men and JFK.

September 11th, 2001, was a defining moment in modern history–an event that propelled America toward preemptive wars under false pretenses resulting in the deaths of over a million civilians in the Middle East, thousands of American troops, and a complete disregard for the Geneva Conventions not to mention the Bill of Rights. Writer/Director Jarek Kupsc plays Alex Prokop, a successful journalist who receives a mysterious 9/11 videotape revealing new information on the attack. Joseph Culp appears as Paul Cooper, the man who sent the tape and a driven researcher whose daughter died on 9/11. Though skeptical of conspiracy theorists and fearful that it will jeopardize his career, Prokop agrees to take on the story.

We follow Prokop and Cooper as they investigate the destruction of evidence from Ground Zero, the collapse of the 47-story WTC Building Seven, and the airliner attack on the Pentagon. The results of their investigation suggest the official version as presented in the 9/11 Commission Report purposely ignored or omitted evidence and testimonies to protect people in political positions, including the present administration. Prokop, plagued by the ghosts of his Communist childhood and trying to uphold the independence of American journalism, struggles to come to grips with this awful truth.

The Reflecting Pool is an intense, sobering analysis of the most controversial tragedy of our time — a thought-provoking study of a search for truth and the profound consequences of not looking for it any further than the nightly news.

Selected reviews “The Reflecting Pool presents a story that I have not taken the time or courage to touch.” –Barbara Trent, Academy Award Winner, The Panama Deception

“The film illustrates that, as so often is the case, the truth does not set you free; it ties your stomach and conscience into knots. It will remind you of All the President’s Men and JFK, films that also used drama to pursue political truths.” –Joel Hirschhorn, Op-ed news

“The script is top-notch, the characterizations moving. If the film has a flaw, it’s in trying to document so much evidence in a narrative thriller. Yet by and large, it pulls it off to deliver a chilling and effective message — maybe it can happen here.” –Jim Cirile, Screenwriters Magazine

About The Reflecting Pool: The Reflecting Pool premiered theatrically through American Cinematheque to a standing-room only audience on January 31, 2008, at the Aero Theatre in Santa Monica, CA. The film screened in limited runs in February and March in Los Angeles, San Luis Obispo, and continues with other selected screenings . The film is an official selection this summer at the Maine International Film Festival in July and the Moondance International Film Festival in August. The film was recently picked up by Rialto Theaters in New Zealand for this September.

About the filmmakers: The Reflecting Pool was independently produced and financed by Baltazar Works with Jodie Baltazar and Joseph Culp serving as producers. The Reflecting Pool is director Jarek Kupsc’s third feature film. He won multiple awards for his debut feature Recoil and won Best Picture for Slumberland in his native Poland. Kupsc gives his view: “Most of all we wanted to tell a human story about what happens to people when the truth is kept from them and show the struggle one must go through for their own sense of integrity.” He continues, “September 11th, 2001, was a defining moment in modern history–an event that propelled America toward preemptive wars under false pretenses resulting in the deaths of over a million civilians in the Middle East, thousands of American troops, and a complete disregard for the Geneva Conventions not to mention the Bill of Rights.” Culp says, The Reflecting Pool is a way of taking stock of what has happened to our country after 9/11 and to do the most American thing of all–ask questions and demand honest answers.”

About the Pioneer Theater The Pioneer is located at 155 East 3rd Street in New York City. It was built in January 2000 and premiered its first program, The Blank Generation, in February 2000. Ever since, The Pioneer has hosted a mix of independent premieres, revivals of classic films, film festivals, ongoing special series, and a place to catch those great films in New York that deserve an extended theatrical life.

Another interview here: Interview with Director Kupsc: Challenging the Unchallengable

Message from the Directors:

Dear Friends, We are proud to announce the much anticipated World Theatrical Premiere of the groundbreaking investigative drama THE REFLECTING POOL at the Pioneer Theater in New York City on July 11, 2008. This is a historic event. The first time a film challenging the official version of 9/11 has been given a theatrical run in The United States. Please join us for these landmark shows from 7/11-7/18 and pass this message to all your New York friends. We will be doing Q&A after every show.

Read about the New York 9/11 Ballot Initiative in The Village Voice . THE REFLECTING POOL supports this important action to establish a new independent investigation of the most controversial tragedy of our time.

We will follow the New York run with a series of screenings on the North-East and North-West coasts, culminating with Colorado. In late August and early September, we will be screening in New Zealand and Poland.

Thank you for your continued support! 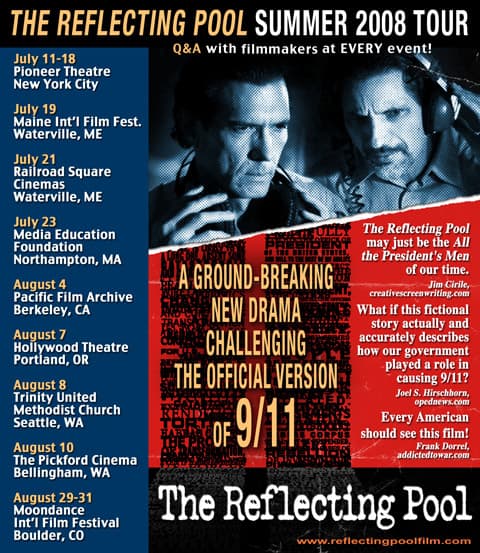