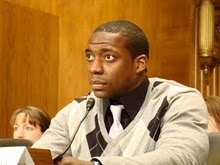 USA Today has posted an online poll asking whether readers think Champion should have dismissed Rashard Mendenhall as their spokesperson. As of last count, 65% of those voting think the company did the right thing. If you have not read this football running back’s Tweets, which initially stirred such “controversy” (read, blather for 24/7 sports “news” and fodder for haters), see this. Mr. Mendenhall’s clarification statement, published on his new blog May 4, is also reposted below.

As a mother of three young athletes myself, with ten more years of athletic equipment purchases in front of me, I can state with certainty I will never buy them another product made by this company and will be writing to let them know they should have been proud to have an intelligent, thinking athlete speaking for them.

Posted by Rashard Mendenhall on a blog here
Wednesday, May 4, 2011

I appreciate those of you who have decided to read this letter and attain a greater understanding of my recent twitter posts. I see how they have gotten misconstrued, and wanted to use this outlet as a way to clear up all things that do not truthfully represent myself, what I stand for personally, and any organization that I am a part of.

First, I want people to understand that I am not in support of Bin Laden, or against the USA. I understand how devastating 9/11 was to this country and to the people whose families were affected. Not just in the US, but families all over the world who had relatives in the World Trade Centers. My heart goes out to the troops who fight for our freedoms everyday, not being certain if they will have the opportunity to return home, and the families who watch their loved ones bravely go off to war. Last year, I was grateful enough to have the opportunity to travel over seas and participate in a football camp put on for the children of US troops stationed in Germany. It was a special experience. These events have had a significant impact in my life.

“What kind of person celebrates death? It’s amazing how people can HATE a man they have never even heard speak. We’ve only heard one side…”

This controversial statement was something I said in response to the amount of joy I saw in the event of a murder. I don’t believe that this is an issue of politics or American pride; but one of religion, morality, and human ethics. In the bible, Ezekiel 33:11 states, “Say to them, ‘As surely as I live, declares the Sovereign LORD, I take no pleasure in the death of the wicked, but rather that they turn from their ways and live. Turn! Turn from your evil ways!…”. I wasn’t questioning Bin Laden’s evil acts. I believe that he will have to face God for what he has done. I was reflecting on our own hypocrisy. During 9/11 we watched in horror as parts of the world celebrated death on our soil. Earlier this week, parts of the world watched us in horror celebrating a man’s death.

Nothing I said was meant to stir up controversy. It was my way to generate conversation. In looking at my timeline in its entirety, everything that I’ve said is with the intent of expressing a wide array of ideas and generating open and honest discussions, something I believe we as American citizens should be able to do. Most opinions will not be fully agreed upon and are not meant to be. However, I believe every opinion should be respected or at least given some thought. I apologize for the timing as such a sensitive matter, but it was not meant to do harm. I apologize to anyone I unintentionally harmed with anything that I said, or any hurtful interpretation that was made and put in my name.

It was only meant to encourage anyone reading it to think.