Originally published at CNN by Ray Sanchez on 8/3/14

The comments at a White House news conference were the President’s strongest on the controversial subject since he came into office denouncing what he described as the Bush years of torturing alleged terrorists, also known as “enhanced interrogation.”

“When we engaged in some of these enhanced interrogation techniques, techniques that I believe and I think any fair-minded person would believe were torture, we crossed a line,” Obama said. “And that needs to be … understood and accepted. And we have to, as a country, take responsibility for that so that hopefully we don’t do it again in the future.”

In the remarks, Obama was referring to a soon-to-be-released Senate Intelligence Committee report detailing the CIA’s controversial interrogation and detention program following the 9/11 attacks. 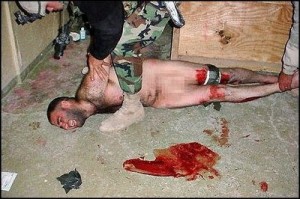 The document is a nearly 700 page summary of the full 6,800 page report that was approved a year and a half ago by a committee sharply divided along party lines.

Senators on the committee have said the report is critical of the CIA’s treatment of terrorism suspects, saying it amounted to torture — an allegation CIA officials have denied. It also finds that those harsh interrogation techniques did not help disrupt future terrorist attacks as many in intelligence community have claimed.

Sen. Dianne Feinstein said later Friday that the report’s public release will be delayed because of “significant redactions” by the CIA.

“We need additional time to understand the basis for these redactions and determine their justification,” the California Democrat said in a statement. “Therefore, the report will be held until further notice and released when that process is completed.”

The report was returned to the committee Friday. Its creation has been controversial, with the CIA director apologizing after admitting that the agency spied on computers used by Senate staffers who prepared it. A public version was expected to be released as early as next week.

In January 2009, President Obama issued an executive order disavowing torture and established a Special Task Force on Interrogation and Transfer Policies. Details of those findings have never been made public.

“After I took office, one of the first things I did was to ban some of the extraordinary interrogation techniques that are the subject of that report,” Obama said Friday. “And my hope is that this report reminds us once again that, you know, the character of our country has to be measured in part not by what we do when things are easy, but what we do when things are hard.”

In April 2009, Obama reiterated his position that waterboarding amounted to torture and “violates our ideals and our values.”

“That’s why I put an end to these practices,” he said at the time. “I am absolutely convinced it was the right thing to do — not because there might not have been information that was yielded by these various detainees who were subjected to this treatment, but because we could have gotten this information in other ways, in ways that were consistent with our values, in ways that were consistent with who we are.”