Case study: How the Commission went easy on Rumsfeld, Myers and Wolfowitz

ISSUE #1 On the morning of September 11, 2001, NORAD was running war games involving the scenario of hijacked airliners, while the National Reconnaissance Office (NRO) was running a drill for the scenario of an errant aircraft crashing into a government building, at the exact same time as an identical scenario was perpetrated in reality. The Air Force was in day two of annual drills testing all of its systems to respond to various threats.

“I had no idea hijacked airliners would be used as weapons.”

So said Rumsfeld, in his opening remarks to the Kean Commission on March 23, 2004. His final statement on the topic while under oath was, “I plead ignorance.”

Former White House terrorism adviser Richard Clarke’s testimony, one day later, was interesting, but amounted to little more than a distraction. There were more cameras on Clarke than on anyone else during the two-day national broadcast of the commission hearings. In reality, his testimony was nowhere near as interesting as the joint appearance by Donald Rumsfeld, Paul Wolfowitz and Richard Myers the day before. I do not question Clarke’s sincerity at this time, just the timing, which he did not choose. His book was released at a time chosen by the White House, and the testimony depended on the book. He had finished it well over 6 months before, but it was held up by the White House security clearance.

As a result, the book came out on the eve of Rumsfeld’s sworn testimony to the 9/11 Commission. Very clever if intentional, because it distracted everyone from two issues completely ignored by the commissioners, and overshadowed by Clarke and his book when they questioned Secretary of Defense Donald Rumsfeld: 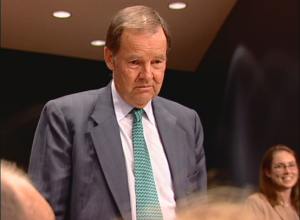 ISSUE #1 On the morning of September 11, 2001, NORAD was running war games involving the scenario of hijacked airliners, while the National Reconnaissance Office (NRO) was running a drill for the scenario of an errant aircraft crashing into a government building, at the exact same time as an identical scenario was perpetrated in reality. The Air Force was in day two of annual drills testing all of its systems to respond to various threats.

What role, if any, did Secretary Rumsfeld, Undersecretary Wolfowitz, and acting Chairman of the Joint Chiefs of Staff Richard Myers play in any war game scenario on the morning of September 11, 2001? What briefings did they receive about these wargames before, during, and after the morning in question?

ISSUE #2 On October 24, 2000, a mass casualty (MASCAL) emergency drill was conducted to test the Pentagon’s response to an airliner crashing into its headquarters. In the situation room, a model plane was set aflame within a scale model of the building, while emergency crews were dispatched to various places around the real building to test their response times. A military web site later published news of the exercise, with pictures. What did then Defense Secretary William Cohen tell his successor, Rumsfeld, about this drill during the transition process from the Clinton to Bush administrations?

Now how is it possible these two questions were “overlooked”?

Richard Ben-Veniste grilled Rumsfeld on the well-known threat of aircraft being used as weapons. In his long list of precedents for hijacked aircraft and attempted kamikaze attacks, Ben-Veniste conveniently left out the Oct 24, 2000 drill directly involving the Pentagon. (It should be noted that Ben- Veniste was Bill and Hillary Clinton’s Senate-appointed lawyer during Whitewater, as well as the attorney for Barry Seal, who use to fly cocaine from Honduras up to the Contra supply base at Mena, Arkansas while Bill Clinton was governor.) 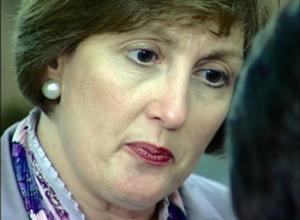 Of extreme interest was CIA adviser Jamie Gorelick’s question to Rumsfeld, following on Ben-Veniste’s line of questioning. She recalled being in a room with Wolfowitz, planning for the possibility of terrorists hijacking an airliner and crashing it into the Olympics. She found it incomprehensible that the possibility of this happening at the Pentagon had never occurred to either Wolfowitz or Rumsfeld.

But Gorelick also mentioned nothing about the October 24, 2000 drill at the Pentagon itself.

She went on to ask specific questions about when an order to authorize fighter pilots to shoot down aircraft was issued on the morning of September 11. Rumsfeld complicated and confused the question by shifting the focus to later in the day and describing how the events of the day modified the rules of engagement.

General Myers clarified by stating that, to the best of his recollection, the shoot-down order was communicated directly to the pilots shortly after the president issued it.

GORELICK: Was it your understanding that the NORAD pilots who were circling over Washington D.C. that morning had indeed received a shoot-down order?

RUMSFELD: When I arrived in the command center, one of the first things I heard, and I was with you, was that the order had been given and that the pilots’ correction, not the pilots necessarily, but the command had been given the instructions that their pilots could, in fact, use their weapons to shoot down commercial airliners filled with our people in the event that the aircraft appeared to be behaving in a threatening way and an unresponsive way.

GORELICK: Now, you make a distinction there between the command and the pilots. Was it your understanding that the pilots had received that order?

RUMSFELD: I’m trying to get in time because…

MYERS: Well, I think my understanding, I’ve talked to General Eberhart, commander now [sic] of NORAD, and I think he’s briefed the staff. And I think what he told the staff, what he told me, as I recall, was that the pilots did, at the appropriate point when the authority to engage civilian airliners was given, that the pilots knew that fairly quickly. I mean, it went down through the chain of command. (…)

RUMSFELD: (…) The reason I am hesitant is because we went through two or three iterations of the rules of engagement. And in the end, we ended up delegating that authority to, at the lowest level, I believe, to two stars.

GORELICK: I’m just trying to understand whether it is your understanding that the NORAD pilots themselves, who were circling over Washington, as you referred to in your statement, whether they knew that they had authority to shoot down a plane (…)

At first glance this seems like semantics, but in the context of what was really happening that day it may be quite significant. Whether or not a pilot has a shoot-down order directly communicated to him is of the highest significance given the fact that the pilot may not have known if he was still in one of the war games scheduled for that day.

Officials at NORAD have said that when the hijackings first occurred, they initially thought it was part of the Vigilant Guardian drills running that morning. Despite some confusion, once Flight 11 struck the World Trade Center at 8:45 a.m., everyone should have known this was not a test. However, this is still an assumption, because we do not know what the fighter jocks in the air at the time knew and did not know. We do not know the full extent of the orders they received, and it has never been explained why scrambled fighters were unable to intercept any of the hijacked airliners.

Scrambling aircraft simply means providing an Air Force escort to survey the situation. This has nothing to do with shooting down an aircraft. Such scrambling procedures occurred 67 times in the year prior to 9/11. The concept of this simple standard operating procedure failing from 8:28 a.m., when Flight 11 made an unplanned 100 degree turn to the south, until 9:38 a.m., when the Pentagon was struck, is inconceivable without a military order. Such an order, or multiple orders causing “confusion”, may have been scripted into the war game scenarios that morning. We do not know if this is the case, and it seems the Kean Commission doesn’t want to know, either.

It is possible that information regarding the war games running on the morning of 9/11 has been classified and cannot be discussed in public hearings. Considering the fact that the information provided here is open source and has been published by the likes of Jane’s Defense Weekly and the Associated Press, classifying the subject as a whole does not in any way help national security. If we do not face what really happened that morning, our national security is truly in jeopardy.

What was Rumsfeld doing on September 11?

In the past, Rumsfeld has gone on record saying that on the morning of September 11, he was in the Pentagon giving a lecture to members of Congress. He warned them to “expect the unexpected” with future terrorist attacks. Shortly thereafter, he was handed a note stating that the North Tower had been struck. Soon after that, he was told the second tower was hit. Rumsfeld claimed he continued with his lecture until the Pentagon was struck, at 9:38. This makes absolutely no sense. If the Secretary of Defense is lecturing to a Congressional delegation about the danger of surprise terrorist attacks, and if in the middle of that he is told two planes have hit both World Trade Center towers, it is beyond belief that he continues his presentation without reacting to the “unexpected” terrorist attack.

The fact that not one member of the Kean Commission chose to scrutinize Rumsfeld’s well-known statements speaks volumes.

The Project for the New American Century (PNAC), a non-profit organization founded in 1997 by prominent Republican leaders, called for a transformation of America to exercise military total spectrum dominance and unchallenged worldwide hegemony. The PNAC program, in a nutshell: America’s military must rule out even the possibility of a serious global or regional challenger anywhere in the world. The regime of Saddam Hussein must be toppled immediately, by U.S. force if necessary. And the entire Middle East must be reordered according to an American plan. PNAC’s most important study notes that selling this plan to the American people will likely take a long time, “absent some catastrophic catalyzing event like a new Pearl Harbor.” (PNAC, Rebuilding America’s Defenses (1997), p.51)

A catalyzing catastrophe did come, and since September 11 the policies that PNAC promoted have been put in place by PNAC’s own members. They occupy nearly all of the key positions in the Bush administration national security apparatus. Paul Wolfowitz, who was under oath alongside Rumsfeld at the March 23 testimony, signed on to the PNAC document which specifically referred to a “new Pearl Harbor” in a favorable light (in September 2000).

Donald Rumsfeld was a signatory to the PNAC mission statement, along with administration stalwarts Dick Cheney, John Negroponte, Elliot Abrams, Otto Reich and Zalmay Khalilzad, as well as Jeb Bush. For all of them, the Project for a New American Century amounts to a kind of public oath. The mission statement and the entire PNAC plan were published on the web at newamericancentury. org, years before the Bush administration came to power.

Since all of this information is open source, how is it that the commission managed to entirely ignore it when they questioned Rumsfeld, Wolfowitz and Myers?