Trouble in the Rubble was written by Vic Sadot after reading the Associated Press article on the 9/11 rescue dogs by Amy Westfeldt. It was run in the Washington Post on October 20, 2006. It also ran in the News Journal of Wilmington DE and numerous other papers on October 21, 2006.

It reveals the curious fact that many of the rescue dogs of 9/11 had their feet burned by “white-hot debris”. The reporter did not question or explain how this came to be. While this story is consistent with other reports of pools of molten steel still being “white-hot” many weeks after the free-fall collapse and disintegration of the World Trade Center towers, it is not consistent with the official conspiracy story that the towers fell into rubble as a result of jet fuel fires after Muslims flew planes into the World Trade Center buildings. The news story inspired this topical song. 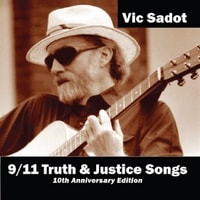 Vic Sadot is a singer-songwriter based in Berkeley, CA best known for his tribute song to the late-great Phil Ochs, Broadside Balladeer. He is now available for solo bookings & political protests in the Bay Area. See videos at www.youtube.com/vicsadot and hear songs at www.last.fm/music/vic+sadot